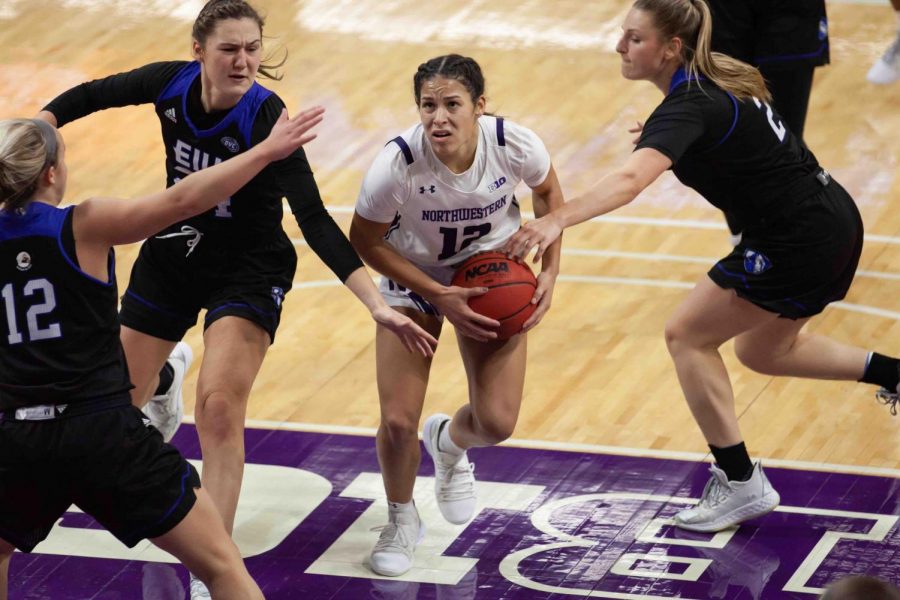 Veronica Burton drives to the basket. Burton scored a career-best 27 points to lead the Wildcats to a 70-54 victory over Purdue.

In just three games this season, Veronica Burton has sent a clear message to opposing defenses: key on Lindsey Pulliam at your own risk.

Purdue’s strategy Thursday night was clearly to limit the senior guard Pulliam’s production, and for the most part it worked — Northwestern’s leading scorer last year was just 3-for-16 from the floor and 0-for-6 from beyond the three-point line.

But the Wildcats won comfortably anyway, thanks to a clinic put on by the junior guard from Newton, Massachusetts.

“When you’ve got Veronica Burton, it kind of makes up for a lot of things,” coach Joe McKeown said. “She is so much fun to coach. Her basketball IQ is right there with anybody I’ve ever been around. She knows what all five people are doing on our team and the other team.”

The reigning Big Ten Defensive Player of the Year had been the Cats’ best offensive player in their first two games against Eastern Illinois and Minnesota, scoring 21 and 20 points, respectively — but she found another level Thursday.

Burton did most of her early work inside, scoring on a three-point play, a runner in the lane and a couple of driving layups in the first quarter. But on a night when NU struggled from behind the arc, making just five of 19 attempts, Burton was the Cats’ best option from outside as well, shooting 3-for-6 from three-point range.

“Whatever the defense gives me, I’m trying my best to take,” Burton said. “In the pick and roll options, I was able to attack, and my teammates were finding me open on the outside.”

Just like Monday night against Minnesota, Burton had a response every time Purdue tightened things up. Twice in the second quarter, the Boilermakers pulled within four, but both times, Burton immediately responded to restore NU’s lead.

With the score at 25-21, Burton received a pass from Pulliam on the right wing, dribbled once to shake a defender, and drained a step-back three. Later in the quarter with the Cats up 28-24, Burton drove to the basket around a screen from sophomore guard Laya Hartman, made the layup, got fouled and hit the ensuing free throw. Purdue never seriously threatened after that.

NU’s stellar defense, which forced 27 Boilermaker turnovers, was a big reason why. The Cats converted those turnovers into 29 points, and Burton was the leader on that end of the floor as well. Her five steals — three of which came during a two-minute stretch in the third quarter — were just shy of a career high.

Burton highlighted rebounding as an area where NU has room for growth, but considering they were undersized against Purdue and only had one fewer rebound, even there the Cats held their own. Junior forward Courtney Shaw, NU’s tallest regular, had nine rebounds — the same number as Purdue center Fatou Diagne, who stands four inches taller.

With two stress-free Big Ten wins in their pockets, the Cats will head back home for a non-conference tilt with Eastern Kentucky next Tuesday, then resume conference play on New Year’s Eve on the road against Nebraska.

“(Purdue) is one of the toughest places to play in the Big Ten, always has been,” McKeown said. “I thought our defensive effort tonight was terrific. We kind of negated their size advantage.”