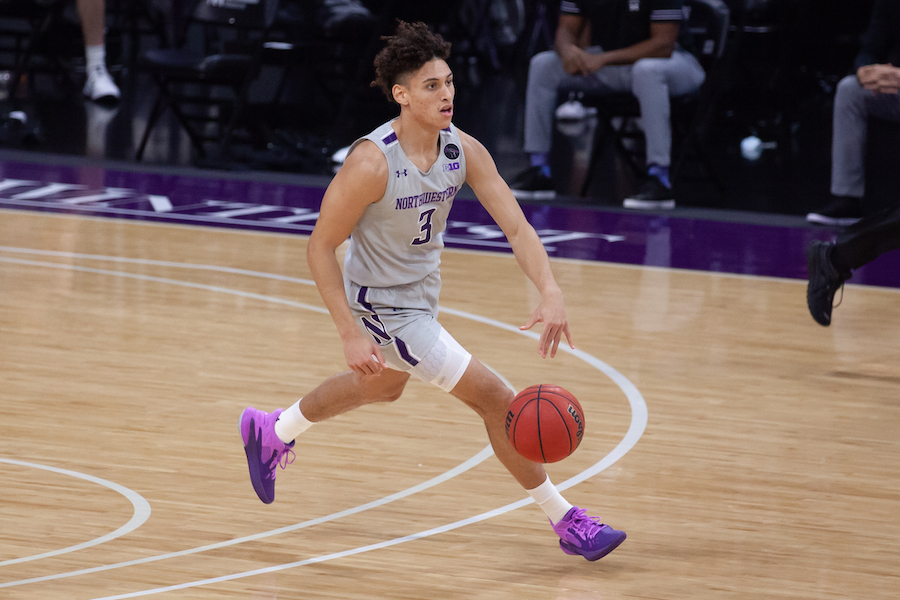 Ty Berry dribbles down the court. The freshman is one of many players seeing significant time for the Wildcats this season.

After a disappointing last-second loss to Pittsburgh on Dec. 9, Northwestern bounced back in a big way on Tuesday, scoring 100 points for the second time this season in their 100-48 victory over Quincy. This Sunday, the Wildcats (3-1) will face their toughest opponent yet in their Big Ten opener against No. 4 Michigan State.

Coach Chris Collins has tried out different lineups over the non-conference schedule within the team’s large nine-man rotation. Each of the nine players has played 20 minutes or more in at least one game this season, and Collins said the depth has helped them spread the ball and keep their offense flowing.

“During preseason, we tried to play with a little better tempo,” Collins said. “We wanted to play more possessions with this group, because we’re not a physical group… We used the last five days of practice to iron out our tempo and look when to be patient with when to attack. I thought we flowed a lot better — I thought you saw more connecting plays today.”

After the game against Pittsburgh, Collins said NU worked on their shot selection. The team practiced playing with tempo while still taking the time necessary to execute their offense, instead of taking the first shot available.

Moving forward, Collins said one of the bedrocks for the team in Big Ten play will be that depth, as compared to last season’s smaller rotation.

“Coming off the bench, we’ve got guys that can put the ball in the hole and make plays,” Collins said. “It keeps our other guys a little bit fresher. Our balance is going to be big. Night to night, you could see a different leading scorer, depending on what the game is giving to us.”

NU was the youngest team in the conference last season, and most of that central core returned for 2020. Gaining two new pieces in redshirt sophomore guard Chase Audige and freshman guard Ty Berry helps to expand from the smaller rotation the Cats played last year, as does the emergence of junior guard Ryan Greer.

Berry is making a name for himself early in his NU career, averaging 10.3 points per game, and shooting 52.9 percent from behind the arc on the season.

Redshirt sophomore center Ryan Young started every game last season. While he has come off the bench thus far, he continues to score efficiently as the only true center in the rotation. Young provided a key spark off the bench against the Panthers, with a season-high 13 points and 23 minutes.

Going into conference play, Collins said so many players getting significant playing time helps motivate everyone.

“They know they’ve got to give you good minutes in order to get another opportunity,” Collins said. “Any time you have depth, there’s always that fear of going to the bench, and that can be a good thing. If I’m not doing my job, if I’m not playing D and rebounding and taking charges and doing the little things, then we always say that your substitute will.”