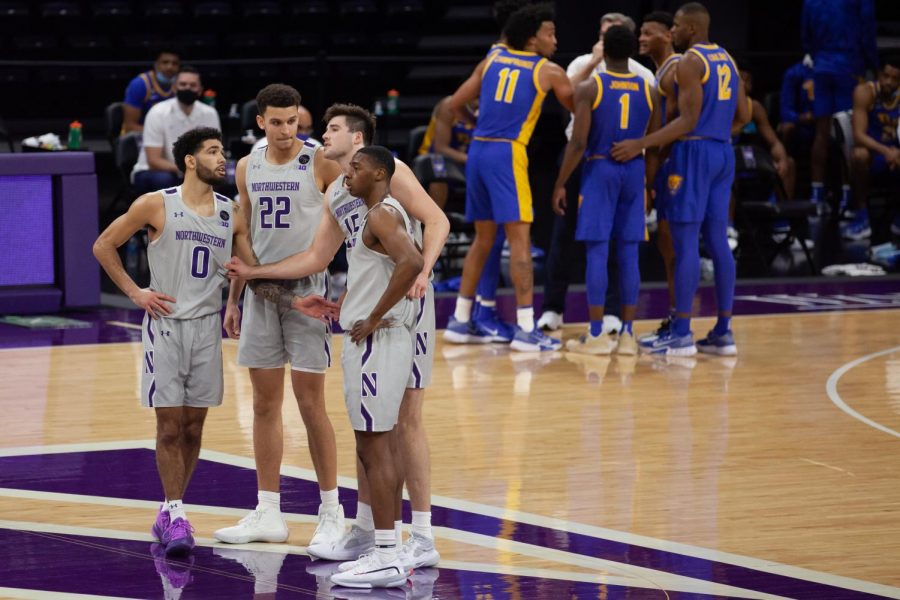 The Wildcats huddle during their ACC/Big Ten Challenge matchup against Pitt. Northwestern lost by a point after a disastrous final minute.

Pittsburgh sophomore forward Justin Champagnie had his way with Northwestern Wednesday night, scoring 20 points and pulling down 20 rebounds. But the lasting image — a dunk that gave the Panthers their first lead of the game with just 5.6 seconds left.

Playing in the primetime slot on ESPN, the Wildcats (2-1) crumbled in the final minute against the Panthers (3-1) to lose their first game of the season, 71-70. Pittsburgh, which made just 8 of 39 field goals in the first half, rained 49 points in the final frame to steal a victory in Welsh-Ryan Arena in the ACC/Big Ten Challenge.

“We led for 39 minutes and 55 seconds and we didn’t close the deal,” coach Chris Collins said. “There were a lot of positives along the way and a lot of things we have to get a lot better at, including closing the game.”

A couple days after NU dropped 111 points on Chicago State, it was the Cats’ defense that stole the show early. Pittsburgh missed its first 11 field goals and 18 of its first 20, and NU’s fast-paced offensive attack took a comfortable double-digit lead midway through the first half.

A 7-0 run by Pittsburgh cut the Cats’ lead to just 3, but NU answered back with seven straight points of their own. Despite a turnover-prone and inefficient first half on the offensive end, NU brought a 33-22 lead into the break.

“We took a number of really quick shots, guys just being anxious and excited to play,” Collins said. “The points came pretty easy the last couple of games. Now all of a sudden you get a team that is a good defensive team. We had our moments, and then there were other times we can get a lot better.”

The Panthers flipped everything around after halftime. After starting the game with just one basket in his first nine attempts, Pittsburgh junior guard Xavier Johnson made his first four to start the second half — including a trio of three-pointers — to pull the Panthers within a point halfway through the final frame. The Cats’ offense struggled to respond, hitting just one of its first eight field goal attempts to start the half.

NU kept its lead intact despite multiple Pittsburgh offensive runs and extended its advantage to eight points just under four minutes to go. The Panthers stayed within range and pulled within three points with 35 seconds to go, then a Femi Odukale steal of sophomore guard Boo Buie led to a quick Champagnie basket.

The Cats broke the Panther defensive pressure on the ensuing possession, but two missed free throws by Buie gave Pittsburgh the chance to take their first lead of the game with 16 seconds left. Champagnie dunked in the go-ahead points with just over five seconds remaining in regulation, and an airball by sophomore guard Chase Audige sealed a Pittsburgh victory.

“The two guys we really wanted to guard him with were Robbie (Beran) and (Anthony) Gaines and those guys were in foul trouble the whole game,” Collins said of Champagnie. “There’s a reason why he is where he is and he’s a good player. We tried to do what we could but he made some terrific plays down the stretch.”

The collapse was all too familiar for NU. The Cats’ second-half struggles were a recurring theme during conference play in the 2019-20 season.

NU is keeping the loss in perspective as they near the end of their non-conference slate, sophomore center Ryan Young said.

“This is our first real experience with this team being in a close game,” Young said. “We know we’re going to be in more games like this moving forward, so it’s something we’re going to work on.”