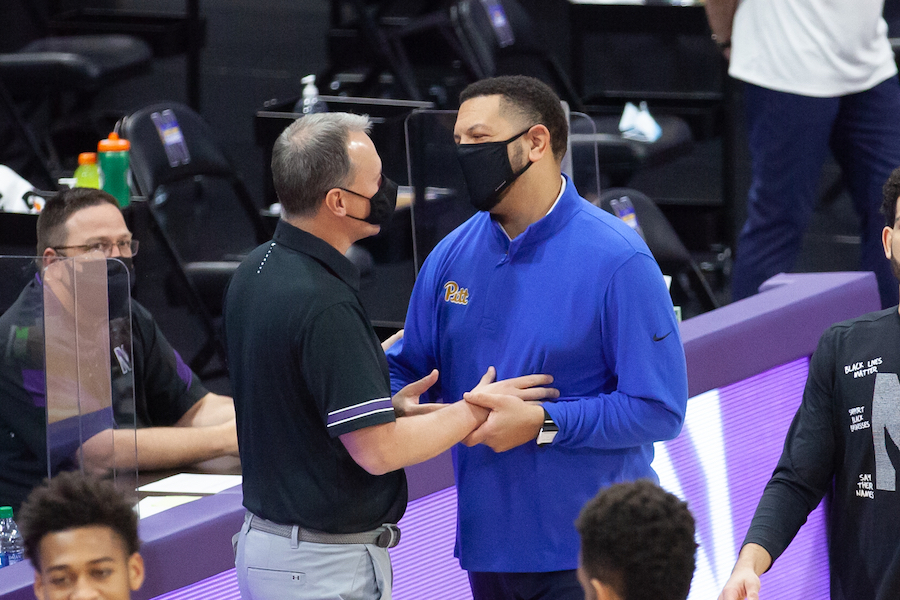 Chris Collins and Jeff Capel speak before Wednesday’s game. Capel expressed concerns prior to the game about playing as COVID-19 cases increased nationwide.

However, Collins does not agree with them, joking that he’s “disowned (Capel) for those comments” and “erased him from his phone.” Because of the rigorous Big Ten testing program, Collins said he and his players and staff think playing is safe.

“We test every day,” Collins said. “We’re doing a great job here to try to keep our guys safe. That is always going to be the number one priority: health and safety.”

Aside from pulling out of the early-season Hall of Fame Classic — a decision made out of general concern for the pandemic and not due to COVID-19 cases within Northwestern’s program — no Wildcat games have been canceled or postponed so far this season.

But the pandemic continues to ravage the Chicagoland area outside the walls of Welsh-Ryan Arena. In Cook County, the seven-day average case total at time of publication is 3,422.7.

“People are saying the next six weeks are going to be the worst,” Krzyzewski said Tuesday. “To me, it’s already pretty bad. On the other side of it, there are these vaccines that are coming out. By the end of the month, 20 million vaccine shots will be given. By the end of January or in February, another 100 million. Should we not reassess that? See just what would be best?”

According to Collins, one of the most challenging parts of the pandemic schedule is that the Cats spent Thanksgiving on campus with the team. Players will remain on campus for Christmas and the remainder of the winter holidays, with games against Indiana on Dec. 23 and Ohio State on Dec. 26.

“The level of sacrifice that’s been made by these guys — they’ve had to really give up a lot of things that are important to them, including family time.” Collins said. “But they love to play basketball. Although it is a huge sacrifice, every one of our guys will tell you that they’re willing to do this, if this is what they have to do to play. I feel terrible.”

NU has yet to hit the road this season, which they will do for the first time for their game in Bloomington against the Hoosiers on Dec. 23, but Collins said he thinks their close proximity to most Big Ten schools will help them travel more safely and distantly via bus. The Cats plan on making as many trips as possible on the ground, he added.

Despite concerns from some peer coaches, Collins doesn’t think it’s time to reassess the season. He said he believes in the Cats’ staff and players’ ability to stay safe and prioritize the health of the players and knows how much his team wants to play.

“The moment it gets to a point where our administration and me and our staff feels like it’s not going to be safe to play, then we won’t,” Collins said. “But until then we’re going to do everything possible to help these guys get on the court in a safe and healthy way.”