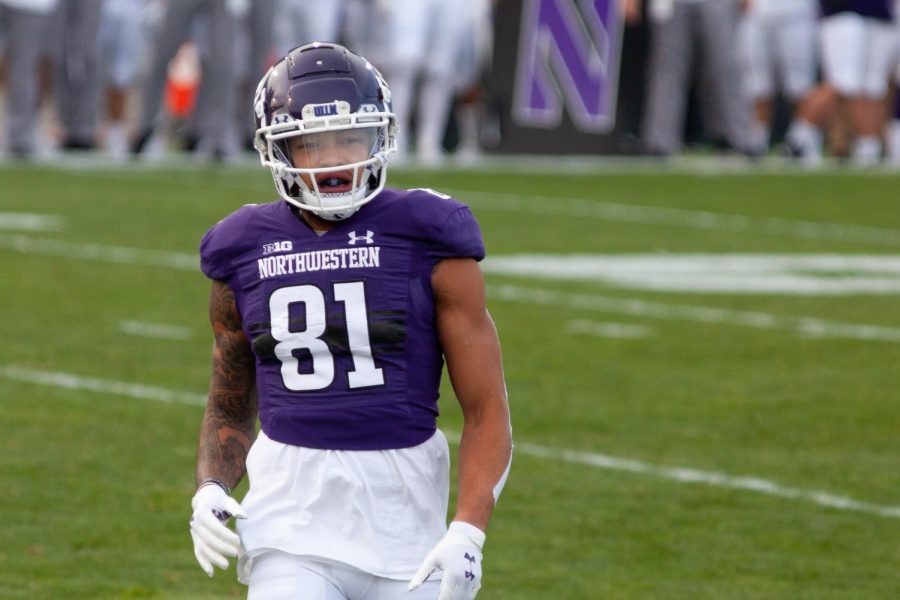 Ramaud Chiaokhiao-Bowman looks on. The wide receiver signed with the Indianapolis Colts as an undrafted free agent. (Daily file photo by Joshua Hoffman)

Ramaud Chiaokhiao-Bowman looks on. The wide receiver signed with the Indianapolis Colts as an undrafted free agent.

With a little over one minute remaining in the first half, then-No. 19 Northwestern stood at then-No. 10 Wisconsin’s 25-yard line.

The winner of the game would control its own destiny for a Big Ten West title. And a halftime lead would give the Wildcats a huge momentum boost for the final 30 minutes. So they went for it on first-and-10.

Graduate quarterback Peyton Ramsey took the snap from the shotgun and stayed cool in the pocket for three seconds before firing a high-arching shot to the front right corner of the endzone.

As the ball traveled through the air, senior wide receiver Ramaud Chiaokhiao-Bowman streaked towards it. He turned his head and locked in on the pass while facing tight coverage from Badgers cornerback Donte Burton. With outstretched arms, he reeled in the touchdown, tapping both feet on the Ryan Field turf before falling out of bounds.

The score from Chiaokhiao-Bowman — who finished with 4 catches for a career-high 95 yards after setting his previous career-high in yardage the week before — sparked a 17-7 NU win, a victory crucial to the Cats clinching their second Big Ten West championship in three seasons. Chiaokhiao-Bowman’s performance nearly three weeks ago also marked the continuation of the best year of his career.

After catching less than 500 combined yards and zero touchdowns in 2018 and 2019, Chiaokhiao-Bowman is NU’s leading receiver with 344 yards and four touchdowns through six games. Three of his scores came in the Cats’ win over Purdue in West Lafayette on Nov. 14.

From his coaches in high school and college to his current teammates, those close to Chiaokhiao-Bowman have been expecting his breakout season for quite some time. Now it is finally here.

“He is getting what he deserves, but I am not surprised,” senior wide receiver Kyric McGowan said. “He’s always been ready, just preparing for that moment when his name is called.”

Marcus Harris knows a good receiver when he sees one.

Harris won the Biletnikoff Award — given to the top wide receiver in college football — in 1996 as a senior at Wyoming. He currently ranks fifth all-time in career receiving yards in Football Bowl Subdivision history with 4,518.

The first time he met Chiaokhiao-Bowman was during summer workouts in 2012. Chiaokhiao-Bowman was a rising freshman. The offensive coordinator at the Breck School — located roughly 15 minutes from downtown Minneapolis — remembers the 5-foot-11 ninth grader making an immediate impression on teammates.

“He didn’t know any of the kids, but he didn’t let that turn him down,” Harris said. “He spoke up, he told kids how we should be doing things. So I could see his natural leadership.”

According to Harris, who was also Breck’s wide receivers coach at the time, Chiaokhiao-Bowman was always willing to stay after practice to continue working.

The extra effort paid off, as Chiaokhiao-Bowman grabbed 79 catches for 1,122 yards and four touchdowns in his first two seasons at Breck. He also racked up 107 tackles at linebacker, cornerback and safety and spent time as a return specialist.

By his junior season, he was named a captain, a testament to his leadership and belief in “the team, not the me” concept, according to Harris.

“He’s not intimidated by people getting better around him,” Harris said. “I think a lot of guys don’t want people around them better because it means ‘Dang, now I might lose my spot.’ But he’s so confident in what he does and he’s gonna work with everyone around him to make the team better.”

Chiaokhiao-Bowman’s third season at Breck saw him rack up 474 receiving yards, find the end zone ten times and score the first rushing touchdown of his career. Additionally, he led the team to its first above-.500 record in three seasons.

As Harris watched Chiaokhiao-Bowman develop, he quickly realized that his pupil could take his talents to college football.

“Working with him and seeing his competitive nature, I knew he’d have an opportunity to play at the next level,” Harris said. “He’s just a step above everyone we played.”

With letters rolling in from Ivy League schools to Harris’ alma mater to Minnesota — whose stadium is eight miles from Breck — the coach reminded the three-star recruit to let the recruiting process “come to you.”

Before the start of his senior year, Chiaokhiao-Bowman participated in a high-school camp in Evanston and received an offer from NU after impressing coaches.

Chiaokhiao-Bowman eventually chose the Cats, whose academic rigor played a key part in the decision.

“To know Ramaud is to know a guy who chases that mountain, who wants to be challenged, who wants people to know that I’m not a fluke,” Harris said. “While any college is awesome to get to, that Northwestern deal is a challenge that I think he wanted to have.”

Chiaokhiao-Bowman then proceeded to have the best season of his Breck career. A captain for a second consecutive season, he caught a career-high 721 yards and six touchdowns, including a 212-yard, three touchdown performance against St. Paul Como Park. He also notched three combined defensive and special teams touchdowns during the 2015 campaign — a pick-six, a fumble recovery and an 83-yard punt return.

He left Breck as the school’s career receptions leader with 162.

Arriving in Evanston as one of the Gopher State’s top recruits, Chiaokhiao-Bowman had a quiet start to his NU career.

He redshirted, then caught only four passes for 35 yards in his freshman year — including his first career touchdown in a 33-24 loss to Wisconsin on Sept. 30, 2017.

The catch would be the last time he hit paydirt for 160 weeks.

Chiaokhiao-Bowman would improve during the Cats’ 2018 run to the West title, catching 20 passes for an average of nearly 12 yards per grab. He also made the best play of his young NU career.

In the third quarter of the Holiday Bowl against Utah, Chiaokhiao-Bowman snagged a Clayton Thorson pass in midair, sprinted laterally across the entire field and rumbled for 52 yards to set up the Cats’ first touchdown of the game.

On the sideline, Thorson found Chiaokhiao-Bowman and screamed “I told you! I told you!” before bumping helmets with his young wideout.

The catch-and-run showcased his football artistry on the field. But his talents extended beyond the gridiron.

After NU’s 31-20 victory in the Holiday Bowl, music blasted in the locker room of SDCCU Stadium as pumped-up Cats surrounded Chiaokhiao-Bowman. Circled by his teammates, the redshirt sophomore started to dance. With each second that passed, the more impressive his moves became, causing a rousing chorus of “ohs” and “ahs.”

When Chiaokhiao-Bowman starts dancing, it means it is time to celebrate a win. His infectious energy permeates through the locker room and sometimes causes teammates to break out their own moves, as seen after the 2017 Music City Bowl.

“As a younger player in the program, I was being myself,” Chiaokhiao-Bowman told Big Ten Network. “Dancing. High-energy guy. If I have high juice, high energy, then I can affect those around me and that’s powerful.”

The locker room is also where Chiaokhiao-Bowman operates his “barber shop”. In the fall of 2018, he opened its doors as a place for teammates to bond and get a really good haircut. In fact, coach Pat Fitzgerald told Big Ten Network that Chiaokhiao-Bowman “is maybe the best barber in the Big Ten.”

But while he built strong connections off the field, he and the Cats’ quarterbacks lacked a spark on the field during his junior season. NU’s passing offense was one of the worst in the country in 2019 and it showed in Chiaokhiao-Bowman’s numbers. Across 12 games, he only caught 17 passes for 188 yards.

So after the Cats’ 3-9 season, the wideout went to work. Chiaokhiao-Bowman spent a lot of time in the film room, paying close attention to how he was winning and losing one-on-one battles. He then applied his findings to the field, spending each practice improving a specific aspect of his game.

“You want to talk about a guy who’s been relentless in his work ethic?” Fitzgerald said. “That’s what older leaders do.”

On Mar. 9, 2020, Ramsey committed to play in Evanston as a graduate transfer.

Shortly after he officially announced his decision, Ramsey was contacted by Chiaokhiao-Bowman to meet up and throw. The two continued to stay in constant contact throughout the offseason and gathered with senior wide receiver Riley Lees in May to test drive new coordinator Mike Bajakian’s offense.

Their chemistry quickly translated to the gridiron. Chiaokhiao-Bowman tied his career-high of four catches in the Cats’ season-opening win against Maryland and led all NU receivers with 11 grabs for 112 yards after three games.

A week later in West Lafayette, the wideout went to a whole new level as he and Ramsey worked together in perfect symbiosis against the Boilermakers.

Chiaokhiao-Bowman reeled in eight catches for 86 yards and three touchdowns, breaking all of his personal records by the end of the third quarter. From his first score on a slant route to his final catch of the night — a crucial fourth-down conversion — he helped the Cats achieve their first 4-0 conference record since 1996.

“This season is one that I’m trying to make the most memories on the field,” Chiaokhiao-Bowman said. “Just have no regrets and making sure I’m executing to the best of my ability.”

Chiaokhiao-Bowman also serves as one of NU’s most seasoned leaders. He has been a captain for three of the Cats’ games and a mentor to younger receivers such as sophomore Malik Washington and redshirt freshman Bryce Kirtz, as well as McGowan, his roommate.

“Every day I learn a lesson from him,” McGowan said. “We always debrief when we’re having dinner about how things are going and what we need to work on. That’s something that I will definitely take along with me down the road.”

This weekend, No. 14 NU will seek its sixth-straight win in the Land of Lincoln rivalry as Illinois comes to Ryan Field.

Even though the Cats have already clinched a date in the Big Ten Championship game with No. 4 Ohio State, Chiaokhiao-Bowman knows the importance of defeating their in-state foe. It is not just about bragging rights and higher seeding.

It is also not about what could potentially be the Minnesota native’s final regular-season game in an NU uniform. Chiaokhiao-Bowman has not decided on whether he will use the extra year of eligibility provided to all fall athletes by the NCAA.

For Chiaokhiao-Bowman, it is about helping the purple-and-white make history in a year when, for a time, there was no guarantee of a football season.