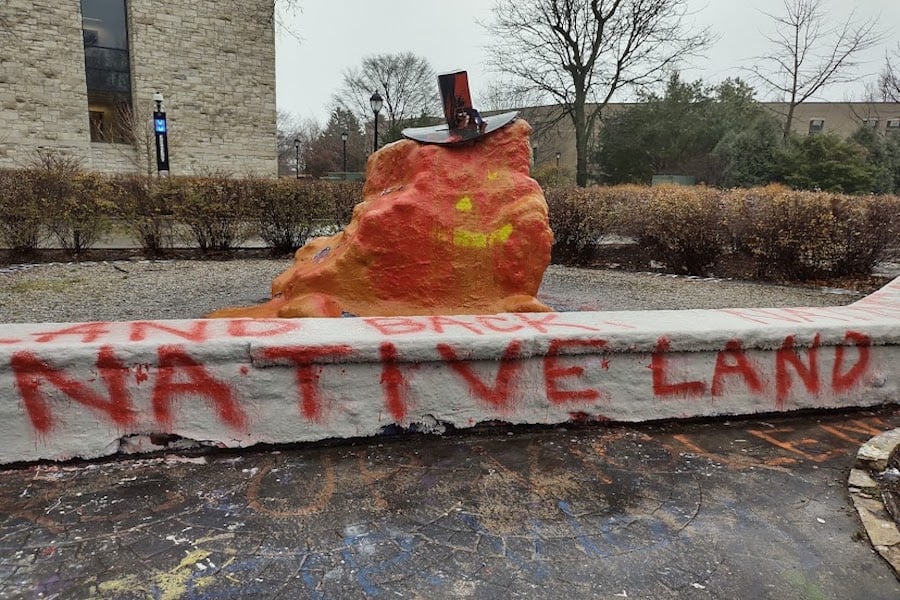 The Rock. After it was given a Pilgrim hat in the days leading up to Thanksgiving, Indigenous graduate students responded by repainting it with phrases such as “Native land” and “land back.”

The Rock, previously painted orange with a yellow smiley face since late October, had a new addition last week — a Pilgrim hat.

It was a few days before Thanksgiving, a day many Indigenous people call “Thankstaking” because of the way the day represents harm done to Indigenous people. Nikki McDaid-Morgan, a Ph.D. candidate from the Shoshone-Bannock Nation, said the Pilgrim Rock “wasn’t acceptable,” leading her and other Indigenous graduate students to take action.

“We were deeply disappointed, but not surprised. Really, Northwestern does a terrible job educating their students about Indigenous peoples,” McDaid-Morgan said in an email. “It wasn’t a surprise to see students upholding the Pilgrim mythology around Thanksgiving, or what we Native folk might call Thankstaking.”

The Rock painted as a Pilgrim, McDaid-Morgan said, showed that some are upholding a pro-Pilgrim narrative that harms Indigenous people and obscures the real history behind Thanksgiving.

McDaid-Morgan, a parent of two young children who are also from the Shoshone-Bannock Nation, said they were “deeply upset” by the Pilgrim Rock. She had them in mind when she went with a group to repaint it with calls for Indigenous sovereignty.

“The children needed to see that we can and will remind settlers that this land is Native land and that Indigenous people are still here,” McDaid-Morgan said.

On the morning of Thanksgiving, which many Indigenous people observe as the National Day of Mourning, McDaid-Morgan and others found their messages had been painted over.

Syd González, a Ph.D. candidate who painted The Rock with McDaid-Morgan, said the incident was the “epitome of Indigenous erasure.”

“It is anti-Indigenous and it is an attempt to whitewash the true history rather than deal with the discomfort of what this holiday actually celebrates: the genocide of Indigenous peoples and the continued theft and mistreatment of our lands and waters,” González said.

Northwestern Graduate Workers put out a statement calling the incident “hostile” and “heartless,” noting that it occured on the National Day of Mourning and during National Native American Heritage Month.

“These messages pose a threat to Native graduate workers, students, faculty, and staff at Northwestern and are thus intolerable to us as an antiracist and feminist labor union that supports Indigenous soverignty and resurgence, including the central demand of ‘land back,’” the statement read.

The statement calls attention to the involvement of John Evans, the University’s founder, in the Sand Creek Massacre, where 150 Cheyenne and Arapaho people, mostly women and children, were killed. It also encourages the NU community to learn more about the struggles of Indigenous people and donate to organizations that support them.

Benavidez said she hopes people who passed by the messages on The Rock considered “who this land belongs to” and remembered that the “original sin” of the nation, the genocide of Black and Indigenous people, still needs to be reckoned with.

“We hope this is a learning opportunity for the people responsible for covering our work and for the broader Northwestern community to recognize the land this University is on and the people it belongs to,” Benavidez said.