Football: How Northwestern returned to the top of the Big Ten West in 2020 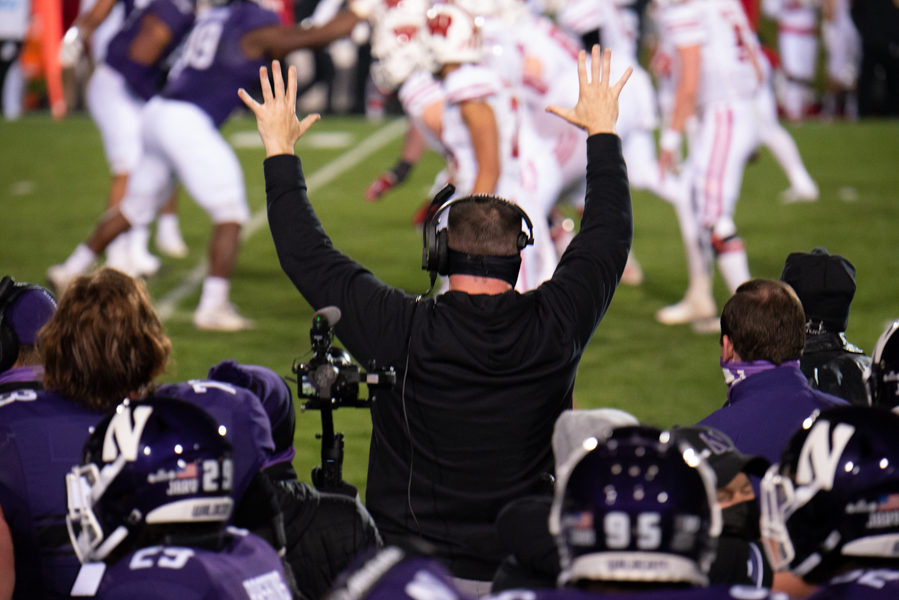 After the conclusion of the most disappointing season in his career, Pat Fitzgerald stood in a small sideroom near the visitor’s locker room at Memorial Stadium in Champaign on Nov. 30, 2019 with notes of excitement in his voice.

Northwestern had beaten Illinois to retain the Hat. But the weeks before had taken their toll. As the Wildcats trudged through a season of failure, Pat Fitzgerald’s hair grew slightly grayer, and his tone grew more blunt.

It was still the same Fitz, but it’s tough to crack jokes about Chris Farley in “Tommy Boy” when your team hasn’t won a conference game until the final week. So as the jokes stopped, different expressions filled their place: declarations.

For the last few weeks of November, Fitzgerald left a resounding message: 2019 was a fluke, and 2020 will be very different. And he didn’t just declare it. He broke down how it was going to happen.

He was right. NU will be back in the Big Ten Championship Game in two weeks after officially winning the West Division on Saturday, just like he predicted. And the things that he said would be different have been the main reasons for the team’s success.

So when Fitzgerald answered questions after the win over the Fighting Illini, he wasn’t just highlighting his pride at the victory, but tripling-down on his belief in the program.

If there were two overarching themes to both the 2019 and the 2020 seasons, it would have been quarterback play and turnovers. In 2019, Fitzgerald spent almost every week lamenting the struggles of the passing attack and his defense’s inability to force turnovers — and rightly so.

Under center, Northwestern’s quarterbacks last fall combined to lead one of the worst passing offenses in the country. The group averaged 117 passing yards per game, 126th in the FBS, and a 50 percent completion percentage, 128th in the nation.

“That is the number one room that I will get fixed,” Fitzgerald said on Nov. 18, 2019. “Period. End the discussion. Not hard, not complicated, it’s painfully obvious.”

With the hiring of Mike Bajakian as offensive coordinator and quarterbacks coach and signing of graduate transfer Peyton Ramsey, Fitzgerald remained true to his word.

Ramsey has stabilized the position, throwing for 1,136 yards and eight touchdowns. He hasn’t been a gunslinger in the mold of NU quarterbacks from around a decade ago, but the Cincinnati native has done a great job of putting together a solid offense.

And Bajakian has rejuvenated an offense that spent most of last season trudging along like a truck with a flat tire. It’s not a juggernaut, but his mix of pace, creative play-calling and more unpredictable style has made the Cats offense much better.

While the offense’s turnaround has been in the headlines, the turnover ratio is arguably the more important development.

The Cats couldn’t force any takeaways in 2019 — having the 12th-worst ratio in the country. The team only had seven interceptions and seven fumble recoveries all season. In half as many games in 2020, NU’s has forced so many turnovers that the team created a moniker for its players that have nabbed an interception.

“We’ve been one of the best turnover ratio teams in the country in my times that we’ve had successful teams,” Fitzgerald said on Nov. 4, 2019. “When we haven’t, we’ve gotten our fannies whipped…It’s not hard. It’s not hard. Take care of the ball and take it away, you got a pretty good chance to win games.”

The Cats have 12 interceptions in 2020, which was the sixth-best in the country before Saturday’s slate of games. The team has also forced six fumbles. As a result, NU has a plus-five turnover margin and has won the turnover battle in each of its five wins this year.

Of the 22 Opening Day starters in 2019, nine missed at least a quarter of the season with injuries. Every position group except linebacker had at least one major contributor miss time with an injury, with multiple groups seeing multiple guys suffer season-ending injuries.

“We’ve got a two-deep standing on the sidelines next to me in street clothes but that’s the next group’s opportunity,” Fitzgerald said on Nov. 23, 2019. “We will be back, because we’re going to get those guys back.”

It wasn’t just NU got guys like Greg Newsome II and Gunnar Vogel back and fairly healthy in 2020, but the guys who replaced them also got significant playing time that accelerated their growth.

The biggest example of this comes on the defensive line. After Earnest Brown IV and Samdup Miller were ruled out for the season, then-freshman Adetomiwa Adebawore and then-redshirt freshman Eku Leota found themselves in the regular D-line rotation. One year later, the two and Brown form one of the best pass rush groups in the conference.

Almost everything Fitzgerald said throughout the last few weeks of the 2019 season about on-the-field flaws were fairly obvious — “it’s not rocket science,” he said, more than once — but anybody can recognize the issues with an underperforming 3-9 football team.

It’s different to correct them and then execute the changes. That takes time and effort, mostly when no one is watching. And that’s what Fitzgerald got the entire program to do this year: buy into that process in practice and offseason workouts to get better.

“Off the field and as a program, everything is rocking as great as we’ve ever had it,” Fitzgerald said on Nov. 4, 2019. “Right now, just the on-the-field production, consistency and winning is not where it needs to be, and those are things that we are going to fix. And we will be back there.”

NU’s preparation for the 2019 season was not at the level it should have been at, and the players didn’t hold each other to the highest standard, according to Fitzgerald. That changed early in the 2020 offseason, and only improved as the pandemic hit.

The Cats have yet to have a positive COVID test since daily antigen testing began in September. While NU has had some advantages that other programs do not — most notably, the fact most first years and sophomores are not living on campus — the lack of a positive test illustrates the buy-in of this team heading into and throughout the season.

There is a lot more to the Cats’ 2020 Big Ten West title then forcing more turnovers, getting improved quarterback play, preparing better and getting healthy. But the story of this turnaround cannot be told without the context of the dismal 2019 season. After the highs of the 2018 season, 2019 had the chance to ruin all the momentum the program had accumulated.

It didn’t. NU recalibrated and went from worst to first in just about a year’s time. And, for four weeks in November 2019, Fitzgerald was trying to tell anyone who would listen to be ready for it.

“When you don’t have success, it drives you absolutely crazy and you look for solutions. You stay positive and you try to fix the things that you can fix. Like I said earlier, some can be fixed and then some, you got to just move forward. We’ll get those things improved,” Fitzgerald said on Nov. 25, 2019. “We’ll see you at the Big Ten Championship next year.”