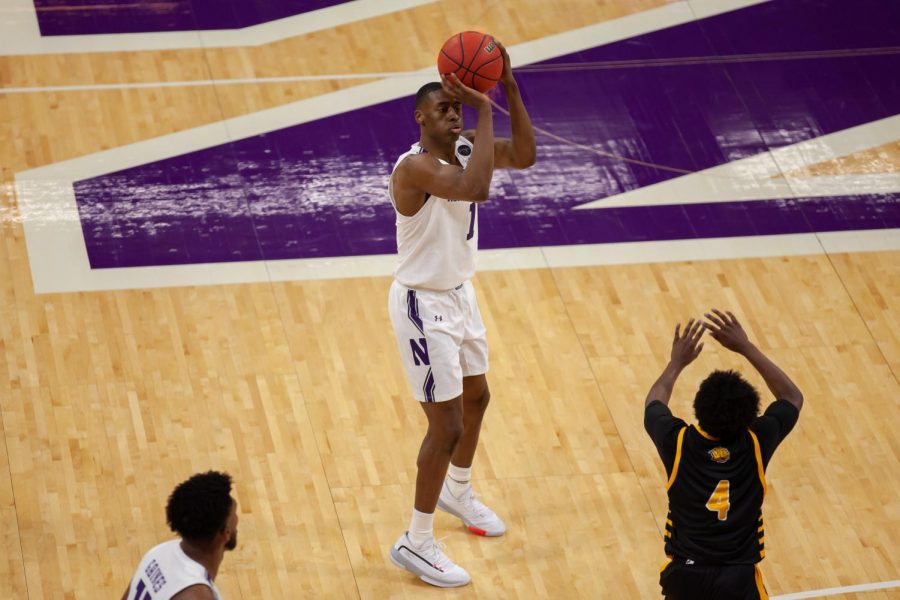 Northwestern began last season with a 71-61 loss to Merrimack. This season, with an older and more experienced roster, they made sure not to make the same mistake.

In their opening victory against Arkansas-Pine Bluff, the Wildcats started slowly, but soon picked up steam offensively, hitting nine consecutive shots and opening up a 10-point lead going into the second half. NU (1-0) went on a 20-2 run in the middle of the second half and never let its foot off the gas, speeding to a 92-49 victory over the Golden Lions (0-4).

“I felt we were a little rushed early,” coach Chris Collins said. “We took a couple quick, bad shots. I give these guys a lot of freedom. I’m going to let them shoot when they’re open because I think they can make it, but I thought we took some bad ones. Then we settled down… (junior forward Miller Kopp) got us going and I thought it let the air out of the balloon.”

Kopp was the Cats’ most consistent shooter last season, Collins said, and he delivered Wednesday with 18 points, including 4-of-7 from beyond the arc. But it wasn’t just Kopp — every player on the roster, aside from Young and freshman center Matthew Nicholson, who played just five minutes, hit a three.

“Other than Miller, we didn’t have a consistent three point shooter last year,” Collins said. “Pete (and) Robbie, they were streaky as freshmen and sophomores. Those guys have improved as shooters as our bigs. We are going to shoot a lot of threes, we’re going to open the floor. We’re going to try to utilize what our strengths are, and I think one of our strengths is shooting.”

Audige showed a lot of athleticism in his NU debut: the sophomore transfer’s offensive versatility made him a shooting threat from three, down low and in transition, and he took advantage of his opportunities. He was also a force on the glass, coming away with five rebounds.

The transfer from William & Mary sat out last season, but Collins said he was consistently one of the best players in practice, and one of the team’s strongest shooters.

“When Collins recruited me here, he told me to just be myself,” Audige said. “I’ve been to different programs and I feel like this is the first time where I could just be myself. My role is to do whatever is needed: rebound, defense, score, pass. I can be that Swiss Army Knife.”

Defensively, sophomore forward Robbie Beran shined in his defensive effort against Arkansas Pine-Bluff’s highest scorer, Shaun Doss Jr., who averages 19.3 points on the season but scored only 10 tonight on 3-for-14 shooting.

The one weak spot in NU’s performance: free throw shooting. The Cats shot just 61 percent from the line in the game. In a conference with as much overall talent as the Big Ten, NU will need to improve its foul shooting to stay competitive down the stretch.

In a season with so much uncertainty, Kopp said he was happy just to be out on the court playing another team.

“It was a relief off my shoulders, and I think the team’s shoulders, having the opportunity again to play somebody else,” Kopp said. “This is the game we love and, and we’ve all worked so hard throughout the summer just to have this opportunity. To see all the hard work that helped make this game happen, just so we can throw the ball in the air, it was awesome.”