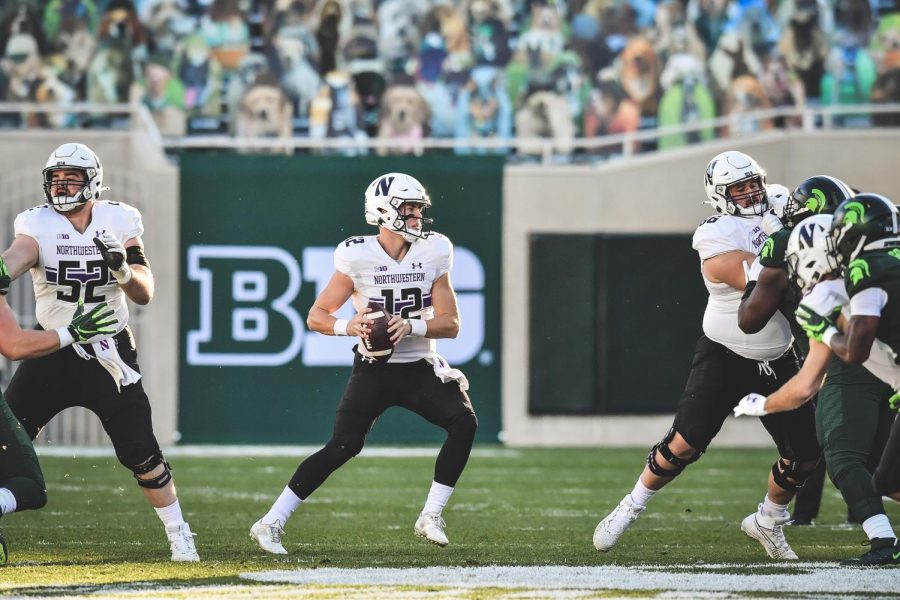 On Northwestern’s quest for its first Big Ten West Division title two years ago, Clayton Thorson provided the steady quarterback play needed to knock off then-No. 20 Michigan State in East Lansing. He threw for 373 yards and three touchdowns as the Wildcats won 29-19.

Thorson always found a way to play his best against the Spartans. In three games against Michigan State, he completed 70 percent of his passes for 1,010 yards, eight touchdowns and three interceptions. When Thorson played well against the Spartans, the offense followed suit.

With a chance to clinch their second Big Ten West title in three years Saturday, the Cats needed Peyton Ramsey to spearhead NU to a road victory.

It wasn’t Ramsey’s finest performance. Ramsey finished the game 21-for-43 with 210 yards and two interceptions as NU watched its College Football Playoff hopes slip away.

“We gotta make plays when we have the opportunity to make plays,” Ramsey said. “There were plenty of them out there. Plenty of plays to be made, especially on third down so just gotta be better. Just gotta execute better and that’s really what it comes down to.”

Ramsey’s first two starts against the Spartans as Indiana’s quarterback weren’t great either. He completed 68 percent of his passes for 430 yards, two touchdowns, two picks and two Hoosiers losses. Ramsey got off to a rough start against the Spartans.

Ramsey was inconsistent through the air in the first half, at times overthrowing receivers or making errant throws. He threw his first interception of the game on a fourth-down play in Michigan State territory — although the play could’ve been called back for pass interference.

The graduate transfer’s second interception came midway through the fourth quarter when Ramsey tried to force a pass to junior wideout Berkeley Holman, but got picked off by the Spartans’ Shakur Brown.

On the very next drive, he almost got picked off for a third time trying to throw the ball across field to senior Riley Lees.

But Ramsey did have bright spots in Saturday’s loss. The Cats’ best drive of the game wouldn’t have been possible without Ramsey.

NU came out of the locker room at half down 11 points and quickly made it four. Ramsey completed his first three passes and got everyone involved — a 16-yard strike to senior wideout Ramaud Chiaokhiao-Bowman, a 27-yard bomb to Lees and then a 12-yard pass to Chiaokhiao-Bowman a few plays later.

Ramsey finished off the drive by calling his own number on fourth down and running a bootleg in for a touchdown.

NU’s struggles offensively on Saturday weren’t strictly an indictment of Ramsey either.

He was without one of his favorite targets, graduate transfer tight end John Raine, as well as starting right guard Ethan Wiederkehr. The running game averaged a dismal 1.7 yards per carry and Ramsey got sacked four times and was hit six more.

It also didn’t help that the Cats played from behind for the majority of the game, forcing NU’s offense to become more predictable. Ramsey said that allowed the Spartans to focus on rushing him more because they didn’t have to worry about the run later in the game.

The Cats will have to play cleaner moving forward and it starts with Ramsey, who had two of the team’s four turnovers Saturday.

“It comes all the way full circle, Ramsey said. “You gotta play better from start to finish and you don’t give defenses those kinda opportunities to get after you there in the fourth quarter.”