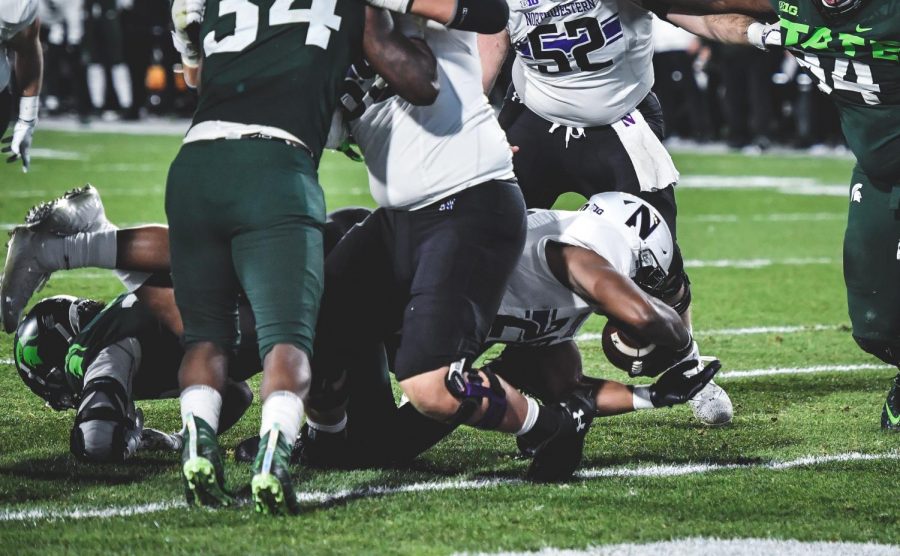 Cam Porter scores a touchdown. His was one of only two NU trips to the end zone against Michigan State.

Not many people expected a team that was outscored 73-7 in its last two games to upset the No. 8 team in the country.

But that is exactly what happened on Saturday night in East Lansing.

Despite scoring 14 straight points and holding the Spartans to 118 total yards in the second half, the Wildcats — who had the chance to clinch their second Big Ten West title in three seasons — themselves had two second-half turnovers of their own that killed their momentum. The team finished the game with four turnovers overall.

“We put ourselves into a hole,” coach Pat Fitzgerald said. “I think the lack of what you saw was maybe a little bit more being dictated by the outcome of some plays. I’ve got to coach our guys to be better than that.”

NU shot into the national conversation after defeating then-No. 10 Wisconsin and slotting eighth in the first CFP rankings of the 2020 season. The team’s win was a result of their defense forcing five turnovers.

But the script was flipped tonight at Spartan Stadium. The Cats were upset by a squad whose last win came on Halloween as a result of turning the ball over and not taking advantage of offensive opportunities.

NU’s first setback came on its first drive. On a fourth-and-one in the Michigan State red zone, junior running back Isaiah Bowser was stopped in the backfield. Two plays later, Spartans quarterback Rocky Lombardi connected with wide receiver Jalen Nailor for a 75-yard touchdown pass. It marked the first time all season the Cats gave up a play of 50 yards or longer.

“I thought at that point we had two good calls,” Fitzgerald said. “They didn’t work. It ended up leading to 10 points, which is disappointing. But I’m not going to be unaggressive. I’m going to be aggressive because I believe in our guys wholeheartedly and I believe they’re gonna make those plays.”

Despite the recent play from Eku Leota and Earnest Brown IV on the defensive line, the Spartans’ offensive line dominated the unit. A Michigan State rushing attack that averaged less than 74 rushing yards per game heading into Saturday’s matchup rushed for 195, courtesy of Lombardi and running backs Connor Heyward and Elijah Collins.

Lombardi, who gained 65 yards on 10 carries, wreaked havoc on a usually stout Cats defense with quarterback draws and outside runs.

“Going into the game and looking at previous games, we knew that teams have hit us on draws,” senior linebacker Paddy Fisher said. “We just got to do better with our keys and executing.”

Lombardi also rattled NU through the air. His 15-yard touchdown to wide receiver Jayden Reed to begin the second quarter was the second touchdown of the game with senior cornerback Cameron Ruiz in coverage.

By halftime, the lead was 17-6 in favor of the Spartans.

But the Cats turned the momentum back in their favor. NU scored the first two touchdowns of the second half to take a 20-17 lead early in the fourth quarter.

Moments after the second touchdown, the Cats got their biggest break of the day: Fisher intercepted Lombardi in Michigan State territory. Then, they made their biggest mistake.

McGowan fumbled an end-around on the ensuing play and the Spartans quickly turned it into three points.

Later in the fourth quarter, Ramsey threw another interception to Brown, allowing Michigan State to take a 23-20 lead with less than four minutes remaining.

“When you start trailing and you get into the fourth quarter, you become one-dimensional… It makes it a lot easier on those guys,” Ramsey said about the defensive lineman “When they know it’s gonna be passed and they don’t have to necessarily go through different reads and different responsibilities.”

Michigan State sealed the win when Lombardi ran eight yards for a first down with the Cats down to one timeout.

Even though the Cats got the ball in their own territory with seconds remaining, a miracle went unanswered, as a series of failed laterals resulted in Spartans cornerback Kalon Gervin recovering the ball in the end zone.

NU finished the game with four turnovers to Michigan State’s one. The Cats will return to Evanston defeated, but hope remains. The Cats can still clinch the West title with a win over either Minnesota or Illinois.