Football: Northwestern keeps its focus despite the hype surrounding its 5-0 start 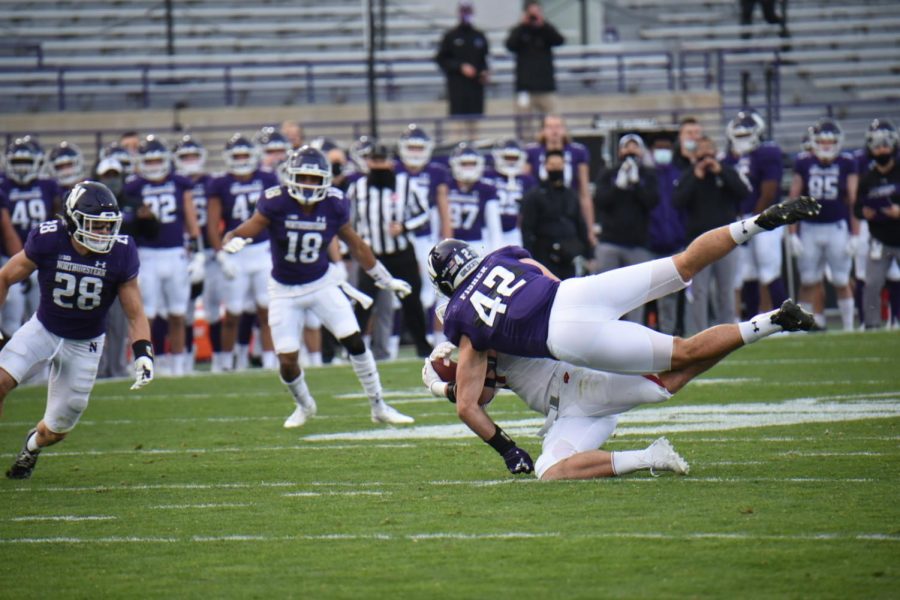 Paddy Fisher tackles a Wisconsin player. The senior tackle is second on the team with 46 tackles on the season.

Northwestern football fans sat in front of their televisions Tuesday night eagerly awaiting the first College Football Playoff rankings of the 2020 season to see where the Wildcats would fall.

As for senior linebacker Paddy Fisher?

Oh, well, he didn’t see the rankings live — he was cooking dinner. He only found out later through social media and his teammates.

According to a tweet from Yahoo’s Pete Thamel, coach Pat Fitzgerald wasn’t watching either.

NU came in at No. 8 on Tuesday’s unveiling of the rankings, after being ranked No. 11 and No. 13 in the AP and Coaches’ Poll respectively. Despite the respect that the team is starting to get nationally, Fisher said it was just another Tuesday night and a ranking doesn’t alter the mentality of the team.

Senior wideout Ramaud Chiaokhiao-Bowman said it’s hard to ignore the rankings — the reality is he and his teammates have TVs, smartphones and social media accounts. But he and true freshman left tackle Peter Skoronski said the team’s mindset is to worry about winning this week.

Fitzgerald has preached the same mantra throughout the season — to go undefeated every week. That has reverberated through the program so much that his players are now saying it.

“We see it, we acknowledge it and we keep it pushing,” Chiaokhiao-Bowman said. “If it would have said anything else it would have been the same process for us. It was a Tuesday night and Wednesday practice so we’re getting ready.”

On Twitter, Chiaokhiao-Bowman’s fellow wideout Riley Lees, junior cornerback Greg Newsome II and Fitzgerald tweeted that the rankings didn’t have any effect on their game plan and mentality moving forward.

Y’all can focus on that. We got work to do

Many players said that this pandemic has meant making sacrifices off the field for the safety of the team. Skoronski said he hasn’t been able to visit his family and friends often despite being 20 minutes away from home.

“The brotherhood here is tight and we want to do it for one another,” sophomore defensive end Eku Leota said. “Just being disciplined and not being out there being social and stuff has made it easier since we do it for each other.”

The 2020 season has created a lot of distractions in the college football community. But NU has found a way to focus and navigate all the challenges smoothly so far.

Now, the Cats are in the driver’s seat for the Big Ten West title. If they win the division, they would have a shot at a Big Ten title and possibly a College Football Playoff berth.

But, as Chaiokhaio-Bowman put it on Wednesday, you won’t hear a peep from any player until they reach their final destination.

“You’ll get even more response when it says No. 1,” Chiaokhiao-Bowman said. “When you see us in the CFP (College Football Playoff), though.”