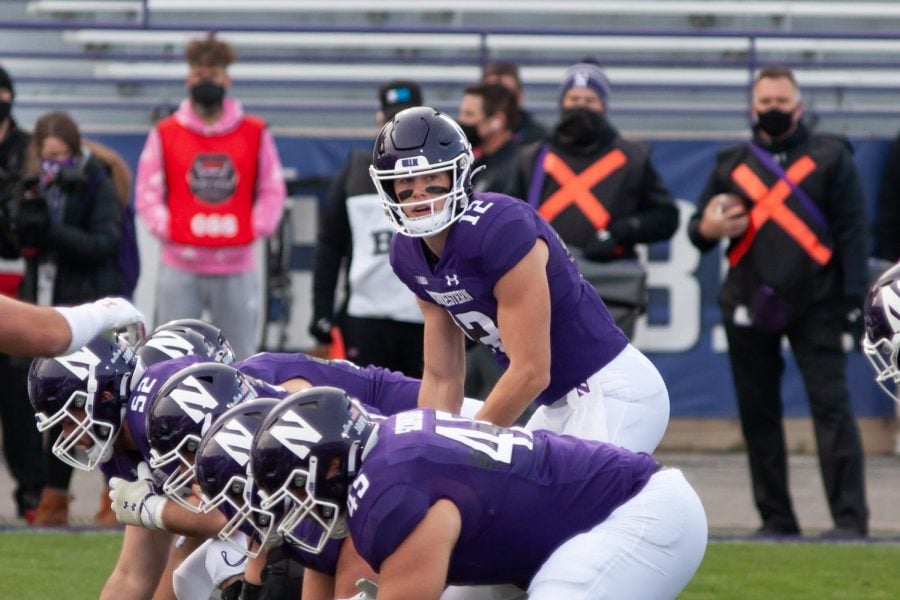 Peyton Ramsey prepares to take the snap. The graduate quarterback and No. 8 Northwestern can clinch the Big Ten West title with a win over Michigan State Saturday.

On Oct. 6, 2018, one-win Northwestern traveled to Spartan Stadium to face No. 20 Michigan State. The Spartans, three years removed from playing in the College Football Playoff, were favored by 10.5 points.

That afternoon, the Wildcats made a splash by upsetting Michigan State. Clayton Thorson threw for 373 yards and three touchdowns as the Cats continued their improbable run to the 2018 Big Ten Championship Game.

“We on the rise,” senior wide receiver Ramaud Chiaokhiao-Bowman said. “It’s no surprise for us. It’s exciting stuff.”

Defeating Michigan State would not only earn NU some hardware, but also some history: its first 6-0 start since 1962 and first 6-0 conference record since 1995.

The Cats are first in the West after defeating then-No. 10 Wisconsin 17-7 last Saturday. The win marked NU’s first 5-0 conference start since 1996 and put the squad a step closer to the Big Ten Championship game in Indianapolis.

The chance to clinch a spot in the conference title game comes after Saturday’s expected game between the Badgers and Minnesota was canceled due to a COVID-19 outbreak within the Golden Gophers’ program.

As a result, Wisconsin — who called off games against Nebraska and Purdue earlier this season due to a COVID-19 outbreak within its own program — is ineligible for the Big Ten Championship game because it will have played less than the league-mandated six games needed for championship eligibility.

NU is now heavily favored to win the Big Ten West because of its victory over the Badgers and its final three games coming against below-.500 teams.

However, coach Pat Fitzgerald knows that Michigan State — whose game last week against Maryland was cancelled due to COVID-19 problems in the Terrapins’ program — cannot be underestimated.

“They’re playing the way the Spartans have always played,” Fitzgerald said. “They’re incredibly talented. They’re not very far removed from being at the top of the Big Ten.”

The high of the Spartans’ season came on Halloween, when they upset Michigan at the Big House. Quarterback Rocky Lombardi threw for 323 yards and three touchdowns and wideout Ricky White set the Michigan State freshman receiving record with 196 yards.

However, the Cats are facing a very different Spartans team this Saturday. Michigan State has lost their past two games by a combined score of 73-7 and Lombardi was benched in a 24-0 shutout to Indiana two weeks ago.

Meanwhile, NU’s passing game is flourishing. Graduate quarterback Peyton Ramsey has thrown for more than 900 yards and eight touchdowns, while Chiaokhiao-Bowman is on a tear, reeling in 181 yards and four touchdowns in the Cats’ last two games.

But the running game has struggled. After gaining only 80 yards against the Boilermakers, the unit gained 24 yards on 23 carries against Wisconsin.

Fitzgerald said succeeding on the ground against the Spartans — who have allowed 3.9 yards per carry in 2020 — will be difficult. But freshman left tackle Peter Skoronski understands the importance of regaining the run game.

“It just comes with trust and the techniques,” Skoronski said. “We feel like we’re one block away and we feel like we have the holes that we need to make. Coach Jake’s got a great scheme and great run design, so I think we just got to trust that and trust our technique.”

Behind players such as senior linebacker Blake Gallagher — who was named the Bednarik Player of the Week and Nagurski National Player of the Week after a 14-tackle performance against Wisconsin — and redshirt freshman safety Brandon Joseph, the nation’s interceptions leader with five, NU’s defense is an undeniable force.