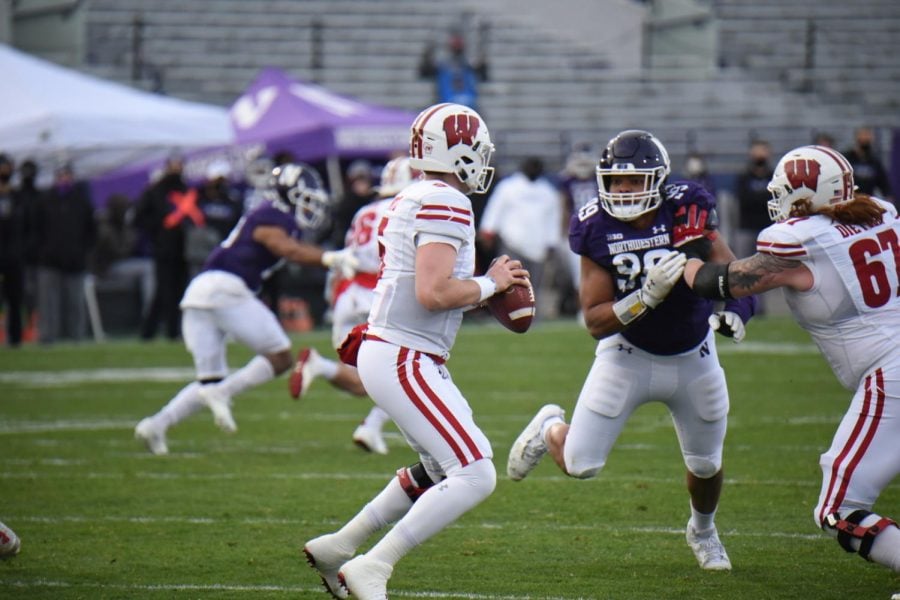 Earnest Brown IV rushes after the passer. The senior defensive lineman has 3.5 tackles for loss so far this season.

After Northwestern’s victory against Wisconsin Saturday, a 17-7 demolition in which the Wildcats forced a season-high 5 turnovers, senior defensive end Earnest Brown IV singled out one player on his front seven for setting the tone.

“I got two words for you. Eku. Leota. That man is a dog,” he said. “I gotta give credit where credit is due. Just trying to hype my boy up. If you don’t know him now, y’all should.”

Leota has lived up to his teammate’s praise. He has four sacks on the year, and in a Nov. 14 win against Purdue was the first NU player to register two sacks and a forced fumble in a game since Ifeadi Odenigbo did it in October 2016 against Michigan State.

He was even better at Ryan Field against the Badgers, swarming quarterback Graham Mertz and adding a sack in the game’s first quarter to end a promising Wisconsin drive and keep the Badgers at 7 points. He brought Mertz down again late in the fourth quarter, meeting the quarterback at the line of scrimmage and flattening him.

In a press conference Wednesday, Leota was asked about the improved play of the Cats’ front seven in recent weeks, and the increased pressure they’ve brought to opposing quarterbacks. He smiled, and then gave the credit back to his senior teammate.

“I got four words,” Leota said. “Earnest Brown the Fourth. He creates so much disruption that it makes our job as edge rushers a lot easier.”

Brown is in the middle of a comeback season — his last at NU. After missing much of the past year due to injuries, he’s started all five of the Cats’ games this time around and has already recorded 3.5 tackles for loss. He had four solo tackles and a pass breakup against Nebraska on Nov. 7.

Brown and Leota were praised by defensive coordinator Mike Hankwitz before the 2020 campaign started. Neither had started a game in their careers until this season, when spots opened up in the lineup as Samdup Miller opted out of the season in October.

Their prowess — and that of the front seven — was on display against Wisconsin. Brown recorded two tackles and a quarterback hurry. Senior linebacker Blake Gallagher and junior defensive end Cameron Ruiz each also came home with sacks.

“We knew what was coming. We played them last year,” Brown said. “We knew what kind of offense we were gonna run. How they trade their offense and stuff like that. We were prepared. We just punched them in the mouth and gave them what we got.”

That’s how the nation’s second-most efficient defense beat the team in first place. The Cats have the eighth-best rushing defense in the country and rank tenth in the FBS for total defense. They’ve allowed points in the second half just once all year.

“My personal goal is just to be a team player first and the numbers will come if you just do your job,” Leota said. “I don’t really look at numbers. I just look at hard work, dedication, blood, sweat and tears.”