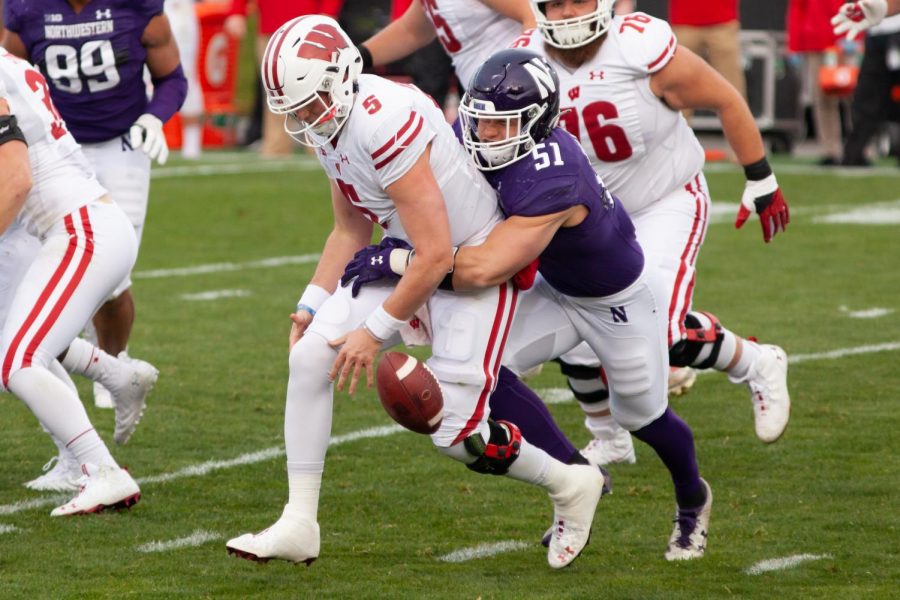 Saturday’s showdown was sure to be a tightly contested matchup and it lived up to the billing of a typical Northwestern-Wisconsin game. One team gave each other their best punch and the other team responded with a punch of its own.

Northwestern came out the gates like they had something to prove. Peyton Ramsey methodically drove the Wildcats down the field after the Wildcats’ defense forced a three-and-out. Six plays and four passes later, NU had an early seven-point lead.

The Cats had a chance to garner even more momentum in the first quarter after senior linebacker Paddy Fisher forced a fumble on Wisconsin’s ensuing drive. Offensive coordinator Mike Bajakian went to the creative part of his playbook and called for a trick pass from senior wide receiver Riley Lees to his fellow wideout Ramaud Chiaokhaio-Bowman.

The play was initially called a touchdown on the field, but the replay showed he stepped out at the one-yard line. With a chance to double the team’s lead, Isaiah Bowser mishandled the handoff, fumbled the ball and it was recovered by the Badgers. Graham Mertz wasted no time getting Wisconsin back in the game, leading a six-play drive capped off with a 49-yard bomb to knot the game at seven.

Both offenses stalled early in the second quarter, but the Badgers were able to find success on the ground. The Cats were giving up 91 yards rushing per game coming in, but gave up 104 yards in the first half on just under five yards per carry. NU, on the other hand, finished the half with 7 rushing yards. But a combination of bending, but not breaking and turnovers kept the score tied.

After Brandon Joseph’s second interception and the team’s fourth turnover of the first half, Ramsey and the Cats executed their two-minute drill and capped the drive off with a beautiful touchdown pass to Chaiokhaio-Bowman for the duo’s fourth touchdown in the past two games.

The second half was proof of just how good NU and Wisconsin’s defenses are. The first nine possessions of the second half ended in punts and the teams combined for 70 yards. Every possession of the third quarter for the Cats was a three-and-out.

NU’s first first-down of the second half came with 12:50 remaining in the fourth quarter on a defensive pass interference penalty against Wisconsin safety Eric Burrell. On that same drive, the Cats got two more first downs to move themselves into the red zone and extended their lead with a field goal from senior kicker Charlie Kuhbander.

The ensuing possession, junior cornerback Greg Newsome caught his first career interception and NU’s third of the game. Wisconsin had a few more chances to score late, but couldn’t muster any points against the stout Cats’ defense.

1. Northwestern’s running game still couldn’t get going. The Cats came into Saturday’s matchup ranked seventh in the Big Ten in rushing yards per game, but 11th in yards per carry with 3.6. Remove the blowout against Maryland, and NU has averaged just 2.7 yards per carry over its last three games. So if NU wanted to play the complete game it talked about all week, the Cats knew they had to get the running game going.

In the first quarter, Graham Mertz rushed for 24 yards on one play. That was more than double what NU ran for as a team in the whole first half. The Cats only attempted 11 rushes in the first half, but no matter who was next to or behind Ramsey, there weren’t many holes to run through and the team only rushed for seven rushing yards. Unfortunately for the Cats, the running game in the second half was more of the same. NU rushed for 22 yards on nine carries and the inability to run really hurt the Cats as they tried to milk the clock in the fourth quarter.

2. The Wildcats didn’t take full advantage of the defense’s turnovers, but did just enough. Northwestern’s defense created four turnovers in the first half — two forced fumbles by senior linebackers Paddy Fisher and Blake Gallagher and two interceptions by Brandon Joseph. But, despite the momentum and good field position at times, the offense only scored after one of the team’s four turnovers.

The Cats did almost score after the first turnover, getting the ball to the 1-yard line on what NU thought was a touchdown, but was ultimately called back. On the next play, Bowser fumbled the ball. Senior kicker Charlie Kuhbander missed a field goal after the Cats forced the second turnover. NU had a quick four-play drive on Joseph’s first interception before finally scoring right before halftime. That touchdown proved to be vital for NU, as neither team scored until Kuhbander made a field goal with 11:35 in the fourth quarter.

3. The Cats’ defense makes them a real threat in the Big Ten. With Saturday’s win, the Cats are now in the driver’s seat to a Big Ten West title and a shot at the Big Ten championship crown. They even have a shot at the College Football Playoff if they finish the season undefeated. This is due in part to the stellar play-calling of Mike Hankwitz and the players’ execution.

It wasn’t a perfect game for NU, and, in fact, none of the games have since the season opener. But in a game pitting two of the conference’s best defenses, the Cats were dominant in all phases of the game defensively. The defensive line had five quarterback hits and sophomore Eku Leota had the unit’s lone sack. NU’s trio of linebackers finished with 29 tackles and forced two fumbles. The secondary had three interceptions and only four Badgers’ wide receivers caught a pass. Saturday’s game proved this defensive unit might be one of the best in the country.