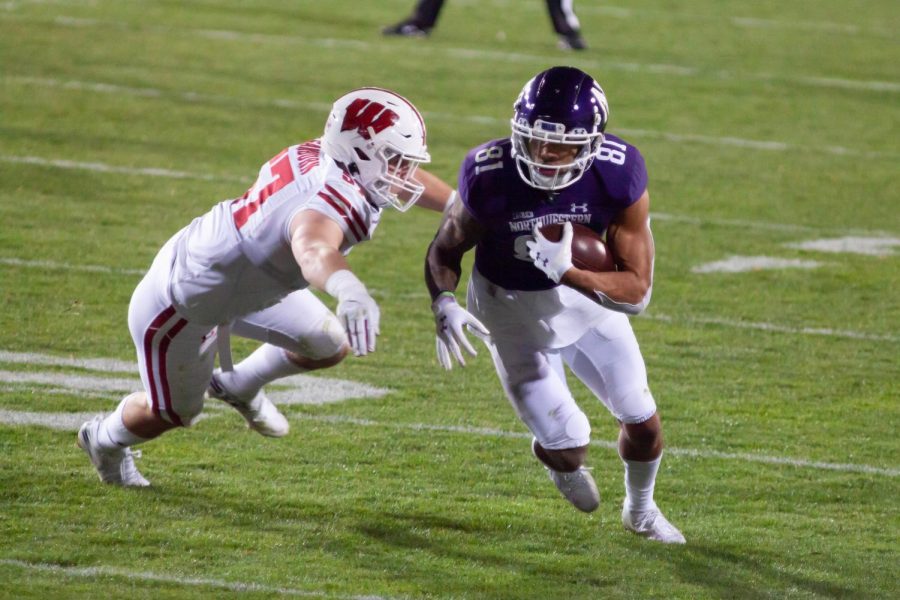 Ramaud Chiaokhiao-Bowman shimmies past Wisconsin linebacker Jack Sanborn. The senior wideout had a beautiful touchdown catch at the end of the second quarter.

With 56 seconds left in the second quarter, Ramaud Chiaokhiao-Bowman found himself in the corner of the end zone, watching a long 25-yard ball from Peyton Ramsey fall straight into his hands. The senior wide receiver might not have known in the moment that it would prove to be Northwestern’s biggest play of the game, but he sensed it was something special.

“I remember seeing the ball up in the air on the touchdown ball and just thought, ‘Wow, 12 is great. He just put this in the perfect spot,’” Chiaokhiao-Bowman said. “And the rest was history.”

Chiaokhiao-Bowman’s touchdown came just one minute and 19 seconds after redshirt freshman safety Brandon Joseph picked off an attempt from Badgers quarterback Graham Mertz. That throw, Ramsey’s longest in a Wildcat uniform, capped off a seven-play, 72-yard drive that gave NU (5-0, 5-0 Big Ten) a lead on No. 10 Wisconsin (2-1, 2-1 Big Ten) that it would not squander.

NU’s second-quarter drive broke what had been turning into a familiar script: In three previous instances, the Cats’ defense won a turnover on its end, but its offense followed up with nothing.

In the opening frame alone, the Wildcats had forced two fumbles, the first recovered by senior linebacker Blake Gallagher and the second by junior defensive tackle Trevor Kent.

After the Gallagher recovery, a trick play pass put NU on the one-yard line, well in position to stretch its one-score lead to 14-0 less than seven minutes in. But senior running back Isaiah Bowser fumbled, giving the ball back to Wisconsin and setting the Badgers up to tie the score. After Kent’s grab, NU made a push down the field, but senior kicker Charlie Kuhbander missed a 45-yard field goal attempt that would’ve put the lead back in its hands.

“(Forced turnovers) is a big correlation to victory, there’s no question,” coach Pat Fitzgerald said. “But you’ve got to score points off those turnover battles.”

The Cats got another opportunity three drives later, when redshirt freshman safety Brandon Joseph pulled in his fourth interception of the season, but nothing came of it. NU only held on to the ball for 92 seconds, and quickly went three-and-out.

When Joseph pulled in another interception on the ensuing drive, the Cats waited to see if the same progression would happen again.

The drive started with a pass to Drake Anderson for no gain, but Ramsey followed it up with six completions in a row to move the ball 70 yards down the field. Three of those passes came for 12, 14 and 16 yards successively to senior wide receiver Kyric McGowan before the final one came to Chiaokhiao-Bowman.

“That was a critical drive — absolutely critical,” Fitzgerald said. “I thought Peyton showed his experience tonight. He took what the defense gave him, and he didn’t force anything.”

That marked the fifth time this season that Ramsey has gone without a single miss on a drive with at least three pass attempts — and each has ended in a touchdown. This week’s 7-for-7 drive mirrored a second-quarter drive last week against Purdue, which also saw Ramsey throw a perfect 7-for-7 and ended in a touchdown pass to Chiaokhiao-Bowman.

The graduate quarterback understood that NU’s ground game wasn’t having any success — the Cats’ rushers managed only 24 yards on 23 carries against Wisconsin’s mammoth defensive line — and got more time and space in the pocket to throw from his offensive line.

It wouldn’t be the last time on Saturday that the offense made good on a chance offered up by its defense. Early in the fourth quarter, the Cats forced the Badgers to turn the ball over on downs just shy of the red zone, with junior cornerback Cam Ruiz flying in late and taking down Mertz for a 10-yard sack.

On the ensuing possession, Ramsey threw two long completions to Chiaokhiao-Bowman to bring NU all the way to the 14-yard line, setting up an opportunity for Charlie Kuhbander to convert a field goal from 32 yards and make it a two-score ballgame.

The Cats are still far from playing a “complete” and “perfect” game, Fitzgerald said afterwards, but the scoring off of turnovers — something NU had struggled to do at points throughout this season — marked a sign of definite progress and confidence among his now 5-0 team.

“We weren’t able to capitalize on all of them, and we have to be better from that standpoint for sure,” Ramsey said. “But when you have that kind of defense, you have so much confidence as a quarterback with the ball in your hands.”