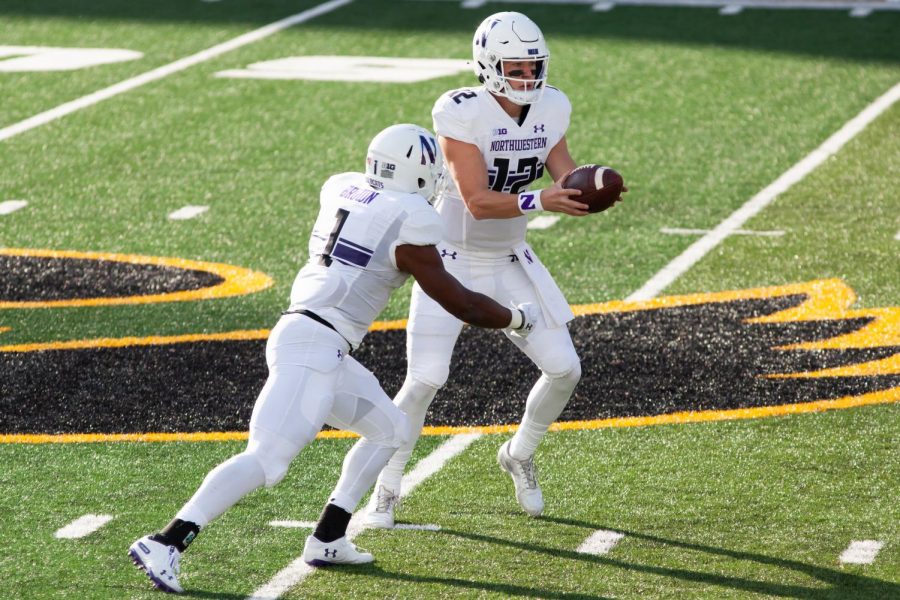 Peyton Ramsey hands the ball off to Jesse Brown. The Cats are hoping for a big offensive performance against Wisconsin on Saturday.

No. 19 Northwestern’s offense has proven to be a balanced unit that can help win a football game in different ways.

Against Maryland, NU’s passing game and running game were virtually unstoppable, with the offense totaling 537 yards. The Wildcats’ running game was on full display against Iowa and Nebraska when the team rushed for 143 and 148 yards respectively. Graduate quarterback Peyton Ramsey’s heroics saved the day against Purdue as he passed for 212 yards and three touchdowns.

NU’s balanced offense got the team halfway through the season unscathed. But if they want to keep it that way, coach Pat Fitzgerald knows the offense needs to put together a game reminiscent of its dominance against the Terrapins.

“We’ve run it well in a couple of games, we’ve thrown it now to win games,” Fitzgerald said. “We’ve just got to put together a complete game as an offense, which we were yet to do.”

Mike Bajakian’s offense attempting to find its groove against the Badgers won’t be an easy feat. The 10th-ranked Badgers are first in the FBS in defensive efficiency, yards per game and points per game — albeit only playing in two games.

Fitzgerald said Wisconsin’s speed and physicality, specifically on the front seven, jumped off the tapes from its wins against Illinois and Michigan. So Fitzgerald said the team has to be fundamentally sound on the offensive line, an aspect of the unit’s game that was lacking last week.

Senior offensive tackle Gunnar Vogel said there were a few plays last week where the line came extremely close to executing the play design to the fullest, but someone missed a block. He stressed that the line was working on improving on its mistakes for next week.

“In terms of offensive line, we gotta work on staying on these guys, getting to the second level (and) anticipating their movement,” Vogel said. “If we can pick those up in pass protection and then cover guys up in the run, we’re gonna have a lot of success.”

The offense currently ranks 12th in the Big Ten in total offense, 12th in passing offense and 7th in rushing yards. The Cats are still 11th in the conference in yards per rush, even though they are in the middle of the pack with yards per game.

If there is a silver lining to NU’s slow start, the 2018 Big Ten West title team ranked 12th in the conference in total offense for the season. But the Badgers offense has been explosive in its first two games, and the Cats will have to keep up.

Wisconsin ranks second in total offense and is first in the league in rushing yards per game. Graham Mertz, the Badgers’ redshirt freshman starting quarterback, has thrown for seven touchdown passes in his first two games.

Good teams find different ways to win, even if they don’t play their best game. But great teams find ways to play at their best when the lights are the brightest.

NU has the opportunity to distinguish itself this weekend.

“They’re a complete team,” Fitzgerald said. “They’ve played outstanding in all three phases in their first two games… We’ll have our hands full without a doubt, but excited for the challenge and looking forward to it here this Saturday.”