Football: Northwestern’s front seven look ahead for a matchup against Wisconsin 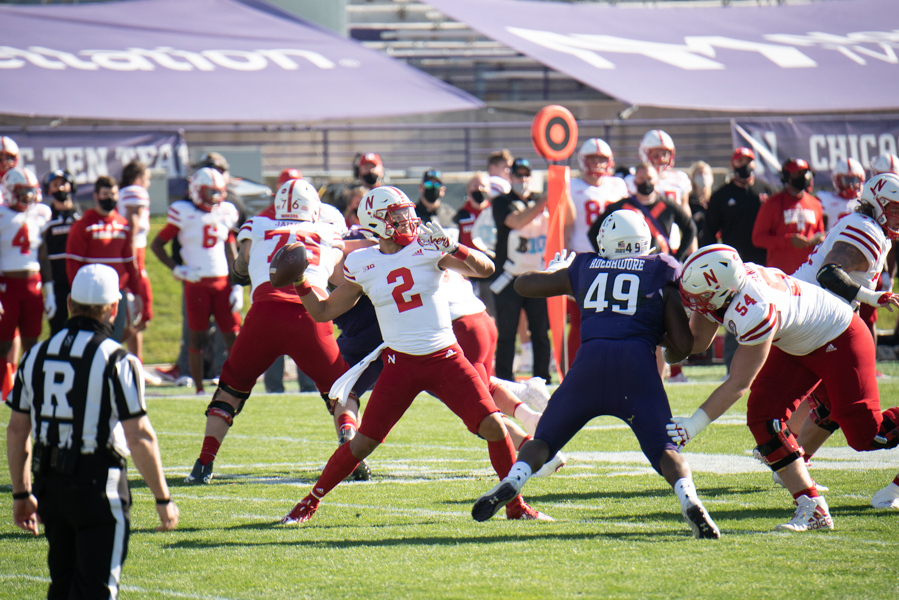 Adetomiwa Adebawore rushes the passer. The sophomore has had a great start to the 2020 season.

Adetomiwa Adebawore signaled he was ready for new heights in the third quarter of Northwestern’s season opener at Ryan Field. With the Wildcats up 37-3 against Maryland, Adebawore barreled through two Terrapin guards and grabbed at the feet of their hapless quarterback, Taulia Tagovailoa.

Tagovailoa fell, Adeboware got up and raised his right arm in adulation, barely celebrating as the defense made its way off the field.

Adeboware has quietly become a standout on the NU (4-0, 4-0 Big Ten) defensive line. Against Nebraska on Nov. 11, Adebawore came up big, registering his second sack of the season and bringing down a career high four tackles, including 1.5 tackles for loss.

The difference is NU has played two more games than Wisconsin, and they’ve stayed undefeated while facing the third strongest strength of schedule in the FBS.

“We’re all putting in work,” Adebawore said. “We’re all making sure we’re all getting better. Pushing each other in practice each and every day.”

Wisconsin coach Paul Chryst has seen the stats. He knows the favored Badgers cannot afford to take the Cats lightly. NU boasts a run defense which has beat up on Wisconsin in the past, holding two-time unanimous All-American running back Jonathan Taylor to a combined 126 yards on 30 carries in 2017 and 2018. The Cats have won five of the last six times they’ve played Wisconsin at Ryan Field.

The defense has been keyed by an imposing defensive front, led by Adebawore and senior Earnest Brown IV. Brown has been at Northwestern for four seasons, and has been a stabilizing force this season. He has already made nine tackles on the season, two of which came against Purdue.

They’re going up against a Wisconsin offense, which has torn through its opponents in its first two games. Led by redshirt freshman quarterback Graham Mertz, the Badgers put up 430 yards of offense in a 45-7 win over Illinois. They then put up 468 combined yards in a 49-11 demolition over flailing Michigan last week. They’re powered by a stout offensive line, for which NFL.com in July anointed Wisconsin as the definitive “Offensive Line U.”