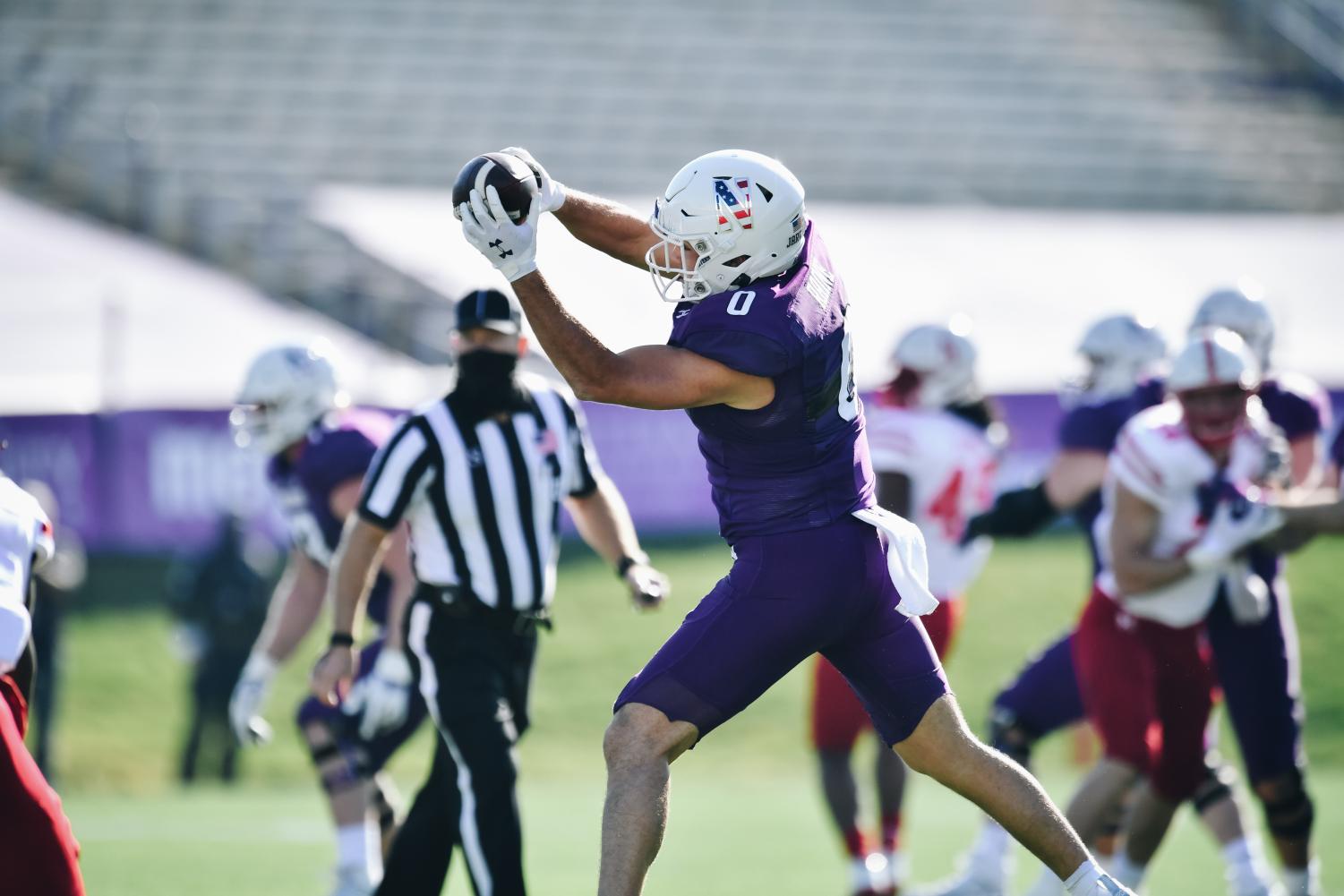 John Raine catches a pass against Nebraska. The graduate transfer has emerged as one of Northwestern’s top offensive players this 2020 season. (Photo courtesy of Northwestern Athletics)

John Raine catches a pass against Nebraska. The graduate transfer has emerged as one of Northwestern’s top offensive players this 2020 season.

Even Pat Fitzgerald will admit it: Northwestern tried to keep John Raine a secret.

Despite an impressive resume of two bowl wins and nearly 350 receiving yards in his senior season at Florida Atlantic, the tight end was relatively unknown to a Big Ten crowd until this April, when the whispers of a connection between him and the Wildcats first came about.

After four years with the Owls, Raine was looking to use his fifth year of eligibility somewhere new. But when he told 247Sports that NU was among his top four — alongside Florida State, USF and Arkansas — it came a bit out of left field.

Twelve days later, Raine announced his commitment to the Cats. He’d bypassed schools who had two of his former offensive coordinators at FAU and bought into what Fitzgerald and new play-caller Mike Bajakian were selling up in Evanston.

“We tried to keep John really quiet,” Fitzgerald said at a press conference earlier this season. “(I’ve) probably got to coach the guys up to be a little bit more coy, but John’s a really good player. A really, really good player.”

Six months since his commitment, Raine is quiet no more. Through the Cats’ first four games of the 2020 season, he’s debuted as one of fellow graduate transfer Peyton Ramsey’s favorite targets, pulling in 11 catches for 112 yards and one touchdown.

To those who coached him at the high school level and at FAU, Raine’s success since moving north has been no surprise.

“Everything he’s doing at Northwestern, we’ve seen every day, day in and day out, down here,” Owls offensive coordinator Clint Trickett said. “He’s everything you want in a player.”

Growing up, Raine’s first love was basketball. He made the varsity team as an eighth grader at Westminster Christian, a private school in the Miami suburb of Palmetto Bay that boasts Alex Rodriguez among its most famous athletic alumni.

Raine shined for the Warriors from eighth grade until his senior year, helping his team to three 20-win campaigns and back-to-back district titles. In his final season, he led Westminster Christian to its first state Final Four appearance in school history, earning All-Dade County, team Offensive MVP and Defensive Player of the Year honors.

But the city of Miami doesn’t traditionally send too many basketball players to big-time colleges. So Raine started to turn his attention more toward the gridiron, where he’d have more chances and opportunities to play in college.

“I think I loved the weight room a little too much,” he said. “I was starting to get a little too big, my jump shot started going away, and I fell in love with the game of football.”

He played both ways for the Warriors as a junior in 2014, averaging 11.7 yards per catch as a tight end and inside receiver, and tallying 58 tackles as a defensive end.

The athleticism Raine developed in basketball translated easily as he shifted his primary focus to football, said Sedrick Irvin, a former fourth-round NFL Draft pick who coached Westminster Christian from 2011 to 2016.

“He had the footwork to cover a point guard, and also the strength to cover a big man. He was also athletic enough to run the break,” Irvin told The Daily. “So when it came to football, he was able to use his athleticism to get open against linebackers, against safeties, and he had the hand-eye coordination where he didn’t drop many balls.”

Raine had the athleticism; he had the hand-eye coordination; and he had the size — 6 feet two inches, 230 pounds — to play tight end at the next level. But even more importantly, Irvin said, he had another hidden advantage off the field.

“You know what the key is? His mom makes some great curry chicken and oxtail,” Irvin said. “When you eat like that at home, it’s like a superpower.”

Raine’s family is Lebanese-Jamaican on his mother’s side, and her cooking was famous throughout her son’s time at Westminster Christian. Whenever Raine would visit his coach’s office, before any football topics could even come up, Irvin’s first question was always the same: “When’s your mom going to make her chicken? When’s she going to make her oxtail?”

If Irvin saw that as a secret weapon, then it worked. In his senior year in 2015, Raine pulled in 24 catches for 223 yards and four touchdowns. He was named the team’s Offensive Player of the Year and helped the Warriors go 8-2, finishing just short of a trip to the state final.

Raine was named Westminster Christian’s Male Athlete of the Year for his accomplishments on the court and the field. A three-star recruit who also fielded more than a dozen offers, he decided to take his talents one hour north of Miami to Boca Raton and FAU.

He saw action in only four games as a freshman, but earned more playing time when Lane Kiffin was hired to head up the Owls in 2017. The season was one of FAU’s best in school history — an 11-3 finish, a Conference USA title and a win in the hometown Boca Raton Bowl.

Kiffin brought on Trickett, then an assistant at East Mississippi C.C. of Last Chance U fame, to coach the tight ends in 2017. Under his tutelage, Raine pulled in six catches for 50 yards and saw time on special teams. He would continue to develop in 2018, grabbing 10 catches for 99 yards and recording his first career touchdown.

His breakout came as a senior: He tallied an impressive 38 receptions for 343 yards and six touchdowns. Raine led the Owls in catches against Ohio State and UCF, their two highest-profile opponents in 2019, and added seven catches in the team’s Boca Raton Bowl win over SMU.

“He’s always been able to run routes and get quick and athletic and catch the ball, but his blocking definitely improved,” Trickett said. “You’ve just got to tell him once and he’ll get it right.”

Raine’s daily practice preparation at FAU involved lining up with a future Mackey Awardwinner and NFL prospect — one who also happened to be his best friend.

Harrison Bryant played alongside Raine for all four of their years with the Owls, and the two developed a bond beyond the football field. A consensus All-American, Bryant led all tight ends in the country last season with 65 catches for more than 1,000 receiving yards, and now has 15 catches and three touchdowns for the Cleveland Browns in his rookie season.

The two still talk every day. As guys who spent the last four years in South Florida and now moved to the Midwest, the conversation often hits on the cold weather. They’re both starting new journeys at the same time — in a way that they might not have predicted in 2016.

“We’re best friends from our freshman year at FAU, and I can’t say enough about him as a person or a player,” Raine said about his fellow tight end. “And the way (Trickett) developed us, the relationship we had was special.”

As Bryant prepared for the Draft in April, Raine was also exploring his options for continuing his career outside of the Sunshine State. With schools in the Big Ten, SEC and ACC on his list, he was looking to make the jump to a higher level.

Trickett, who’d been promoted from tight ends coach to co-offensive coordinator after Kiffin left for Ole Miss and Willie Taggart took over, hoped Raine would stay in Boca Raton another year, but saw that he had the skill and drive to compete in the Power Five.

“I knew (with) John, the level of competition wasn’t going to be a problem,” Trickett said. “You can get a tag of being a Group of Five player, and need to ‘prove yourself’ at the ‘bigger school,’ but he’s doing exactly what he’s done here, it’s just against different people. It’s just as productive.”

When the chance with NU came up this spring, Raine was sold.

“The first thing I did the moment I knew I had an opportunity here at Northwestern was watch Boston College’s film from last year,” Raine said. “I knew Coach Jake was coming in, so I watched his film. I saw the way he utilized his tight ends. I saw how effective they were.”

And effective they have been in Bajakian’s new offense for the Cats. Through four games, Raine and junior Charlie Mangieri, NU’s backup tight end, have combined for 13 catches and 128 yards — almost double what the Cats’ superbacks had in all of 2019. His 10.18 yards per catch are the most averaged for a tight end or superback at NU since Garrett Dickerson’s 10.8 in 2017.

“He’s a matchup problem for linebackers and safeties, because he’s so athletic there in space. This is something we saw coming,” said Ramsey after Raine scored his first touchdown on Nov. 7. “We’re excited he’s on our team, cause he’s definitely a playmaker.”

Raine has adjusted to the speed and style of Big Ten play quickly enough on the field. Off the field, the differences between South Florida and Chicago are “night and day,” but the players and staff have welcomed him with open arms.

The only thing he has yet to fully master is the art of replicating his mom’s specialty cooking: After four years of her dropping off home-cooked meals to him in Boca Raton, he asked for some of her recipes, but upon seeing a list of “like, 100 things,” put his at-home cooking plans on hold for the time being.

Even without the curry chicken and oxtail in his back pocket, those who know him think he’ll continue to impress. Trickett compared him to former Harvard star Kyle Juszczyk, a converted tight end whose ability to catch the ball and block in the backfield earned him starting spots as fullback for Baltimore Ravens and the San Francisco 49ers.

Whatever comes next in Raine’s journey from the bright lights of Miami to the big stages of the Big Ten, his former coaches say, it shouldn’t come as a surprise.

“He could’ve been a Big Ten football player a long time ago,” said Irvin, himself an ex-Big Ten player at Michigan State. “He’s a mismatch all day, and I hope they realize that, and isolate him more and more. He has the drive and the determination to be great.”