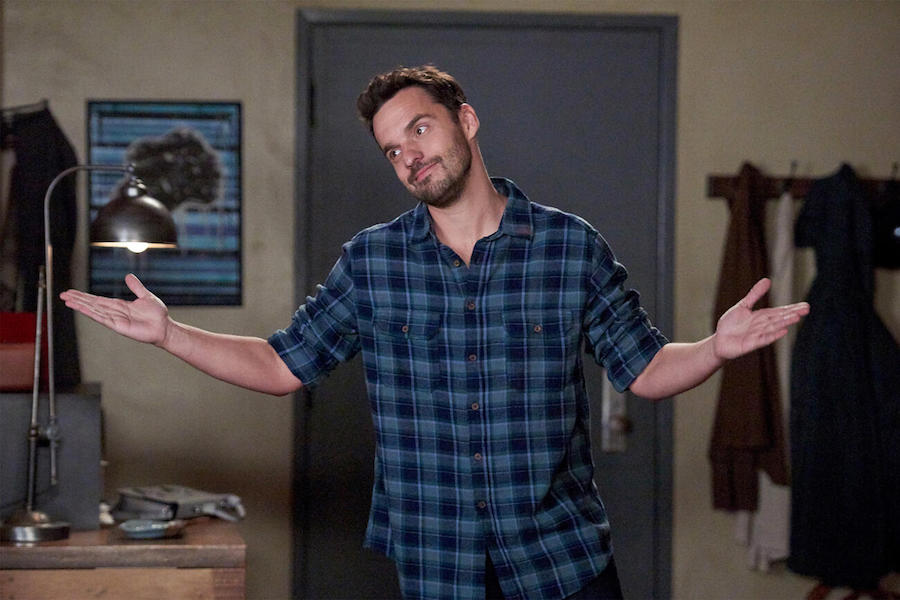 Jake Johnson in “New Girl.” The actor spoke to the Daily about growing up in Evanston and shooting a movie in the pandemic. (Fox Broadcasting Company)

Jake Johnson in “New Girl.” The actor spoke to the Daily about growing up in Evanston and shooting a movie in the pandemic.

Jake Johnson may have a career filled with iconic projects like “New Girl” and “Spider-Man: Into the Spider-Verse,” but the actor has humble roots in the town many Northwestern students now call home. As a teenager, he lived on the corner of Forest and Hinman Avenue, attended Evanston Township High School and dined at Buffalo Joe’s. The Daily sat down with Johnson to talk about growing up in Evanston, a potential collaboration with his “New Girl” castmates and the projects he has been working on during the pandemic.

The conversation has been edited for clarity and brevity.

The Daily: What was it like growing up in Evanston?

Johnson: I grew up in Winnetka but my mother and I moved to Evanston when I was 15. It had a great small city next to a big city feeling, and I loved being able to jump on the Howard Street (L stop) and go to great little bars and restaurants. My first comedy group, The Midwesterners, had a bunch of guys I grew up with and we used to meet on Main Street in Evanston, where we did the majority of our writing. We would go to the Hilton Orrington and sneak into their meeting room as our rehearsal space. We thought it was so cool to be in a big high rise hotel and walk in and pretend we had a room there.

The Daily: Where would you usually perform?

Johnson: This was early on in our careers, so it was the end of high school and early college. We did a show in The Second City and performed in the Improv Olympic (now known as the iO Theater) in Chicago. Any and everywhere we could in that era. When I was in high school, I did any kind of comedy I could and once I got into college, I did everything I could in and outside of the university. My advice to college students is always to try to enter the professional world while you’re still in school. You have Chicago right next to you.

The Daily: How did going to high school in Evanston add to your career?

Johnson: When I was coming up, Chicago was a real haven for comedic actors. And it felt like there was just a lot of great comedic talent that came out of Chicago — a lot of people I looked up to — from Tina Fey to Amy Poehler to Bill Murray to Tim Meadows. I always had a sense of confidence that I’d come out of that area too and I was part of that lineage. If anything, it was more a chip on my shoulder and something about Chicago and Evanston — it felt like a big small town. When I moved to New York, I always tried to keep that with me, that you could live in a big city and still talk to people in your neighborhood.

The Daily: What were your favorite places in Evanston, especially when you were in high school?

Johnson: Do you know the Greek restaurant, Cross-Rhodes? Right across the street from that, my mother had a junk shop and last I checked, they tore it down and built a bank or something but we used to have a shop right there. We used to go to Cross-Rhodes all the time, and right near there was a Salvation Army and that was the first place where I got cool hipster sweaters when I was 16, where I could walk into a place and for $20 get a whole bunch of cool shirts. There were also all these coffee shops, like Cafe Express, and back then we could smoke cigarettes inside and thought we were so cool doing it. We would wear beatnecks and sit with a journal and write poems and smoke cigarettes in a coffee shop. It was Buffalo Joe’s, Cafe Express, all the places. Dave’s Italian Kitchen used to have this really cool shop, the original place was so hip.

The Daily: How do you think growing up in Evanston shaped your portrayal of Nick in “New Girl,” because I feel like he has a decently similar background to you?

Johnson: The writer of the show, Liz Meriwether, was from Ann Arbor. She wanted Nick and Winston to be from Ann Arbor, but Lamorne Morris is from Chicago as well. So I asked her if we could set it in the Chicago area for these two characters, because if you’ve ever been in Ann Arbor, there’s a different vibe. On a show like “New Girl,” where we relied so heavily on our improv and instincts, I thought it would be a lot smoother to be from a place that I deeply understood and I think Lamorne felt the same way. For me, whenever I can add anything, like an old Chicago flag, I always try to put it in the background. I’m not sure why, but it feels fun to try to connect things to my hometown.

The Daily: Are there other things like that that you’ve done, in your movies? Just bringing other parts of yourself?

Johnson: If you look at Nick’s room, there’s a gorilla drawing on the wall that my wife drew for me years ago that I made a print of and put on the set. The JC Brooks & the Uptown Sound band — the leader, Bill Bungeroth, was a guy I grew up with who was in that comedy group I was telling you about, so I got their band’s poster on my character’s wall. The band Pass Kontrol, was also on the wall, and one of the band members, Oliver Ralli, did The Midwesterners with me. I always try to connect my people into the universe of the shows and movies I’m in, it makes it feel a lot more connected. It’s kind of like insider trading. A lot of actors don’t care about the set decoration behind them, but for me, it all means a lot. If I’m going to be in a scene a lot, and there’s something behind me, I would much rather the artwork on the wall be from an artist that I know and that I care about. Because in the end, it is all advertisement, millions of people see this stuff. I don’t do a deep dive on what bands my character Nick Miller would like because he’s a fictional character, so whatever I choose for Nick to like is what Nick’s gonna like. And I do that with all my characters, I don’t pretend that they’re real. So my opinion is their opinion.

The Daily: Your use of your own background in creating your characters definitely shines through in Nick’s love for the Cubs. Right?

Johnson: So here’s the truth on part of that and it’s very dorky, but it’s true. When “New Girl” started, it was the first thing I had done that got very popular, so a lot of people were paying attention to it. I started realizing if I mentioned something on television, the actual Cubs, or the actual Bears are hearing about this, so it became this really wild experience where I would be in a scene and if it was generically watching a sports game, I would just improvise something about the Cubs. When Zooey (Deschanel) had some lines about the Bears, Zooey asked me, “Which Bears do you want me to mention?” And I was like, well, mention the guys I think might watch it. So we mentioned Anthony Rizzo in a baseball thing because he and I had reached out to each other, he had told me that he had seen the show. So I was like, “Oh, this is becoming a really fun way to be able to interact.” The 12-year-old in me was very excited about all that.

The Daily: You’re still close to the “New Girl” costars and you’re always promoting their new projects. Would you ever consider collaborating with them in the future if the opportunity presented itself?

Johnson: Absolutely. I hope to collaborate with all of them. Zooey and I, we text at least every week and we have since the show, and we probably will forever. Max Greenfield and I were texting this morning, Lamorne and I were on the phone yesterday, Hannah Simone and I text each other quite a bit. When the show became popular, there was nobody in my life I could call and say like, “This is really crazy, New Girl’s a hit.” Nobody really knows what that feels like besides, Zooey, Max, Lamorne and Hannah. The first time I dealt with being recognized on the street as Nick Miller, I was at the Art Institute with my wife over Thanksgiving during the first season, and these three teenage girls were following me around. And I gotta tell you, I got spooked out. “What do these young girls want from me? What have I done? Am I being bullied by teenage girls?” And then one of them turned around and said, “Sorry, are you Nick Miller?” And I was like, I forgot the show is a big hit. So I text Max and tell him and he’s like, “Yeah man, I’m on a trip and that happened to me.” And then we’ll talk about how we’re going to deal with it. We all have each other’s back in a very deep way. It’s a different bond than I think I’ve had with any other group.

The Daily: What’s your favorite project you’ve done so far?

Johnson: I like them all for different reasons. I just did a movie with Trent O’Donnell. O’Donnell was my favorite director at “New Girl.” He was our producer/director, he did probably 70 episodes. He was the glue behind it, the one person behind the scenes that didn’t get credit but really deserves it. He and I had been looking for a project to do together since “New Girl” and we wrote a movie together and we filmed that. We’re still in the process of finishing it, but I really love the project. I think it’s really special. Whatever project is the most recent feels the most exciting, and I really love this new one.

The Daily: What has it been like to work on that project during the pandemic?

Johnson: We created a pod, so we’ve all been doing testing, but we’ve got an unbelievable cast. J.K. Simmons is in it, Susan Sarandon is in it, D’arcy Carden’s in it. And everybody’s just really been so great. So we’re all taking precautions, we’re being as safe as we can, like everybody else in the world.