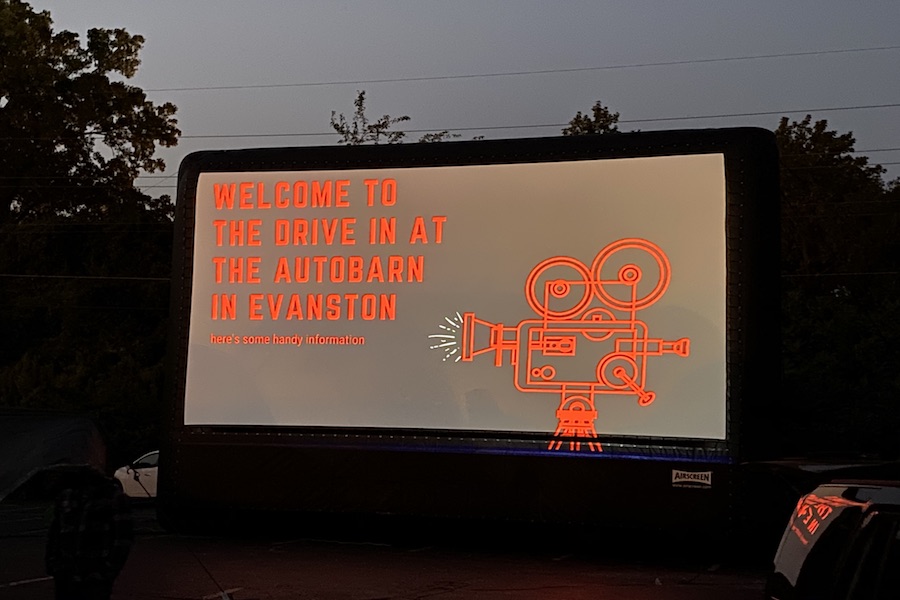 On Friday nights, the parking lot of Evanston’s Autobarn Service Center gets a unique addition: a giant inflatable movie screen.

Tucked away behind a shopping center off of West Howard Street, most people don’t even know the screen – let alone a car dealership – is there. But at 7 p.m. sharp, it lights up with scenes from a movie as attendees watch from their cars. Drivers turn their radios to station 89.9 to hear the film’s audio, and some open their trunks, cozying up with blankets in the backseat. It’s a full drive-in movie experience in the center of Evanston.

Evanston resident Patrick Hughes, Jr., director of business development at Byline Bank, never planned to organize a weekly drive-in movie, which as far as he knows is the first in the city’s history. But he’s grateful he did. The event has become a popular weekend destination for residents, and is raising hundreds of dollars for Rotary International, a foundation focused on humanitarian issues such as fighting disease internationally, and is headquartered on Sherman Avenue.

“People need something to do right now,” Hughes said. “Drive-in movies give people something to look forward to, and allow them to support a foundation that’s doing good for the world.”

Hughes grew up in Evanston, but didn’t learn about Rotary and its mission until later in life. He wanted to support the foundation’s efforts, so he founded Evanston Loves Rotary, an organization that aims to spread awareness about Rotary in the city.

Before the pandemic, Hughes’ organization worked on launching efforts to inform the local community about Rotary’s work. But in March, Evanston Loves Rotary had to quickly pivot their efforts due to the pandemic. Hughes spent time brainstorming ideas for informational campaigns and virtual events, but both were missing the element of togetherness he strived for.

Eventually, he came up with the idea for drive-in movies. Ticket sales could raise money for Evanston’s local Rotary clubs, and people could be together while they maintained social distance in their cars. Hughes said he knew it was a large undertaking, but was excited and passionate about it.

Before anything else, Hughes needed to find a place to host the drive-in movies. He found it in Autobarn’s parking lot, a large, open area that was easily accessible to cars, as well as within the city’s boundaries. Autobarn’s parking lot was perfect. Hughes called Richard Fisher, owner of Autobarn, and explained his idea.

“I basically asked to borrow his parking lot,” Hughes said. “It’s a no man’s land over there, so when people came to the movies, they would also learn where Autobarn is. It felt like a win-win situation.”

Autobarn isn’t the only local business involved in the event. The screen and projector for the movies comes from Davis Theater in Chicago, and Hughes enlisted the help of Annie Coakley, executive director of Downtown Evanston. Coakley volunteered to coordinate ticket sales and advertising, and also lined up a handful of restaurants to sell their food at the movies. She developed a system where people could buy tickets online and simultaneously place orders for food. Then, when attendees check in to the movie the night of, their food is waiting for them in prepacked takeout containers.

“Restaurants have struggled so much this year,” Coakley said. “This is such a great way for them to make a little bit of money.”

After weeks of preparation, the first drive-in movie night was held in September. Dozens of people came to Autobarn’s parking lot to watch “The Goonies” and enjoy what Hughes has come to call a “COVID-safe night out.” After the event, Hughes emailed a survey to attendees and said he received only positive feedback. He and his team subsequently added more movie nights to the calendar, showing family-friendly films from “Beetlejuice” to “Home Alone.”

Movie nights are currently scheduled through December, and some even have sponsors, like Northwestern University and Hagerty Consulting, Evanston’s mayor’s emergency management consultancy. Additional restaurants have also gotten involved, such as Ovo Frito Café. Zinnia Iglesias, owner of Ovo Frito, said being a part of the event made her feel more connected to Evanston’s community, and supported her restaurant during a time when many are suffering.

“Our business has been hurt by this pandemic,” Iglesias said. “Selling 60 burritos at the movie night helps a lot, and it gets our name out there.”

As families and friends drive into Autobarn’s parking lot on Friday nights to watch a movie on the big screen, Fisher said he sees how happy and joyful they are. They’re smiling and laughing, and for a moment, can forget about the chaos and uncertainty around them. Fisher is thankful that the drive-in movies have given Evanston residents an outlet to have fun over the past few months, and, in partnership with Hughes, plans to continue hosting the event in the future.

“We’re going to keep doing this, even post-pandemic,” Fisher said. “These movie nights have been inspiring to us all.”