Football: Northwestern and Wisconsin to meet with West Division on the line 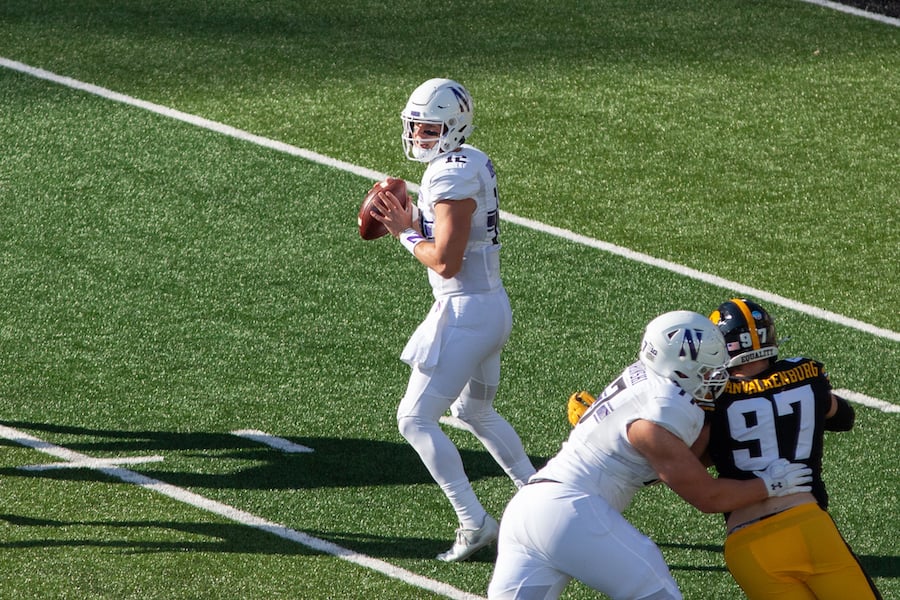 For the past four seasons, the winner of grudgefest between Wisconsin and Northwestern went on to represent the West Division at Lucas Oil Stadium for the Big Ten Championship.

That streak is likely to continue as the No. 10 Badgers and No. 19 Wildcats face off Saturday at Ryan Field with the top of the division hanging in the balance.

“You are going to have to earn it,” Wisconsin quarterback Graham Mertz said. “It’s going to be a gritty game. Whoever wants to play harder, play smarter and play more physical will win the game.”

The top teams in the East Division — No. 3 Ohio State and No. 9 Indiana — also play Saturday in a game set to determine the frontrunner for the division crown. While the two contests won’t affect the other’s division title chances, it will dramatically impact each other’s College Football Playoff chances.

While there is still over a month before the College Football Playoff is revealed, the Cats’ odds of being in the final four will skyrocket if they upset Wisconsin, who most Sportsbooks have as a 7.5-point favorite.

According to ESPN’s Allstate Playoff Predictor, NU currently has a 3.3 percent chance to make the College Football Playoff. A loss to the Badgers would drop that number to 1 percent or below. But a victory over Wisconsin would jump that percentage to 18 percent if the Buckeyes win and a bewildering 28 percent if the Hoosiers pull off the upset.

But before Cats fans start dreaming, NU has to take care of business on the field. And the Badgers are the best team the Cats have faced so far.

Wisconsin has played only two games this year due a COVID outbreak on the team, but has looked absolutely dominant. Against Illinois and Michigan, the Badgers outscored their opponents 94-18 and doubled their combined total yardage.

“They’ve been consistent challengers and winners of the Big Ten West now for a number of years, and it comes down to their players are incredibly talented,” coach Pat Fitzgerald said. “I think they play and have always played an unselfish, physical brand of football.”

Mertz, inserted into the starting role after incumbent Jack Coan had foot surgery in October, has been impressive. A top recruit coming out of high school, Mertz threw for five touchdowns in the opener against the Fighting Illini.

And while the Badgers are the Cats’ most impressive opponent, the inverse is the same as well.

NU’s defense is operating at an elite level right now, ranking No. 7 in the country in points allowed and No. 11 in total defense. Wisconsin does rank No. 1 in both categories, but while the Badgers beat up on teams that are a combined 2-6, the Cats’ first four opponents are 7-2 in their other games.

All three levels of the defense are matching each other. The line led an incredible effort against Purdue’s rushing attack, holding the team to a mindblowing two total yards over 60 minutes of action. The senior linebacker trio of Paddy Fisher, Blake Gallagher and Chris Bergin have combined for 103 total tackles. The defensive backs have shut down opposing pass attacks and lead receivers, including potential All-American David Bell.

“I’ve got a ton, a ton of respect for (defensive coordinator) Mike Hankwitz and what he does,” Wisconsin coach Paul Chryst said. “He plays to his talent and his players understand it and they execute it.”

The NU offense proved once again Saturday that it has what it takes to win games. Quarterback Peyton Ramsey had his best performance since the opener, tossing three touchdowns to Ramaud Chiaokhiao-Bowman and throwing for 212 yards.

But the run game struggled to get going, finishing with an average of two yards per rush. Against a tough Wisconsin front, winning the line of scrimmage will be crucial to getting Isaiah Bowser, Drake Anderson and the entire running back core space to make plays, especially if the Cats are trying to run out the clock.

“It is going to come down to fundamentals,” junior center Sam Gerak said. “Pad level, getting hands inside — those do not go unnoticed. Those are crucial details in run blocking. Those are going to be the most important for Wisconsin.”