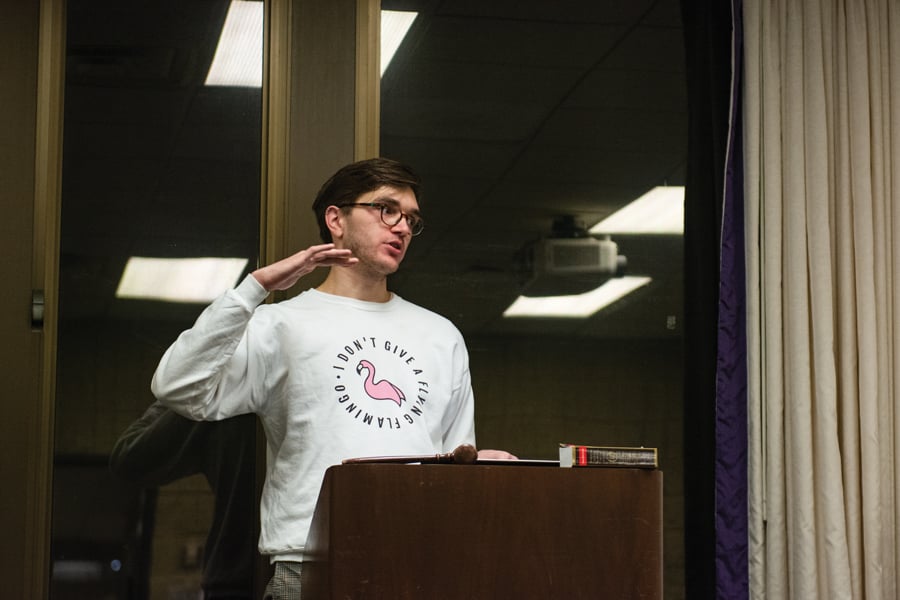 Current speaker of the Senate Matthew Wylie. The Weinberg junior came under fire at Wednesday’s Senate meeting for his sharing of a racist meme in a private ASG communication channel in January.

“It made me really uncomfortable that (the executive board) was so comfortable with having a professor who I’ve seen use anti-Black class content about runaway slaves who hasn’t recognized or apologized or even tried to correct for that behavior,” Gurney said.

Students have alleged Witte has brought inappropriate content regarding the slave trade into his classroom.

The meeting brought back conversation about a racist meme sent in private communication by speaker of the Senate and Weinberg junior Matthew Wylie in January. Gurney said this meme portraying “Asian people with COVID” and “plague masks” was not condemned and Wylie did not take accountability for harm caused.

Rather, Gurney said ASG’s tendency to cover this behavior within the organization sets a precedent where that behavior is tolerated, creating an unsafe environment where people end up quitting.

“The people that have caused harm are still here, and they’re still in positions of power, and they’re still joking around and smiling when people are protesting in the streets,” Gurney said. “And you will laugh and joke about that stuff, and then you get championed for that. That’s just not right.”

During the meeting, Gurney said there were many occurrences where Black students in the organization were cut off. People who hold positions of power in ASG need to provide an apology where one is warranted, he said.

Wylie apologized for his actions from January and addressed the allegations made against him.

“I didn’t feel that it was appropriate for me to make a statement at the time because I was told by multiple members of that community that they did not want to hear from me at that time, and that I should not speak concerning that because it would only cause more harm,” Wylie said.

SESP junior Soteria Reid, former executive officer for justice and inclusion, said as one of the few Black women in ASG she did not find Wylie’s statement to be enough.

“I think the most important thing is to show up and hold our communities accountable for the harm that they caused and to take responsibility for the impacts that we have on other people,” Reid said. “I think that that’s the one thing that I saw that was lacking in last year’s addressing of the incident.”

Wylie said he did not respond at the time because he was “scared of Soteria,” alleging she said he was “racist and evil.”

But Multicultural Greek Council Senator Naomi Bañuelos highlighted how Wylie, in claiming he was scared of Soteria, engages in a deeply anti-Black and racist trope. Reid also said she never made comments characterizing Wylie as racist and evil.
Throughout the meeting, Wylie cut Black women off, which Gurney said demonstrated his lack of accountability for his actions.

“Your immediate response is ‘OK, OK, OK.’ You’re cutting them off before they’re even done with their sentence,” Gurney said. “You didn’t cut me off. Why? Because I’m a man. Why? Because I’m not Black… You have to let people speak first while they’re trying to hold you accountable.”

Weinberg sophomore and For Members Only Senator Jason Hegelmeyer introduced legislation that would guarantee a seat for the organization. Traditionally, non-enshrined student groups must reapply yearly for a Senate seat. Hegelmeyer told The Daily that it was unfair that Greek life Senate seats are guaranteed, but Black students are forced to reapply for their singular one.

He referenced proposed legislation that sought to remove Greek life seats and give one to FMO. The amendment was denied.

The Senate voted to table the business until Winter Quarter.

“I’m not sure how (Greek life organizations) get four seats but Black people can’t even get one,” Hegelmeyer said. “We’re literally watching Black students sacrifice their bodies, academic careers and everything and I have to consider it now (that) we had to vote to table until next quarter.”

Several ASG Senate members commented in the Zoom chat to address the FMO legislation in the Wednesday meeting.

Hegelmeyer told The Daily this attempt to reconcile for tabling the legislation is not enough to justify that ASG cares about Black lives.

“I don’t think when ASG was founded, I don’t think it was based on the thought of uplifting Black and brown and other marginalized groups. That wasn’t probably in their intentions,” Hegelmeyer told The Daily. “Can you reform a broken system?”

Correction: This story was updated with additional comments at the meeting from Naomi Bañuelos and Soteria Reid.