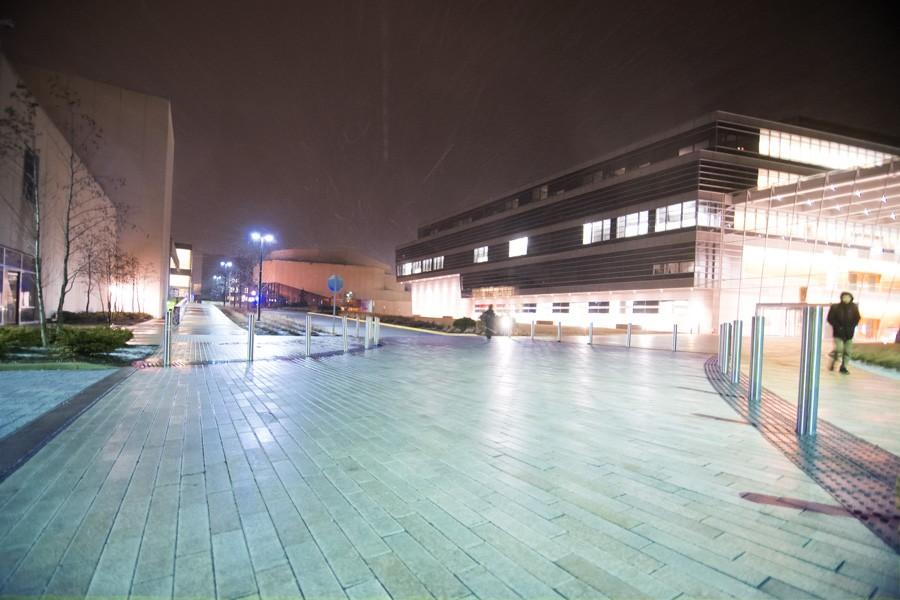 The Patrick G. and Shirley Ryan Center for the Musical Arts is one of the buildings that Northwestern theater students often perform in. Communication senior Carter Liebman published a blog this summer criticizing the theater department.

Four years ago, Communication student Carter Liebman came to the Northwestern theatre department with aspirations of working as a lighting designer professionally. He worked on student-run productions as well as Wirtz shows, took the limited number of lighting classes available and committed to, sometimes, several shows in a single ten-week quarter.

But, by the end of his sophomore year, he crashed. Now, Liebman says he doesn’t think he’ll ever return to working in the theatre world.

“It just led to the most horrific burnout I think I’ve ever experienced — will ever experience,” said Liebman, now a senior. “It was disastrous for my mental health trying to be in the theatre program at this university.”

Over the summer, Liebman wrote a series of blog posts titled “Northwestern Theatre Does Not Care About Undergrad Designers,” which pointed to poor advising and flawed curriculum as reasons he felt unsupported in the theatre community. Ultimately, he chose to pivot away from lighting design, and said he is only a theatre major in name.

Liebman said the lack of classes or training available in theatre safety also made him feel unsafe when working on Student Theatre Coalition projects.

McCormick and Communication sophomore Zoe Snead, who has worked as a technical director and set designer for StuCo shows, echoed this sentiment.

“You get a lot of people — and this is only my experience as a technical director — where we’re like “okay it’s time for build,” and then nobody knows how to build anything,” Snead said. “I would love if there was more standard education on how to build things and what theatre safety looks like.”

Another point of contention Liebman wrote about was the lack of design-focused classes available to students, leading the department to allow undergraduate students to take MFA design classes as a supplement.

While some undergraduates have had success taking MFA classes, they emphasized that it took a lot of preparation to feel comfortable in classes that cover advanced software and methods.

While Communication junior Sam Kim has appreciated the option to take MFA courses, he said he wishes there were undergraduate-level courses on the industry-standard skills MFA courses require a background in.

“MFA courses are not a viable alternative,” Kim said. “MFA courses are… meant for people that are professionals. I feel like there should be other options for in-depth learning that are not as expensive, time-consuming and academically tolling.”

Kim, who focuses on sound design, said he has struggled to find classes relevant to his interests. Northwestern doesn’t offer sound design classes within the theatre major, even though sound is a major component of theatrical productions.

Communication senior Adrian Waller has spent her time at Northwestern studying performance as well as costume technology. Waller found that, compared to performance opportunities, there is a lack of communication from both the department and Wirtz about how to get involved with design outside of class.

“I never really found out ‘how do you become an assistant costume designer on a Wirtz show?’ Is that a role that they post? Or is that something that I should be proactive and reach out about?” Waller said. “Coming into college, you already have so many other kinds of things going on and new experiences and things to tackle that it can kind of feel like just one more thing to also try to navigate.”

While Waller said the people who work in the Wirtz costume shop were helpful, she felt guilty asking them for guidance in addition to their regular jobs. The designers and technicians at Wirtz, Waller explained, are generally not professors, but instead people hired to create the sets, props and costumes for Wirtz productions.

Besides flawed curriculum and poor communication, Liebman brought up feeling unsupported by professors and his academic advisor. The title of the blog, “Northwestern Theatre Does Not Care About Undergrad Designers” is a bold statement, but design-focused undergrads found some truth in it.

“The spirit of (the title) is true. I think it is phrased in a way that is slightly overly harsh, at least based on my experience,” said Communication junior Henry Muller. “I would say that Northwestern theatre does not care as deeply or fully support the design community.”

Muller has worked primarily as a lighting designer, both on StuCo shows and as an assistant on Wirtz shows. He is also in the design module, which is a series of classes focused on design within the theatre major, akin to a minor or concentration.

At the end of his first year, Muller met with Prof. Eric Southern to discuss his concerns about the existing module and what classes he should be taking in the future. Muller said meeting with him eased many of his anxieties about being behind in his education, and has felt heard as Southern, the new coordinator of the design module, works to restructure the module.

In addition to the module, other components of the theatre major curriculum have changed since Liebman was a freshman. Production in Context, a first-year required class, was discussed by some older students as inadequate for fostering design understanding and appreciation.

Prof. Barbara Butts, who usually teaches the class, said Production in Context looks at non-performance aspects of theatre as different forms of storytelling. She emphasized the shifting nature of the class.

“My classes are not frozen in time,” Butts said. “As the profession changes, as our direction shifts and priorities shift, it’s up to me as an educator to stay current. I am aware of when my courses fall short and how they succeed. And I am constantly learning and trying to make better courses to serve all students.”

Butts, who is the coordinator of the Theatre Management module, has also been in conversation with Southern about improving the design module, and said she hopes it can become a more supportive community.

“I am hopeful that with Eric being in charge of the module, that there is a place for undergrads. I know that personally, that’s super important to Eric,” Butts said.

Despite his frustration and disappointment, Liebman said he wouldn’t have written the public blog — which he hopes to add to in the coming months, focusing more on StuCo — if he didn’t think a change was possible.