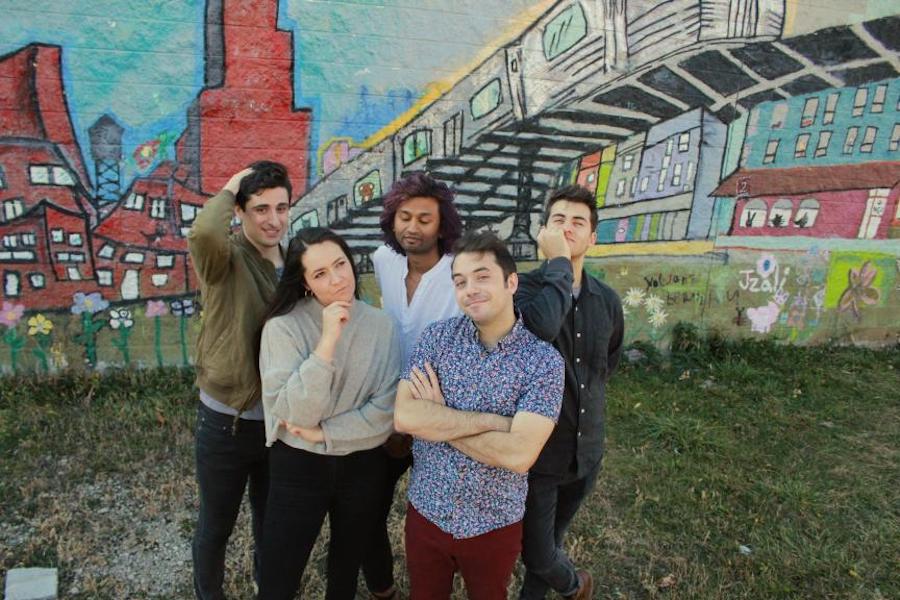 Violet Crime in front of a mural in Chicago.

“The Chicago music scene is unfathomably based on community, love and support. ” Taylor Ericson, lead vocalist for indie band splits, said. “Everyone is consistently trying to lift the scene, and all who exist within it, up. It’s all love.”

splits lead guitarist Claire Zhang formed the band in 2017 after posting on Facebook to gain members. By the summer of 2019, the current lineup was completed with the inclusion of Ericson, Ethan Urborg and Matthew Bactat. splits said they are proud to be best friends that support each other as they make music.

Another indie band, OK Cool, plays at many of the same venues as splits.

Haley Blomquist and Bridget Stiebris have worked together for four years, first in an 80s and 90s pop cover band, and more recently in The Weekend Run Club. They said they wanted to branch off on a project together to emulate the “grungy, emo” music that Stiebris listens to. The duo named themselves OK Cool, and this past June released “Anomia,” a three-song EP.

Stiebris described the group’s sound as “indie, grungy, sad boy music for girls.” Stiebris described “Anomia” as very depressed, reflecting the energy of a bleak winter. OK Cool took advantage of the pandemic by writing new music they plan to record this month.

The group, along with splits and Violet Crime, canceled all their shows due to the pandemic. In an unexpected silver lining, they said they all had more time to make music and refine their sound.

Jeff Mills lead vocalist for Violet Crime, is proud of “Paper Queen,” a pop rock EP the group released in 2019. After the release, the band spaced out performances in Chicago to avoid tiring out their fans. As a result, they were able to sell out their last three shows at Lincoln Hall, Beat Kitchen and Bottom Lounge. Like the other bands, Violet Crime has used the pandemic to write new material which will be released as singles or an EP.

“We have still been recording, but definitely taking our time with that. We are an interesting case cause none of us do music as our job,” Mills said. “We were like this is a nice little break, we could reset and really figure out who we are.”

For these indie artists, their passion for the music has kept them going, especially now.

After suffering a brain injury that damaged their memory, Ericson turned to music to find solace.

“Music has quite literally saved my life,” Ericson said. “So for me, music has always been something I’ve clung to even when I wasn’t fully aware of it. Music is always the thing I come back to and it’s always welcome back no matter what.”

Zhang, Urborg and Bactat shared the sentiment with their lead vocalist.

“Quite simply, music is one of the few things that makes me feel really alive,” Zhang said. “I’ve been playing a guitar since I was a kid. It’s one of the things that has stuck with me 15 plus years, and I don’t think it’s ever going to go away.”

Mills said nearly everybody within the Chicago scene knows each other. At most shows, several bands share a lineup and smaller bands gain larger followings by opening for other bands.

Before the pandemic, Stiebris had only written one song, back in college. She is grateful to have the time and drive to write music now. While OK Cool is a relatively new band that has not had much time to tour, the pair are veterans of the Chicago scene, who can’t wait for the opportunity to be able to play shows again.

“People just want to connect and know each other,” Stiebris said. “At the shows, you would see a lot of the same people. And there’s a lot of people I know now. We are people who all have each other’s backs.”