NUCNC, B. Burlesque twerk in front of Tech, protest NUPD 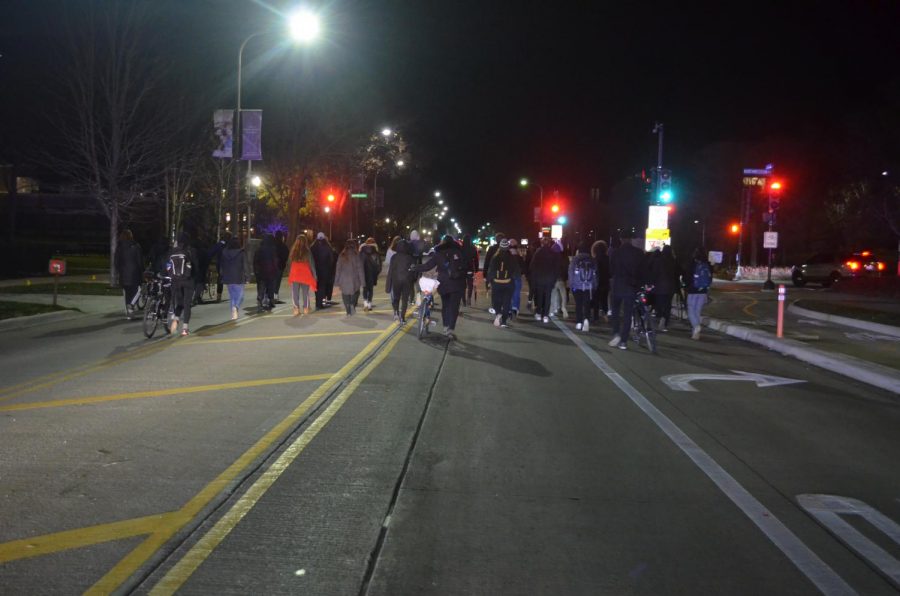 Northwestern Community Not Cops partnered with B. Burlesque Monday night for a protest-meets-dance party in the street outside the Technological Institute at 2145 Sheridan Rd.

About 50 students met outside Searle Hall before marching north on Sheridan Road and forming a circle outside Tech. Music played as students danced, cheered and drummed. To kick off the dancing, a speaker from B. Burlesque addressed the crowd.

“We stand here today to fight for and support the comfort and belonging of Black students on this campus,” they said. “And with that, we’re going to begin the twerk session as protest for our Black and Brown bodies and to (signify) our pride in our bodies and sexuality and sensuality.”

As students danced to Twerk by City Girls, THICK by DJ Chose, Don’t Stop by Megan Thee Stallion, The Wobble by V.I.C. and WAP by Cardi B and Megan Thee Stallion, two Evanston Police Department cars stood a few feet back, with cameras recording. At the beginning of the march, an officer repeated an announcement made Friday night that protest activities would be recorded and protesters should have “no expectation of privacy.”

Several other EPD cars were parked further down the street and stood blocking intersections down Sheridan Road.

As the group gathered outside Searle, they began the evening with two steps recently integrated into the NUCNC protest routine. The first was a participant check-in. In small groups led by protest marshalls, protesters checked in with one another sharing one word to describe how they were feeling. The second was a Land Acknowledgement.

Organizers recognized the Indigenous peoples including the Council of Three Fires — the Ojibwe, Odawa and Potawatomi people — as well as the Menominee, Ho-Chunk and Miami peoples who interacted with the land NU sits on pre-colonialism. The group also recognized how their fight for Black liberation is tied to a history of colonialism.

“We believe and acknowledge that we exist, march and fight upon land that is stolen,” one protester said to the crowd. “We are fighting for the liberation of all Black, Brown and Indigenous peoples.”

After the group marched to Tech, B. Burlesque, a dance interest group that promotes body and sex positivity for students of color, launched the action with a statement expressing solidarity for students demanding police divestment.

The statement, later shared on social media, told the story of a B. Burlesque show interrupted by police presence last Winter Quarter.

“We understand the harm, tension, violence and trauma caused by policing entities, particularly in POC spaces and are committed to uplifting community resources and groups,” the B. Burlesque speaker said.