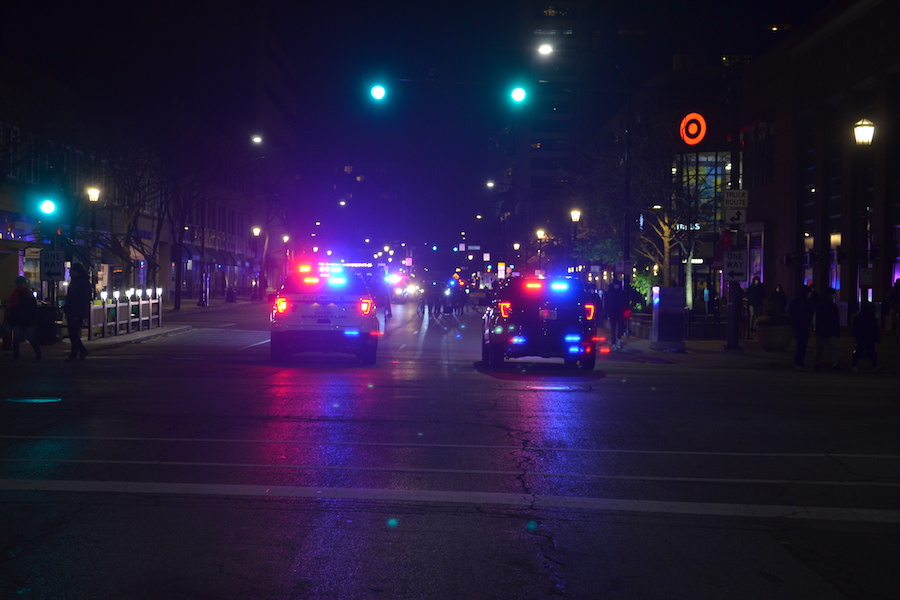 Evanston Police officers block off Sherman Avenue as students disperse following the conclusion of the march.

The day after activist and scholar Angela Davis spoke in support for NU student abolitionists, about 100 students gathered outside the Black House, located at 1914 Sheridan Rd. The group then made several stops at significant locations to Black history in Evanston, remembering individuals central to this history at each location.

Prior to the march, students reviewed safety protocols and community guidelines. While organizers said there were procedures in place to attempt to prevent arrests, they couldn’t guarantee that no arrests would be made.

“It’s OK to be scared and nervous,” one organizer said as the group assembled. “Angela Davis said that s–t. But we have each other.”

Throughout the march, the group was followed by at least seven Evanston Police Department and unmarked cars, including one K-9 unit. As the group marched down Clark Street, they passed four EPD officers standing on the steps of the Rebecca Crown Center.

At multiple points during the march, EPD cars repeated warnings over the intercom, cautioning protestors that interactions would be recorded and to have “no expectation of privacy.”

Students first assembled at the Black House, which is currently under renovation. The Black House, a recreational and gathering space for Black students since 1973, was moved to its current location after student negotiations prompted its creation through the Bursar’s Office Takeover of 1968.

The Black House went under renovation in 2019. Once renovations began, months passed before the University delegated a guaranteed replacement space, spurring an ASG petition demanding more autonomy for students in the Black House. Multicultural Student Affairs eventually announced 1856 Orrington Ave. as a temporary location in May 2019. The University has said the renovation is estimated to be completed in March 2021.

The first stop on the march was 619 Clark St., the current location of the Office of Treasury Operations. In the spring of 1968, however, the location was known as the Bursar’s Office, the site of business operations at the University. It was occupied by students for a day and a half until the student community and administration reached the “May 4th Agreement.”

Through the agreement, students negotiated the existence of a recreational space for Black students. This space was initially created at 619 Emerson St. and was eventually moved to 1914 Sheridan Rd., where it is known today as the Black House.

The takeover, among other demands, also resulted in the University’s agreement to acknowledge institutional racism and increase Black student and faculty representation.

Here, the group circled up and directed “We love you” singing to the Black students “who paved the way.”

Despite the Bursar’s Office takeover over 50 years ago, many Black students at Northwestern don’t feel those same demands have been fully met by the University.

The students walked west on Clark Street before stopping at 1813 Benson Ave., the original home of Ebenezer African Methodist Episcopal Church, Evanston’s first Black church. The church was officially founded in 1882 as congregants from the predominantly White First Baptist Church split off to become the original members of Ebenezer A.M.E.

After a 1902 fire destroyed the church, the building relocated to 1109 Emerson St., where it stands today.

As the group stood outside the church’s original home, organizers spoke to the crowd.

“We wanted to come to this location because faith and community is what keeps us going,” one said. “Because of this love we have for each other, Black people have come so far.”

In 1907, James Rayford Talley wanted to be a member of the YMCA. But, like other Black community members, he was denied membership.

In the early 1900s, the Black population of Evanston was growing but discrimination in the city was rampant, the Shorefront Journal reported. After Talley was denied entry to the YMCA, he and other local Black community members organized to provide programming similar to that of the YMCA in a lot behind a welding shop on Foster Street.

In 1909, The YMCA began making plans to establish a separate YMCA facility for Black people. Talley took a leading role in founding the new facility located at 1014 Emerson St., which opened in 1914. In addition to providing typical YMCA services like counseling and classes, the facility — known colloquially as the Emerson Y — served Black students from Evanston Township High School who were barred from the school’s sports and physical education facilities. Black male NU students roomed at the Emerson Y when Black students were barred from campus dorms. The facility, beloved by community members, was shut down in 1969 as part of a wave of integration efforts.

“We are here because the Y and people like James Talley have brought community,” an organizer said.

Students stopped at the original YMCA location at 1000 Grove St. and repeated the now-familiar chorus of “We love you” to Talley.

The final stop on the tour was 1619 Sherman Ave., the former home of William Twiggs Print Shop.

Twiggs, an active and founding member of Ebenezer A.M.E. Church and fundraiser for the Emerson Y, published two newspapers at the site — the North Shore Colored American in 1904 and the Reporter and Directory, a local newspaper, for a few years after.

Before housing a printing press, Twiggs’s store was a barbershop. It has since been replaced by a multi-story office building.

To close the night, protesters formed a circle on Sherman Avenue as organizers called all Black students to the center. The group repeated a round of “We love you” and sang “Ain’t Gonna Let Nobody Turn Me Around” as an organizer addressed them.