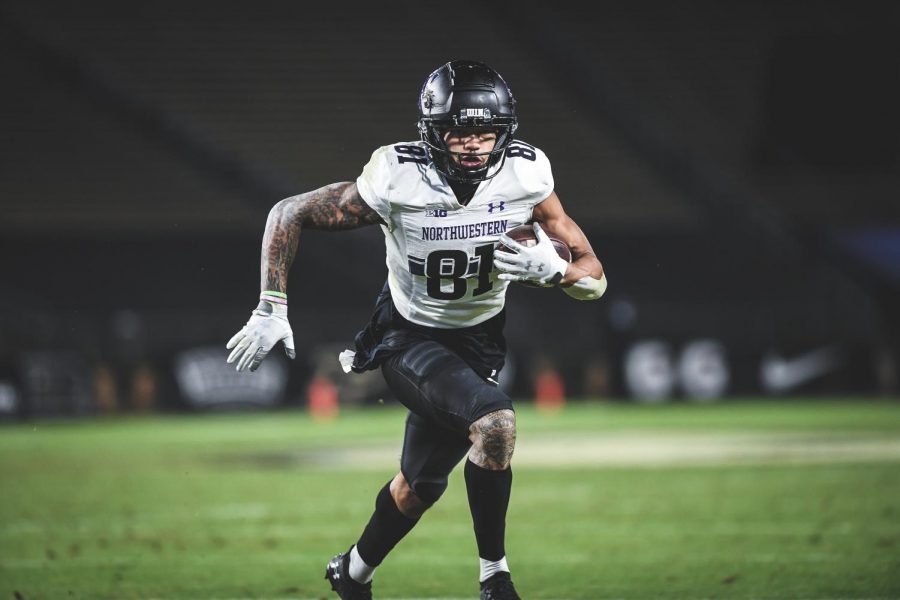 With the game tied 10-10 midway through the second quarter, Northwestern stood on Purdue’s 18-yard line following a holding penalty.

The Wildcats needed a spark, so they turned to Ramaud Chiaokhiao-Bowman.

From the shotgun, graduate quarterback Peyton Ramsey lobbed a beautiful pass to the senior wide receiver, who beat Boilermakers cornerback Dedrick Mackey for his second touchdown of the half .

But that wasn’t the last time Purdue would hear about Chiaokhaio-Bowman.

In NU’s (4-0, 4-0 Big Ten) 27-20 win over Purdue (2-1, 2-1), Chiaokhiao-Bowman had the best game of his Cats career. The Minnesota native set career-highs with eight catches for 86 yards and three touchdowns as NU continued its revenge tour against the Big Ten West by avenging last year’s loss to the Boilermakers.

“Awesome, just absolutely awesome,” coach Pat Fitzgerald said. “He’s put the work in and you know, I think his play tonight speaks for itself. I’m really proud of RCB.”

Heading into the Big Ten West clash, Chiaokhiao-Bowman led all Cats receivers with 11 catches and 102 yards. However, he had not found his way into the endzone.

In fact, the last time Chiaokhiao-Bowman scored a touchdown was more than three years ago. On Sept. 30, 2017, the then-redshirt freshman caught a two-yard pass from Clayton Thorson in a 33-24 loss to Wisconsin.

But after nearly 160 weeks, Chiaokhiao-Bowman found the promised land.

Six minutes into the opening quarter, he raced past Purdue safety Cory Trice, cut hard to his left and reeled in a nine-yard touchdown slant from Ramsey.

“I was excited,” Chiaokhiao-Bowman said. “I was super excited, but I was just ready for the O to go get another one.”

In the second quarter, he took his game to a whole other level.

On a second-and-18, Chiaokhiao-Bowman climbed the ladder to snatch a 12-yard catch on the sideline. The next play, he cut across the field on a drag route and snagged a diving catch to give NU a new set of downs before hitting paydirt for the second time at Ross-Ade Stadium.

By halftime, Chiaokhiao-Bowman caught six of seven targets for 74 yards and two touchdowns.

“We’re playmakers,” Chiaokhiao-Bowman said. “You go play, play fast, and you don’t really think about anything else.”

When he and the Cats jogged back onto the field for the second half, his stellar day was far from over.

Less than five minutes into the third quarter, a fumble recovery by senior linebacker Paddy Fisher set up NU in the red zone. When Ramsey — who finished with 212 yards, three touchdowns and an interception — took the snap on second-and-goal from the Boilermakers’ five-yard-line, who was there to catch a shoot route?

Running to his left, he caught Ramsey’s pass and raced to the left corner of the end zone, absorbing a tackle as he flew across the goal line to give the Cats a 23-10 lead.

“If you’re inside our facility, you know what he brings to the table,” Ramsey said. “(He) works on his game, works on his craft so much to be a great player. It was fun to see him out there have a really, really big game for us today.”

Chiaokhiao-Bowman went catchless in the final frame, but his last grab of the night was a big one. On a fourth-and-two from Purdue’s 46 near the end of the third quarter, Chiaokhiao-Bowman caught a pass as he came across the field and raced for a first down.

As the clock struck zero under a nighttime sky in West Lafayette, NU left the field having achieved a lot. The Cats moved to 4-0 in conference play for the first time since 1996 and extended their win streak at Ross-Ade Stadium to five.

Chiaokhiao-Bowman became the first NU receiver to catch three touchdowns in one game since Austin Carr against Iowa on Oct. 1, 2016.

Last season, the Minnesota native failed to reach 200 total yards and the end zone in 12 games. Today, Chiaokhiao-Bowman showed the Big Ten’s defensive backs that he is a different player than the one they faced in the past.

“I just really honed in on my skill as a receiver,” Chiaokhiao-Bowman said. “Watching film, watching how I was winning, how I was losing, on certain reps. It’s been paying off for myself and my teammates. We just trying to continue to ball.”