Football: Northwestern pass defense rises to the occasion against Purdue 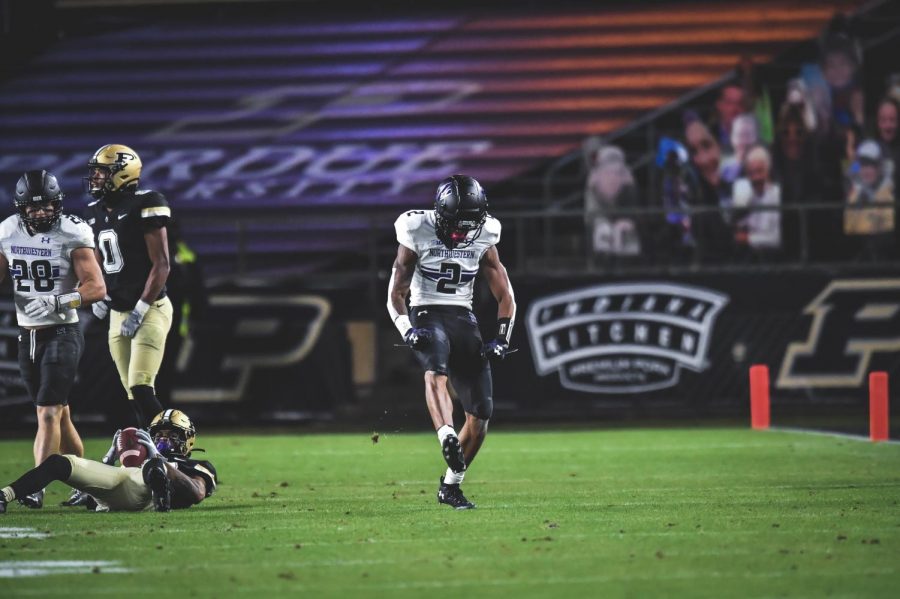 Greg Newsome flexes on the Purdue players. The junior cornerback finished the game with three tackles and two pass breakups.

Heading into Saturday’s important matchup with Purdue, the pregame emphasis from Northwestern fans was on the bout between Purdue’s aerial attack and the Wildcats’ dominating defensive backs.

And while All-American Rondale Moore strolled the sidelines in a mask and puffy jacket for the Boilermakers, the battle in the skies over Ross-Ade Stadium was a difference maker in NU’s 27-20 victory over Purdue.

The Boilermakers (2-1, 2-1 Big Ten) entered the game as the top passing offense in the conference with quarterback Aidan O’Connell averaging over 320 yards per game. Against the Cats (4-0, 4-0 Big Ten), the junior gunslinger made a couple big plays and threw for 263 yards, but his performance was a mixed bag overall.

A major reason why was the matchup between wide receiver David Bell and cornerback Greg Newsome II. Coach Pat Fitzgerald said earlier in the week that Bell was the best wideout in the country, and emphasized that fact again Saturday. But he thought Newsome rose to the challenge.

Bell finished the game with nine receptions for 78 yards, ending a streak of five straight games with over 100 yards. And while his nine catches were tied for a game-high, he was targeted 11 other times.

The sophomore receiver got the best of Newsome a few times, including on two pass interference penalties and a 16-yard reception in the third quarter. But when Bell got the ball, he was never able to break off for any explosive plays.

In particular, Bell had nothing going on any deep passes. Newsome said he knew Purdue liked to send Bell on fade routes down the field, so he prepared throughout the week to eliminate any game-changing plays like that.

“I’m a press corner so I’m gonna press so I know there’s going to be some shots down the field,” Newsome said. “I was just happy with the way I played the deep ball today.”

With Bell effective but not able to fully take over and Moore out, the Boilermakers needed someone else to step up. Senior Jackson Anthrop returned from injury but had only two catches, and Milton Wright — who had 178 receiving yards through two games — was contained to only 24 on Saturday.

Instead, the impact camout out of the backfield as running back Zander Horvath had a game-high 100 receiving yards on 10 carries, seven of which came in the second half.

On one crucial fourth-and-4 in the fourth quarter, Horvath caught a ball in the flat three yards behind the line of scrimmage. Newsome grabbed him around the legs, and fellow defensive back Cam Mitchell soon followed, but Horvath overpowered both and muscled his way over the first-down marker.

Horvath did have a career day catching the ball, it was more than neutralized by Purdue’s putrid rushing attack.

Purdue only ran the ball 17 times in the game. The emphasis on the pass game and the Boilermakers early and often deficits were major reasons for the lack of carries, the Wildcats incredible run defense also gave them no other option.

Horvath ran for over 100 yards in both of Purdue’s two previous games, averaging 5.37 yards per carry. But the front four of the Cats commanded the point of attack. The Boilermakers ran for only two yards the entire game. And except for one 14-yard run by Horvath, Purdue had zero runs for over five yards.

The defensive line was led by sophomore end Eku Leota, who finished with two sacks and a forced fumble.

“I got to give credit to the guys on the interior, (Adetomiwa Adebawore) and (Earnest Brown IV) just pushing the pocket, making these rat holes where the quarterback comes underneath, and I can just easily make the play,” Leota said.

All three of those plays came on third downs, when NU dominated. Purdue finished 4-for-17 on third downs the entire night for a conversation rate under 25 percent. O’Connell was 5-for-11 throwing the ball on those downs, but only three of them resulted in the chains moving.

While the Cats emerged victorious from the dog fight, it was not a perfect performance. But after a fourth straight outstanding showing from the defense, NU is demonstrating that it can contain even the best the Big Ten has to offer.

“We are getting production from all three levels,” Fitzgerald said. “When you’ve got that, you’ve got the making of a group that if they keep playing like this can be really spectacular.”