Football: No. 23 Northwestern improves to 4-0 with road win over Purdue 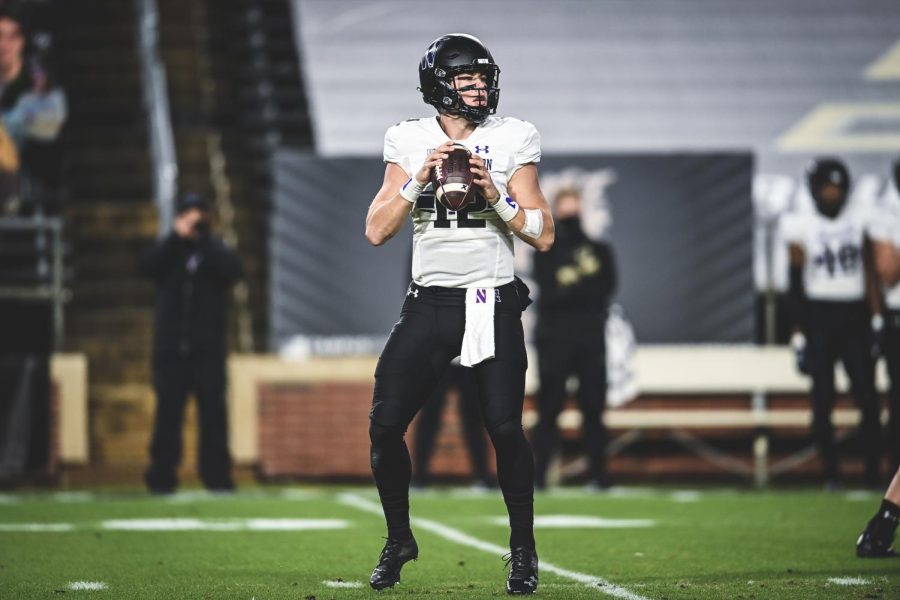 The Cardiac Cats, it appears, are back.

Northwestern took it down to the wire, but once again came through with late-game, explosive defensive plays to clinch a 27-20 win over Purdue on a rainy Saturday in West Lafayette.

The Wildcats are now 4-0 in Big Ten play for the first time since 1996, back when Pat Fitzgerald wore pads and a helmet for NU, not a sweatshirt and a mask, and before most of the players on this season’s roster were even born.

Graduate quarterback Peyton Ramsey finished with 212 passing yards on 23 completions, tying his previous season-bests set in the Cats’ season-opener against Maryland. Ramsey threw all three of his touchdowns to senior wide receiver Ramaud Chiaokhiao-Bowman, who caught eight passes for 86 yards in a career night.

“I thought they just really battled. Our guys were resilient, and they found a way to get the job done,” coach Pat Fitzgerald said. “Really proud of the way the guys are playing right now.”

NU (4-0, 4-0 Big Ten) started the game with a score on its first drive, the third time in four games it opened with a touchdown. The Cats moved the ball 75 yards down the field in 14 plays, the final of which saw Ramsey find Chiaokhiao-Bowman in the end zone for his first score since Sept. 30, 2017.

On the opposite end, the NU defense kept the Boilermakers — who were without star All-American wide receiver Rondale Moore, yet to make an appearance this season due to injury — to just 48 total yards and a field goal in the first 15 minutes.

The Cats got the ball back to start off the second quarter, and added to their lead with a career-long 46-yard field goal from senior kicker Charlie Kuhbander. As the kick sailed through the uprights and NU’s advantage stretched to 10-3, the rain in West Lafayette started to pour down.

The run game struggled against the Boilermakers’ front seven all night long. After two rush-heavy weeks against Iowa and Nebraska, NU could only manage a measly 2 yards per carry on 40 attempts, its fewest total rushing yards (80) since last year’s 20-0 loss to Iowa.

For a moment in the second quarter, it looked like the pass game would struggle, too, as Ramsey, battling the rainy conditions, threw an interception with less than 10 minutes before the break.

Purdue scored on the ensuing possession: Quarterback Aidan O’Connell found David Bell — who Fitzgerald called the best wide receiver in the country — on three straight plays, and then converted a fourth-and-1 into a 40-yard touchdown pass to tie the score at 10.

Ramsey said the offense knew the importance of its drive after that Boilermakers score.

“It’s always hard when you put your defense in a tough spot, and that’s the last thing you want to do is give the other team the ball with good field position,” the quarterback said. “Personally, I knew how big that next drive coming out was, and that we had to regain momentum, and get some confidence in our offense.”

It was about as good a response as the Cats could have hoped. Ramsey went 7-for-7 in the air, NU moved the ball down the field and Chiaokhiao-Bowman pulled in his second touchdown of the night to put the Cats up 17-10.

NU held Purdue scoreless for the rest of the half. In the air, junior cornerback Greg Newsome II held Bell without a catch for the Boilermakers’ final two drives before the break. On the ground, the Cats’ front seven forced Purdue’s run game to end the frame — and later the entire game — with negative rushing yards.

“(We were) winning the line of scrimmage,” said sophomore defensive end Eku Leota. “Our D-line was always penetrating. They (couldn’t) run the ball on us, ‘cause we’d just hit them in the mouth every single play.”

The Boilermakers came out with heightened momentum in the third quarter, but a forced fumble by Leota recovered by senior linebacker Paddy Fisher gave the Cats the ball back at Purdue’s 18-yard line.

The NU offense turned that chance into Chiaokhiao-Bowman’s third touchdown of the night, marking the first time a Cats receiver had caught three passes in the end zone since 2016.

NU converted on a number of important late-down situations down the stretch. Ramsey found Chiaokhiao-Bowman for a seven-yard gain on fourth-and-2 at the end of the third, and then pitched it to senior wide receiver Kyric McGowan for a 12-yard run on third-and-1 a few plays later.

Those offensive gains set up a Kuhbander field goal to put the Cats up 27-20 in the fourth, and gave NU a bit of a cushion as Purdue made a run in the final frame. The Boilermakers capitalized on two Cats penalties and converted on a pivotal fourth-and-4 to get one final score on the board and cut the deficit to seven points.

Yet once again, the NU defense made the plays it needed in the game’s final moments: Leota sacked O’Connell for a loss of 7 yards on third down, and then the secondary forced an incompletion on O’Connell’s last-ditch attempt on fourth-and-14.

“I just think our guys are tough, man,” Fitzgerald said. “There haven’t been any ‘yellow brick road’ games. We’ve taken on three of our West foes and we’ve found a way to get it done, and we’re moving on.”