Football: Running back depth to carry Wildcats over next five games 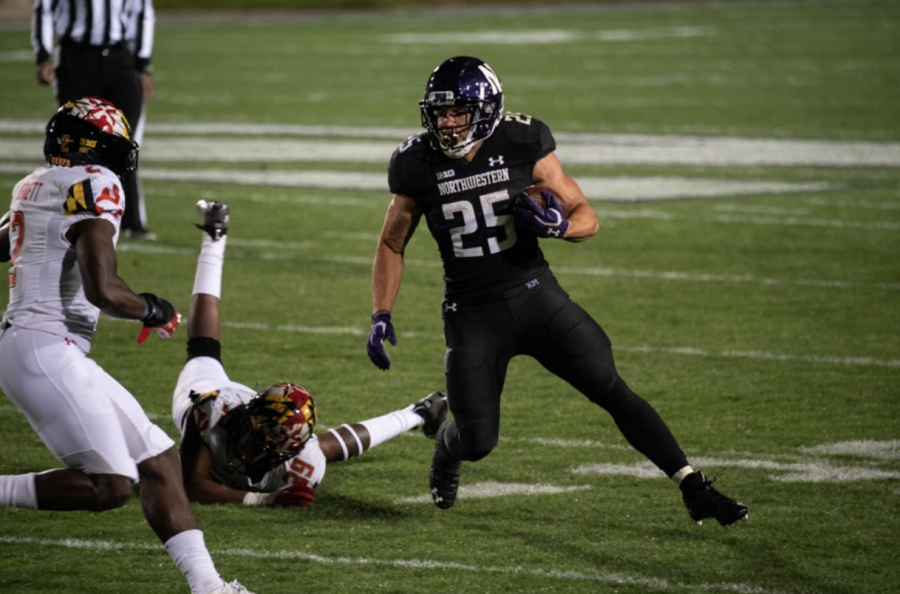 (Daily file photo by Evan Robinson-Johnson) Isaiah Bowser runs the ball. The junior running back is second on the team in rushing yards with 155 despite missing the last game against Nebraska.

Junior running back Isaiah Bowser stood on the sidelines in street clothes this past Saturday, before Northwestern’s battle against Nebraska. This image was unfortunately a common theme from last season.

The power back from Sidney, Ohio broke out during Northwestern’s run to a Big Ten West title as a true freshman, but a sophomore year with high expectations was hindered by injuries.

But if there was any silver lining from last season, the Wildcats’ inexperienced running backs got their playing time.

Drake Anderson led the team in carries and rushing yards a season ago. Evan Hull played in only four games to preserve his redshirt, but exhibited a big flash of his talent with a breakout 220-yard, 4 touchdown game against UMass. Jesse Brown rushed for 79 yards in 9 carries in the team’s second game of the 2019 season against UNLV.

Fast forward to this season and NU (3-0, 3-0 Big Ten) has a plethora of reliable running backs they can trust to help various aspects of the run game.

It’s clear that Bowser and Anderson are the two lead backs on the roster, racking up 83 of the team’s 151 carries. The two have proven to be complementary backs — Bowser is more of a between-the-tackles, one cut back while Anderson’s play style is more of a speed back. But Anderson’s big play-making ability on the outside isn’t indicative of where he likes to run style.

“I prefer to run inside,” Anderson said. “I like running straight forward, downhill rather than having to run outside, stretch it. I’m a lot more comfortable running downhill. Obviously, you see my size, you wouldn’t expect me to be in between the tackles, but that’s where I’m most comfortable.”

Outside of the two lead backs, Brown has been used as a goal-line back and coach Pat Fitzgerald praised his physicality after he scored two touchdowns against Iowa. Hull and true freshman Cam Porter benefited from a big lead against Maryland and saw action in the fourth quarter. All of the five running backs mentioned except Porter have also been involved in the aerial attack catching at least one pass so far this season.

“We have a really nice room,” running backs coach Lou Ayeni said. “We just try to find spots to get those guys the ball. Coach Bajakian’s offense is built around playmakers.”

Ayeni highlighted each of the five players’ unique contributions to the team — Bowser as a leader, Anderson as a dynamic runner, Hull as the hardest worker, Brown as the glue and Porter as the player with the “it factor.”

The Cats’ success offensively in the first three games has been in part determined by their efficiency in the running game. NU clobbered Maryland in the season opener and its run game was unstoppable. The Cats ran for 325 yards on 53 attempts — good for an average of 6.1 yards per carry — and scored four touchdowns.

NU had less success on the ground against Iowa, averaging 2.4 yards per carry with the Cats only able to put up 21 points. But 14 of those points came in the second quarter when the team’s ground game led the way with 23 carries for 102 yards and two touchdowns.

Last week, the team improved their running game and rushed for 3.9 yards per carry. But, if you take out Anderson’s 41-yard touchdown scamper in the first quarter, NU averaged just 2.9 yards per rush.

The Cats are sitting at 3-0 with five games remaining, meaning there is little room for error in the team’s pursuit of a Big Ten title. If NU’s offense wants to have sustained success moving forward, the Cats will have to rely on their running game.

Purdue ranks 11th in the Big Ten in opponent yards per rush with 4.7, so NU has the opportunity to assert their dominance. Anderson knows that he, as well as the rest of the running backs, have to produce at a high level.

“(There’s) always room for improvement,” Anderson said. “There’s always plenty of missed opportunities… Last week, I left some yards on the field and I really just gotta be in my playbook and watch more film.”