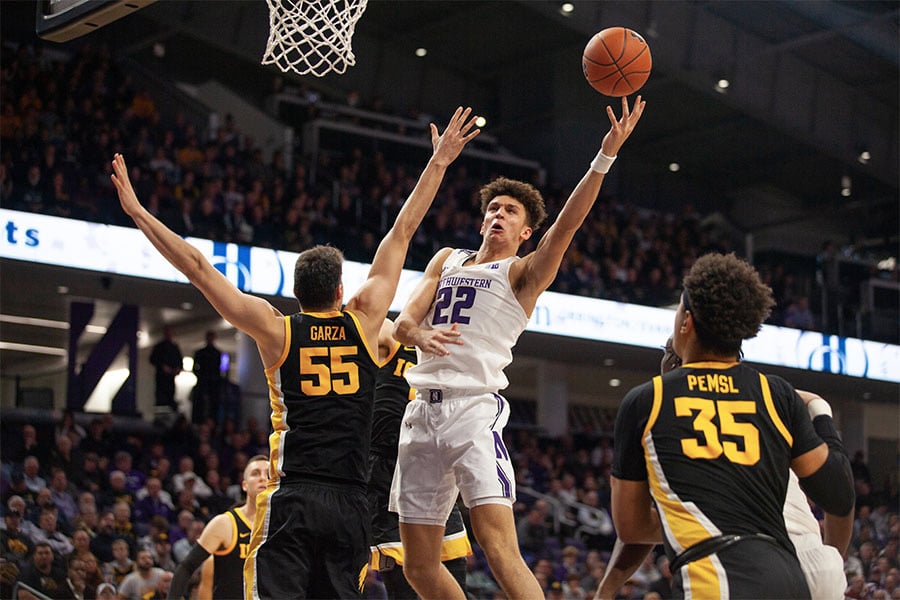 Pete Nance blocks a shot. The junior forward led Northwestern with 21 points in its loss to No. 10 Iowa.

Northwestern completed their 2019-20 season with a loss in the Big Ten Tournament to Minnesota in March. The NBA halted their season that night, and the following morning, the Big Ten canceled the rest of the tournament, turning the athletic world on its axis.

Now, coach Chris Collins and this year’s squad are heading into the 2020-21 season without a schedule or a road map for how to navigate the complexities of playing during a pandemic.

“I’d love to be able to tell you there’s a manual to go through this,” Collins said. “But we’re all trying to figure it out, even me as a coach.”

After a disappointing campaign last season, where NU went 3-17 in conference play, many of the Cats’ major contributors will be returning. NU returns much of their core roster, led by junior forwards Miller Kopp and Pete Nance, but does not have a single eligible senior on their roster.

The summer gave Collins the opportunity to meet individually with his players to work on specific areas of growth. “I’ve been really pleased with how all of these guys have approached the offseason,” Collins said.

Collins praised Nance and sophomore forward Robbie Beran for making muscle gains of 10 to 12 pounds and showing more confidence and maturity, and sophomore guard Boo Buie for improving his game management abilities. He also commended Kopp, who he called one of the most improved players in the Big Ten last season, and sophomore center Ryan Young, for being “rock solid” last year.

“Outside of (Kopp) last year, everybody else was very up and down with their shooting. To me, Ty is one of the better three point shooters in the country as an incoming freshman,” Collins said.

For this season, NU has gained sophomore guard and transfer Chase Audige, who sat out last year, and junior forward Anthony Gaines, who was also out with an injury.

“Even in the past five years, we’ve been able to win some games that — I call them grinders — when the offense isn’t going, but where your defense can win you the game,” Collins said. “We weren’t very good at that end of the floor last year. That’s been a big point of emphasis for us in these preseason practices, getting back to that level of defense.”

At the moment, the Cats do not plan to allow any fans into games at Welsh-Ryan Arena this season, with the possible exception of families of players, similar to the restrictions at Ryan Field this fall.

Without fans, Collins said the coaching staff emphasizes conditioning, so the team can find their own internal energy to rally late in games since they can no longer feed off a crowd.

“When you get in an environment, whether you’re at home or on the road, the energy that a crowd can give you when you get tired in a game…it gives you that boost that you need,” Collins said. “We’re not going to have that. It’s going to be a situation where you have to bring your own energy.”

Moving into this season, Collins said he will not continually bring up last season with the team. Though many of the team’s core players return this season, he said these Cats won’t be the same squad, as most of the returning starters were freshmen and sophomores last year and have grown significantly since then.

“Every year is its own kind of journey,” Collins said. “Every season is its own lifetime. The very first thing we talked about was, ‘Let’s not harp on what we did or didn’t do last year. Let’s move forward.’”

— Men’s Basketball: Northwestern ends season with a blowout loss to Minnesota in the Big Ten Tournament

— Men’s Basketball: After finishing his seventh season, Chris Collins is still a believer