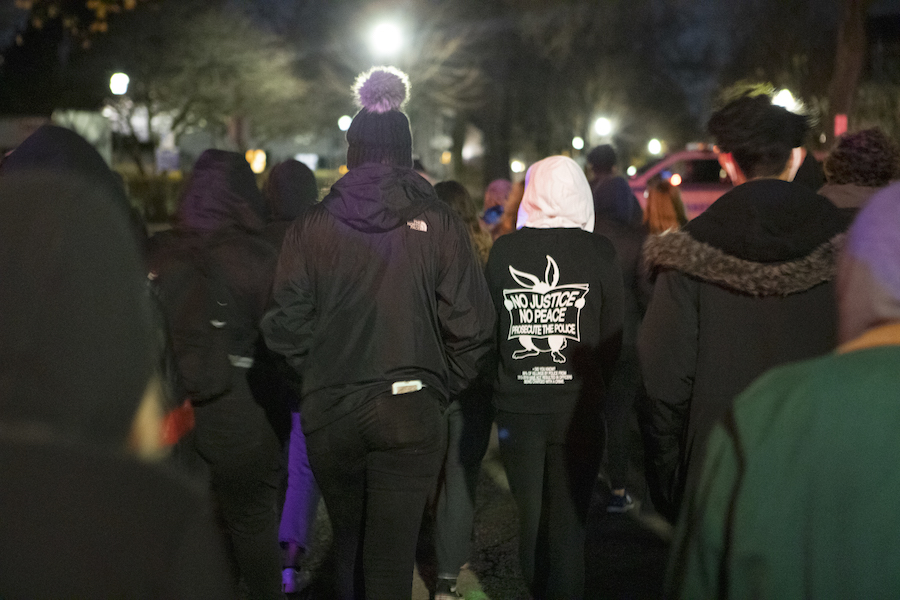 Wednesday’s action sought to continue the tradition of Black and Asian solidarity in mobilizing for the abolition of prisons and policing.

For their 31st day of daily actions to abolish University Police, NU Community Not Cops collaborated with the Asian Pacific American Coalition and Kaibigan, the Philippine-American student association, to show how Black and Asian American communities have a shared stake in the international prison-industrial complex.

Students held the intersection at Chicago Avenue and Sheridan Road for a teach-in Wednesday where speakers from APAC and Kaibigan addressed the crowd of about 60 people.

“APAC and Kaibigan stand in solidarity with NUCNC and the vision of a world without police and all militarized entities,” one speaker said with another adding, “Asian Americans can choose — and have chosen — to recognize that our liberation is not possible without Black liberation.”

The crowd assembled outside Foster-Walker Complex before marching east on Foster Street and then south on Sheridan Road where they then formed a circle at the intersection. At the intersection, the group was flanked by police cars — about 12 vehicles from the Evanston Police Department and UP combined, with one UP car stationed beneath The Arch and one EPD van positioned down the road.

This was a heavy reduction in policing from Monday’s action where over 70 officers in riot gear were deployed from the Northern Illinois Police Alarm System’s Mobile Field Force to manage the crowd of about 60 students. The officers held a tight line, confining protesters to the sidewalk and threatening arrest if they stepped onto the street. There was no evidence of NIPAS at Wednesday’s gathering.

As protesters gathered in the intersection, members of APAC and Kaibigan spoke about why their solidarity with NUCNC goes “beyond passive allyship” and comes down to a shared stake in the abolitionist movement.

They said the history of Asian American oppression is rooted in American imperialism, White supremacy and capitalism, citing the historical exploitation of Asian laborers in mainland U.S. and Hawai’i, the U.S. presence in the Philippines and nuclear testing in the Marshall Islands, which caused irreparable environmental damage.

“This culture has not valued our lives or our ancestors’ lives, unless they could be used for profit,” one speaker said.

The group expanded the issue of police violence internationally, referencing police violence and activist silencing in Asian countries such as the Philippines and Thailand and the city of Hong Kong.

Despite the connectedness of Asian American and Black oppression, organizers discussed how Asian Americans have historically been complicit in anti-Black systems via the model minority myth, which characterizes Asians as “model minorities” who achieve success through hard work and education. This stereotype is often used as an argument for the continuation of the prison-industrial complex and the criminalization of Black people.

But, as a graphic explained before the event, there is a history of solidarity and community building between Black and Asian communities such as a 1968 student-led strike at San Francisco State University which ultimately led to the creation of the College of Ethnic Studies at the University.

Wednesday’s action sought to continue this tradition of solidarity in mobilizing for the abolition of prisons and policing. As the action concluded, speakers reminded the crowd to continue to show up, protect each other and practice community care.

“We hope this motivates our peers, especially our peers in the Asian American community at this University to show up and show out for our Black peers,” a speaker said.