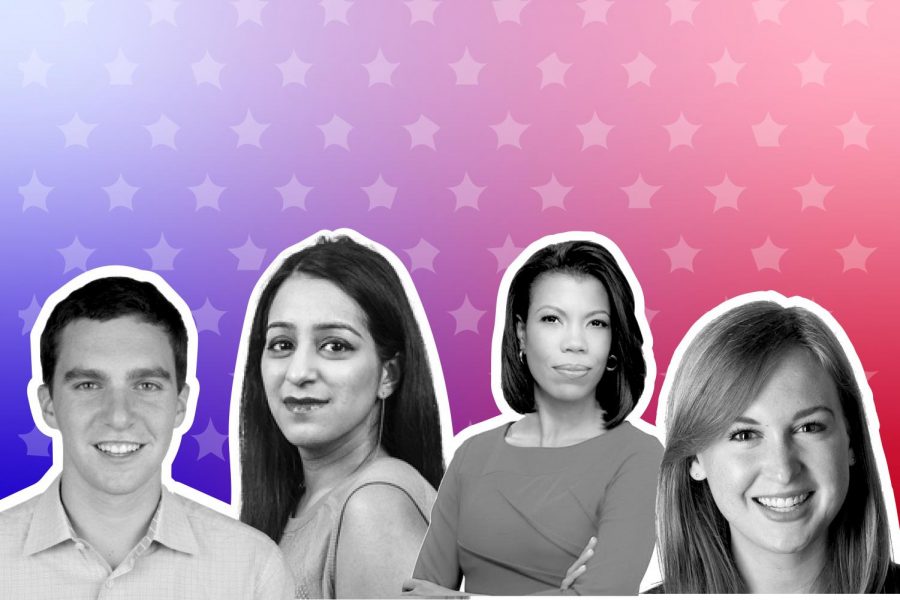 One week after Election Day, the Northwestern Alumni Association hosted a post-election panel of Medill alumni covering politics at major news organizations who offered their insights on the election.

The panel featured Nikole Killion of CBS News, Tyler Pager of Bloomberg News, Elena Schneider of POLITICO and Sabrina Siddiqui of The Wall Street Journal. Panelists discussed multiple topics concerning the present state of politics, journalism and what to expect in the future.

Due to COVID-19, the journalists said they did not experience traditional election coverage this election cycle. Siddiqui and Pager traveled with President-elect Joe Biden throughout his campaign trail among a protective pool of journalists.

Pager said there was a lot of uncertainty while reporting on the election. At the beginning of the pandemic, he said he was leaving Detroit with U.S. Sen. Bernie Sanders (I-Vt.) for Ohio when suddenly, he was told that the reporters were going to fly back to Vermont.

“We just didn’t really know what was going to happen,” Pager said. “We holed up in the hotel there as we started to adjust to a new reality.”

Siddiqui said she was part of a circle of socially distant, masked journalists at events with thousands of people. She recalled traveling with Biden to his rallies in early March just as the country began to shut down.

“We just kept thinking, ‘Should we be here?’” Siddiqui said. “Because we were at these rallies with thousands of people, and they have hand sanitizers upon entry, but we were like, ‘We feel like that’s not enough.’”

What also seemed to be spreading, Siddiqui said, was misinformation, both unintentional and intentional. She said the biggest inaccuracy spread by the media this election cycle may have been the misleading polls, similar to 2016.

“In 2016, where there were shy Trump voters, it turns out there (are) even more of them (now),” Siddiqui said. “We need to also understand as journalists that a lot of times voters tell you what you want to hear. A lot of weight is given to individual polls, and that is what is misleading.”

Schneider said the inability of the polls to “take the temperature of the electorate” is deeply concerning, and pollsters needed to evaluate whether there was a fundamental issue with polling before declaring the polling industry as dead.

The panelists agreed that the role of journalism was to keep the White House accountable to the electorate, and journalists must continue playing this role in the Biden administration — with everyone held to the same standard.

“As a journalist, we are the eyes and ears of the American public in the White House,” Pager said.

With Biden projected to win the presidential race, the panelists discussed the next biggest story on the docket.

They said some of the upcoming stories of interest will be Trump’s refusal to concede victory and the two Georgia Senate runoff elections. Killion emphasized that the most important story would be about the pandemic amid the news of the Pfizer vaccine.

“It’s not an accident that the president-elect made his first order of business announcing this COVID taskforce,” Killion said. “It’s just something that we can’t lose sight of, and that underscores each and every story we cover.”

However, they agreed that the inauguration of Vice President-elect Kamala Harris as the highest-ranking woman in America would play a significant role in the future of the country.

“Say you weren’t as jazzed about a 77-year-old White guy being at the top of the ticket,” Schneider said. “(Harris) represented the kind of history-making change that the presidential primary ever really promised.”

The panelists also addressed the role Harris’ husband, Douglas Emhoff, might have as a Second Gentleman.

“(Emhoff is) showing how men can be standing next to a very powerful wife,” Schneider said. “I think that that’s going to be some incredibly important behavior to just model for this country as we see women continue to turn and break into these executive positions.”

Siddiqui said the Biden campaign wanted to end the adversarial relationship between the White House and the press, and that they would be looking to run the presidency similar to the Obama administration.

One of the biggest questions the panelists had for the Biden administration was whether it would fulfill its promise of being more open and transparent — not only with the press but also with the public.

“Here’s the real test,” Siddiqui said. “How much are you actually going to return to some sense of normalcy and put an end to the reality TV show that we’ve all been living in in the last four years?”