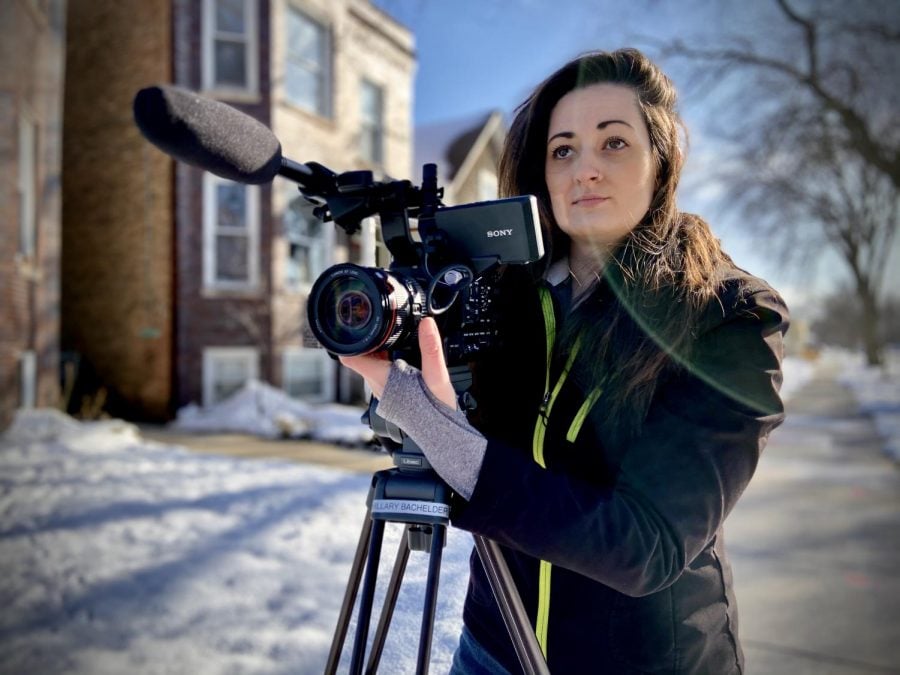 Hillary Bachelder (Communication ‘12) behind the scenes on her new film, “Represent.” The film features three Midwestern women running for local office and was released for streaming on Oct. 26 on PBS.

When Hillary Bachelder (Communication ’12) saw another Hillary on the ballot in the 2016 presidential election, an idea for a new documentary formed in her head.

“Seeing a ‘Hillary’ on the ballot was really impactful and stuck with me,” Bachelder said. “I was left with a sense of, ‘What is the importance of representation in our democracy?’”

Four years later, Bachelder’s film “Represent” premiered in the midst of a global pandemic and ahead of a controversial election. The film follows three Midwestern women running for local office for the first time: Myya Jones in Detroit, Bryn Bird in Ohio and Julie Cho in a Chicago suburb. “Represent” was released on PBS and is available for viewing until Nov. 25.

Bachelder, who was an RTVF major, knew she wanted to be a documentary filmmaker when she took Clayton Brown’s documentary class at Northwestern her junior year.

Since then, she has been involved in creating over 10 documentary films, the most recent being “Represent.”

As the director, cinematographer and editor of the film, Bachelder sought to explore what representation truly meant for the three women. Over the course of three years, she drove back and forth across the Midwest to cover the experiences of each woman.

“What fundamentally connected me to each of them was that they each were approaching politics as something they wanted to do on their own terms,” Bachelder said.

She said she intentionally chose to feature diverse women from different ages, ethnicities, political parties and economic backgrounds to provide balance to the film. She also became very invested in each of the three women’s campaigns and “desperately wanted each of them to win.”

Bachelder’s passion for the film was clear to those around her, including producer Anne Sobel (Communication MFA ’09), who knew Bachelder through NU and other documentary-based events.

“I had tremendous faith that she would treat subject matter really thoughtfully and that it would be something I would be proud to promote,” Sobel said. “I see her as a young woman who has a great career ahead of her in film.”

Sobel said it was “incredible” to see older, established filmmakers treat Bachelder as a peer and take her work seriously, even though she is relatively new to the field, having only graduated from college eight years ago.

Similarly, Leslie Simmer, one of the creative advisors for “Represent,” said that Bachelder is “spectacularly talented, smart and uber competent.” A longtime documentary mentor to Bachelder, Simmer spoke to her mentee’s drive and passion.

“She is an extraordinary human being, and I don’t say that about everyone,” Simmer said. “She has a certain gift.”

She explained that making a documentary is much more difficult than people think and that Bachelder took on even more as both director and editor of the film, excelling in both roles.

“Hillary saw it through and created something that’s really beautiful and worthy,” Simmer said. “She had a huge responsibility to her subjects as well as to her own artistic vision, and she did a splendid job.”

The film premiered on Oct. 26 on PBS, but it looked very different from the premiere Bachelder had envisioned when making the film.

Originally set to premiere at the in-person 2020 Cleveland International Film Festival earlier this year, the team had to pivot to an online release in October due to the festival’s pandemic-related cancellation.

“It’s heartbreaking not to be able to watch it in person with Myya and Bryn and Julie next to me,” Bachelder said.

But ultimately, she said she is very grateful for the opportunity and learning experience she had when making the film.

“I really love and value the relationships I have with each of the three women (in the film),” she said. “It was a big push outside of my personal and political bubble, but it was an incredible learning experience, creatively speaking.”