Football: Northwestern’s receivers off to strong start in 2020 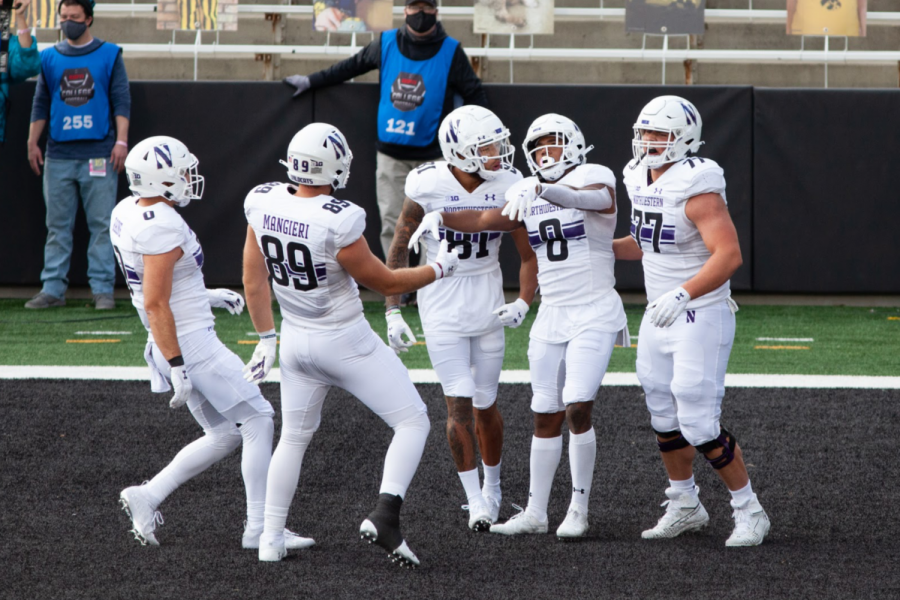 Kyric McGowan celebrates his three-yard touchdown run. The senior wide receiver is one of the leaders of a Northwestern wide receiver corps looking to make a statement in 2020.

Down 13 points to Iowa and with less than four minutes left in the first half, Northwestern needed a momentum shift to stay in the game.

On a fourth and three from the Iowa 38, senior wide receiver Kyric McGowan rose to the occasion. Graduate transfer quarterback Peyton Ramsey faked a sweep and fired a 12-yard pass to him for a first down. Five plays later, senior running back Jesse Brown crossed the goal line and cut the Hawkeyes’ lead to six.

At Kinnick Stadium, McGowan played one of his best games for NU. He grabbed a career-high five receptions for a team-best 63 yards and rushed three times for 15 yards and a touchdown in the Cats’ 21-20 win.

“I feel really good where I’m fitting in within the offense,” McGowan said. “Deep threat, over the middle, taking handoffs, whatever that may be, wherever my team needs me. It’s my mindset coming in. It’s just making the play.”

After catching the fewest receiving yards in the Big Ten in 2019, NU’s wideouts entered the season with a chip on their shoulders. Headlined by three seniors — Ramaud Chiaokhiao-Bowman, Riley Lees and McGowan — the position group has exceeded expectations to start the 2020 season.

The group has picked up a total of 342 receiving yards in victories against Maryland and the Hawkeyes and contributed on numerous critical-down plays.

“When our number is called, we make the plays,” Chiaokhiao-Bowman said.

Last year was an anomaly for the Cats’ wideouts. They only caught a combined 1,257 yards and six touchdowns as NU produced the nation’s fifth-worst passing offense.

Ramsey’s arrival in Evanston helped improve the Cats’ offense almost immediately. He was also able to quickly develop a rapport with McGowan and Chiaokhiao-Bowman. McGowan said Ramsey’s previous playing experience in the Big Ten has made his transition from Bloomington seamless.

Two games into the 2020 season, wide receivers coach Dennis Springer says Ramsey and the receiving corps keep learning from one another.

“It is continuity,” Springer said. “(Ramsey is) getting used to how Ramaud and Kyric and all those guys run different routes and different concepts. They understand when he’s going to let the ball go, where he’s trying to put it and there’s a consistency to that that builds and breeds confidence within the offense and the passing game.”

The Cats’ wideouts played a crucial role in NU’s comeback win over the Hawkeyes, as McGowan and Chiaokhiao-Bowman each made crucial third-and-long catches of more than 10 yards late in the game.

Additionally, the veterans needed to step up because Lees missed nearly the entire game with a lower body injury. After the Iowa game, coach Pat Fitzgerald described the injury as day-to-day.

Fitzgerald has not yet announced if Lees will be active Saturday against Nebraska. If he misses the conference contest, sophomore Malik Washington will slide into the starting slot receiver role and contribute right away. Ever since arriving on campus last summer, Washington has drawn rave reviews from coaches and players.

And he’s not the only underclassman impressing the group.

Redshirt freshmen Wayne Dennis Jr. and Genson Hooper-Price have turned heads as well, with Springer crediting the underclassmen’s growth to the tutelage of NU’s veteran wideouts.

“As they learn and grow in the system themselves, they’re passing all the information along to the young guys in the room,” Springer said. “It’s an unselfish group. Everybody wants to ball, but again, they also understand that we need everybody in the room to have success.”

For the first half of Saturday’s game, the Cornhuskers will be down junior cornerback Cam Taylor-Britt and senior Deontai Williams, who were ejected for targeting during a 52-17 loss to Ohio State.

But Chiaokhiao-Bowman — who leads all Cats receivers with 8 receptions and 83 yards — is not paying too much attention to their 30-minute absence. He said that he and his fellow wideouts will focus on themselves, no matter who is guarding them across the line of scrimmage.

“As wide receivers, our mouths water over any DBs we face,” Chiaokhiao-Bowman said. “It’s an opportunity Saturday to go ball and show everybody what we’re about.”