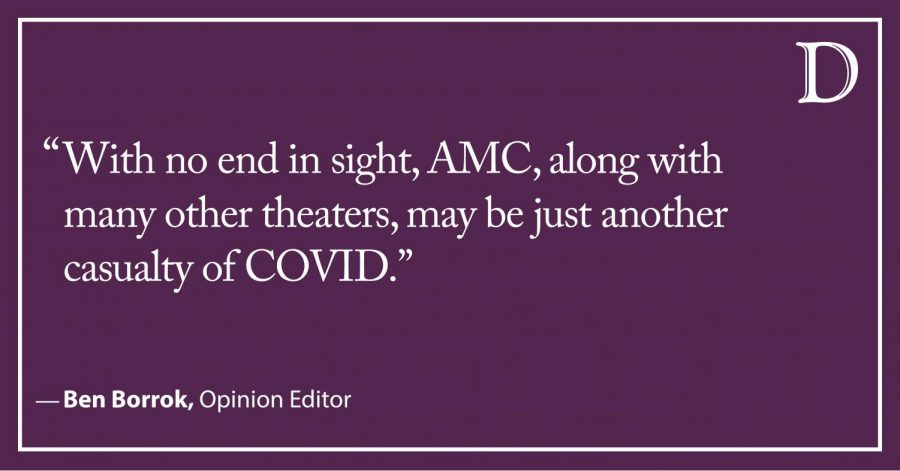 I was in need of a distraction on Tuesday. Election results would not begin to roll in for another few hours, and I had finished most of my assigned schoolwork. My social media feeds were hooked on the projected exit polls and discourse was beginning to run rampant. There was no escape. Without thinking twice, I instantly thought of going to see a movie. I had somehow briefly forgotten about the pandemic and its repercussions, envisioning a nice afternoon in the comfort of a movie theater.

I always preferred the theater to watching movies at home. There is something about the big screen, the popcorn and the seating that just seems to fit the occasion. These blockbusters, like the Marvel projects and the Fast and Furious series, require years of preparation and planning, not to mention the thousands of moving parts that must come together in order to put together a cohesive project. It seems only appropriate that they are viewed as the director and producer intended.

There is so much excitement associated with the movie theater. There is the anticipation upon arriving and selecting a movie to watch, the previews and the potential to be transported to another reality. You leave the theater feeling changed, moved by the performances and story you had just viewed. For me, it has never felt the same on a television.

With streaming services on the rise over the past few years, I have consumed far more content than I could have imagined. It is incredibly easy to sit down and find something that piques your interest, with loads of content fed to your account through algorithms. Despite this ease of access, I found myself paralyzed, both by the sheer amount of suggested content and by the presence of my phone and other devices in my vicinity.

Unlike theaters, there is no social etiquette for watching content in your living room. Need to answer a text? Pause the movie. Want to check social media? Pause the movie. Someone needs to use the restroom? Pause the movie. It disrupts the rhythm of the story, but also makes it far more difficult to become engaged in the content as well. I know so many people who use Netflix and other services as background noise while they scroll through Instagram and Twitter.

We are now confined to our living rooms to look for a source for entertainment, and the pandemic has created an uphill battle for the entertainment industry, which was already losing ground to streaming giants. AMC Theaters, which operates 1,000 theaters nationwide, is considering declaring bankruptcy after widescale closures due to the pandemic. With no end in sight, AMC, along with many other theaters, may be just another casualty of COVID.

There are a plethora of other reasons why theaters have fallen by the wayside; the prices for tickets and concessions are often more expensive than a few months’ subscription to Netflix. For families struggling with finances, it is no surprise why they would look to drop movie theaters from their budget. With inconvenient showtimes and substantially fewer movie selections, the industry needs to rapidly improve its product to keep people returning in the future.

Despite all of this, I am desperate for theaters to return. With the losses incurred by the theater chains, it may be easy to say that they are something of the past, that it isn’t financially worth it to support the industry. I understand this line of thinking, but I prefer to consider theaters from a different standpoint, one that considers what we could lose. For many small towns across America, theaters are the community center of entertainment, a place for people to open their minds to the stories and perspectives of others. We would miss out on defining moments of our culture, those movies that you just have to see, the ones that are discussed in every school and workplace. I am not sure if that can be replaced by a Netflix notification and discourse on Twitter.

At a moment like this, where everything seems to be taking a turn for worse, it would sure be nice to have a distraction as fun and engaging as a trip to the movies. Only time will tell, but I can’t wait to be seated once again in front of the silver screen.