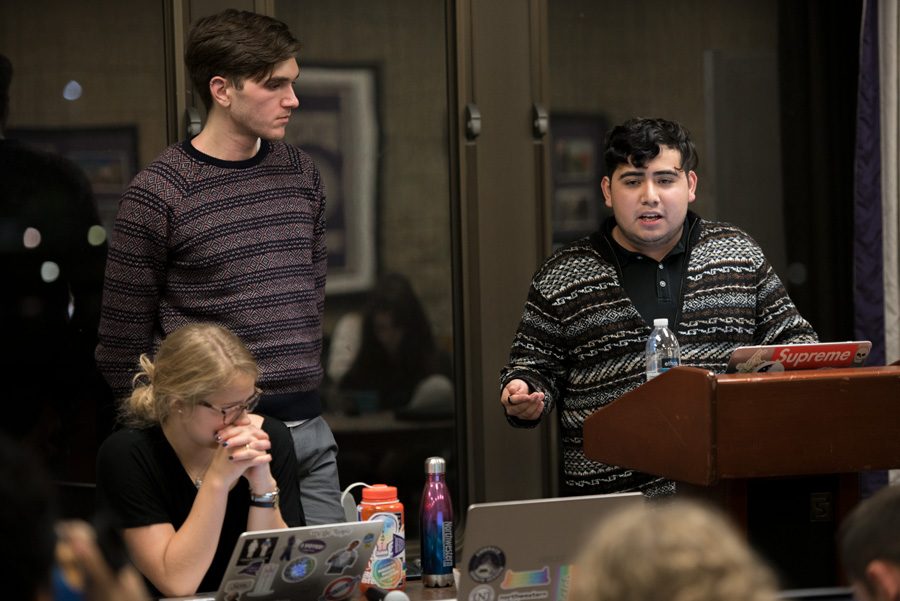 Daniel Rodriguez and Campbell Schafer at a previous ASG meeting. Rodriguez and Schafer both contributed to the original resolution.

Associated Student Government passed a resolution in 2019 to standardize name and pronoun usage across Northwestern platforms. Now, the co-writers and sponsors are communicating with the University to follow through on these gender-affirming changes.

The original resolution called for CAESAR, Canvas, email servers and students’ Wildcards to display their pronouns and names, with the option of opting out for privacy. Currently, ASG senators are continuing discussions with the Office of the Registrar and NU Information Technology to implement the measure.

Weinberg junior Campbell Schafer said it is especially important to reaffirm names and pronouns during a remote quarter. Because a student’s first introduction to the campus community is now digital and based on their Zoom name or class profile, being able to display gender-affirming pronouns and names is “more relevant,” she said.

Dori-Taylor Carter, Weinberg sophomore and Rainbow Alliance external president, said the addition of pronouns and flexibility to write their own names removes situations in which students will have to explain their pronouns to others.

“Especially during COVID times when all that a person knows about you is your online presence, it’s all the more important that folks’ identities are validated or ratified through whatever means possible,” Carter said.

Carter also said continuing the practice of identifying pronouns for every student, regardless of whether or not a student is LGBTQ, contributes to normalizing pronouns and creating a more inclusive community at NU.

However, Rainbow Alliance Executive Officer and ASG Senate member Jo Scaletty said they haven’t been able to see the resolution in action this year.

“When I look into a classroom of people, I don’t see very many people with their pronouns in their (Zoom) name,” Scaletty said.

The Communication sophomore said they don’t feel comfortable putting their pronouns in their Zoom name because they don’t see that other students are doing so.

Scaletty added they did not know displaying pronouns was an option on Canvas, which is a “testament to how little the University has done” to publicize the resolution to standardize pronouns.

Pronouns are essential to a person’s identity, regardless of whether or not they agree with your gender assigned at birth, as Scaletty puts it.

SESP junior Daniel Rodriguez, ASG executive officer of justice and inclusion, said working to make pronouns more accessible and normal to talk about can help foster a stronger sense of community for NU students, especially when they are unable to be together.

“The fact that this legislation passed or someplace has begun to normalize the conversation around it,” Rodriguez said. “That’s huge for the classroom community.”

Standardizing pronouns is possible, Carter said. Because the implementation of ASG’s resolution has become more feasible in a virtual setting, she said she hopes the resolution and practice of speaking about pronouns will “transcend into what was already important when we were on campus.”

“(Pronouns have) always been important,” Carter said. “But, what can we do right now in this COVID moment to support each other and ourselves in a way that recognizes the fact that we’re in this pandemic.”