As results slowly roll in, students see results of their work with state Democratic campaigns 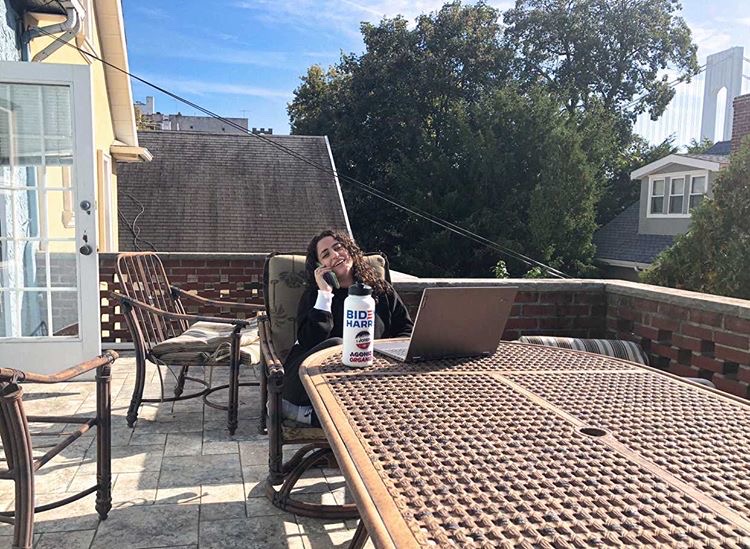 Linda Sandor (SESP ‘20) makes calls as part of her job with the Democratic Party of Wisconsin.

After graduating from Northwestern this past year, Linda Sandor (SESP ’20) knew she wanted to be involved in politics.

She’d taken a speechwriting class with political science Prof. Cody Keenan (Weinberg ’02) her senior year, and at his suggestion, got involved with Organizing Corps 2020 — which led her to a job with the Democratic Party of Wisconsin.

It’s a job she said she’s wanted since 2016, when President Donald Trump was elected to his first term.

“I was totally blindsided on Election Night,” Sandor said of the 2016 election. “I knew I would be graduating in 2020, and I knew I wanted to work on the campaign of whatever Democrat was running against Trump that year.”

As the nation awaits the results of the presidential election, Sandor is one of many current and former NU students who have dedicated their time to the election for much longer than the first week of November. Through Organizing Corps, Sandor was accepted into a training program for field organizing in Wisconsin, after which she applied to a field organizing job with the Democratic Party of Wisconsin.

Sandor’s remote job involves volunteer recruitment and management, as well as phone banking and volunteer training. She was ecstatic to see Wisconsin flip blue on Wednesday, especially after working countless hours over the past few months to register new voters in what may be a record national turnout.

“What we did in Wisconsin this year was so much bigger than just flipping it blue for Biden,” Sandor said. “We contributed to this long-term, progressive movement in Wisconsin that’s strengthening the party for years to come.”

Communication senior Stella Cole also got involved with a state’s Democratic party this election season. She became a fellow for One Campaign For Michigan, the Michigan Democratic Party’s effort to elect former Vice President Joe Biden to the presidency and re-elect U.S. Sen. Gary Peters (D-Mich.). Michigan also flipped blue on Wednesday for Biden, and Peters was narrowly elected to a second term.

Cole had never participated in a political campaign before, but events over the past few months inspired her involvement.

“Especially with all the momentum the Black Lives Matter movement has seen in the last six months, I felt like I had to get involved,” Cole said. “It didn’t really feel like a choice.”

Like Sandor, Cole’s work also involves virtual activities like phone banking and training new volunteers. However, leading up to this week’s election, the Biden campaign shifted to a hybrid model of organizing in Michigan, allowing Cole to knock on doors and interact with voters on the ground.

Cole said her involvement gave her a different perspective on the election — one that allowed her to see the realities of how people vote in a battleground state like Michigan.

Communication senior Sophia Blake spent the beginning of this year volunteering for U.S. Sen. Elizabeth Warren’s (D-Mass.) presidential campaign, where she canvassed in Iowa and spoke with rural voters. But after Biden won the Democratic nomination, she shifted her energy toward other Democratic races down the ballot.

“(Collins) is really in Trump’s pocket,” Blake said. “When I heard that there was a fairly progressive, younger woman running against her, I was very excited about that.”

After Gideon won the nomination in July, her campaign was absorbed into the Maine Democratic Party, where Blake continued her internship. As a result, Blake also began making calls and campaigning for Biden, as well as down-ballot candidates.

Gideon conceded the race for the Senate seat to Collins on Wednesday. But due to her work within the broader Maine Democratic Party, Blake was still able to make an impact on races up and down the ballot — like with U.S. Rep. Chellie Pingree (D-Maine), who won re-election to represent Maine’s 1st Congressional District. She was also able to work with others who initially supported different candidates in the Democratic presidential primary than she had.

“Seeing everybody in this campaign world kind of come together around this and recognize the importance of… attaining the presidency has been really beautiful,” Blake said. “And seeing a lot of my friends from the Warren campaign be able to make that transition helped me get behind it.”

— ‘This is not what democracy looks like:’ Northwestern students travel to Iowa to canvass for candidates, attend historic caucuses