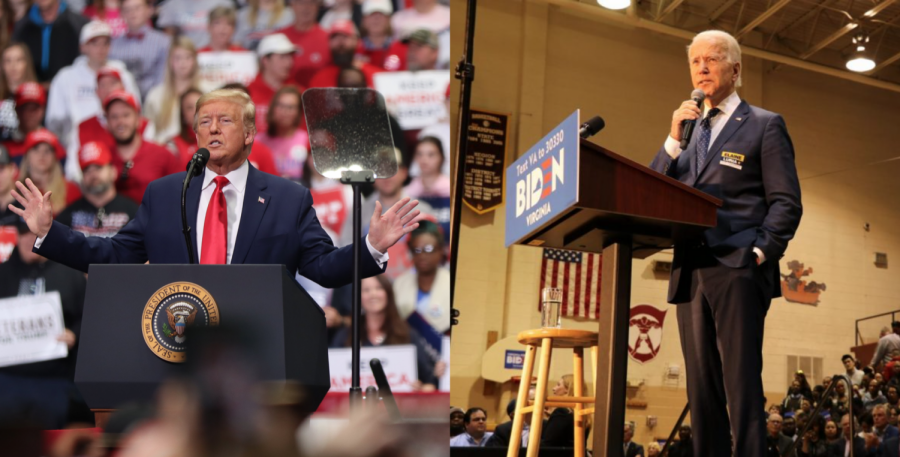 President Donald Trump and Vice President Joe Biden. The two candidates remain deadlocked in an election with no clear winner yet.

It might be days until Americans know who will next take the Oval Office.

As election data slowly rolled in Tuesday night, it became increasingly apparent that Democratic hopes for a decisive landslide had given way to an unclear path to 270 electoral votes. With incumbent President Donald Trump winning Florida, former Vice President Joe Biden up in Arizona, and other battleground states like Michigan and Pennsylvania counting overwhelming numbers of ballots into Wednesday, the race was too close to project a winner.

“We feel good about where we are,” Biden said to supporters in Wilmington, Del. just before midnight CST. “We really do. I’m here to tell you tonight, we believe we’re on track to win this election.”

Meanwhile, Trump claimed he’d be heading to the U.S. Supreme Court to stop voting across the country, falsely telling unmasked supporters in the East Room of the White House at around 1:30 a.m. CST, “As far as I am concerned, we have already won.” By that point, millions of votes had yet to be counted in key states like Pennsylvania, Michigan and Wisconsin. No national outlet had called the race because neither candidate reached the necessary threshold.

With nearly 100 million votes having been cast before Nov. 3, the question entering Election Day was how much of the final tally would be counted after polls closed. In the week leading up to Nov. 3, the Supreme Court allowed extensions of mail-in ballot reception in Pennsylvania and North Carolina, meaning votes could continue to be counted three and nine days after the election, respectively.

But the Supreme Court left the door open for cases to be brought again. In those rulings, it decided there was no justification for the process to be expedited before Election Day, according to Pritzker Prof. Dan Rodriguez, the former Law School dean.

The campaigns have been bolstering their legal teams and preparing for a bitterly disputed race — a prospect made all the more likely after Tuesday. Before the polls could even close on Tuesday, the 2020 election was the most litigated campaign in recent memory. Though Pritzker Prof. Michael Kang said he expects the amount of election-related litigation will ultimately hit record numbers, the prospect of post-election lawsuits largely depends on the margins of victory, he added.

“It’s conditional on how close the races are, because that is gonna determine whether it makes sense for the losing candidate to bring these kinds of challenges,” Kang said Tuesday afternoon. “If you assume Trump loses a state like Pennsylvania, or Minnesota, or North Carolina, and it looks like the ballots that are received after Election Day — but during the time before the extended deadline — and those votes might change the outcome, then I would bet my life you’d see a challenge on that.”

Though the results in Pennsylvania are still uncertain, one Northwestern professor said his predictive model — which is based on betting markets, not public opinion polls — suggests a high level of correlation between the Keystone State and Florida, where Trump currently leads.

Thomas Miller, faculty director of NU’s master’s in data science program, runs The Virtual Tout, an election forecasting model that gave Biden a 76 percent chance of winning entering Tuesday morning. According to his model, Arizona’s results are highly correlated with Pennsylvania’s numbers — an outcome that would be highly favorable for Democrats.

Students experience waves of hope, stress as night gets too close to call

McCormick junior Nora Chambers was tired and alone Tuesday night. She’d been up since 4:15 a.m., spending the entire day working the polls in Chicago — a final civic addition to the phone banking and swing-state canvassing she’d been participating in throughout the election cycle. By the time she finally arrived home in Evanston, watching an increasing number of Republican votes slowly trickle in transformed her fatigue into demoralization.

“I feel bamboozled,” Chambers said. “All the pollsters were saying Biden had these big leads in a lot of states, and that they changed their polling methodology from 2016, and that even if there was an error as big as (Clinton’s), Biden would still win by a lot — but it’s looking like it’s actually pretty close.”

On the other hand, McCormick junior Ryan Abbott said he’s had a notably “regular” and calm day, opting to intermittently check the results and his NU College Republicans Election Watch group chat between homework.

Despite Biden’s lead early in the night, Abbott, the NUCR secretary of public relations, said there was a general sense of confidence amongst the group Tuesday night that Trump will pull off a victory and Republicans will hold the Senate. Abbott added that he and members of NUCR believe the race will “certainly be close” and there will “certainly be lawsuits.”

“No one is going off the walls, but no one is dejected,” Abbott said. “But I’d be lying if I told you I didn’t expect anything to go over easily… I won’t be surprised if it makes its way all the way into the courts.”

If Trump isn’t able to maintain the presidency, Abbott noted that while he and other campus Republicans will be disappointed, he doesn’t believe that “anyone’s going to feel like it’s the end of the world.”

Although some of her peers in Political Union continue to remain hopeful for a Biden win, Public Relations Chair Pamela Chen was more cynical. The Weinberg junior said she wasn’t surprised as she watched Florida, Georgia and North Carolina redden throughout the night, as she expects Trump to clinch the election.

However, she didn’t see the results playing out as smoothly among the student body as Abbott posited. Chen said she believes protests could ensue if Trump wins, especially as “a lot of students’ lives are directly impacted by the outcome of tonight’s election.”

While he’s stayed hopeful about Biden’s chances of picking off Michigan and Wisconsin to edge his way to a win, SESP senior Jacob Jordan said his nerves of a second Trump term haven’t calmed. He added it’s disappointing and depressing to see “just how fundamentally indecent such a large portion of the American public really is” as more and more counties vote in the president’s favor.

“A lot of the people I’m watching the election with, we’re all on edge and we’re all emotional because we realize how much this election matters,” Jordan said. “I don’t plan on getting much sleep tonight. I feel like the future of our country is a little more important than my sleep.”