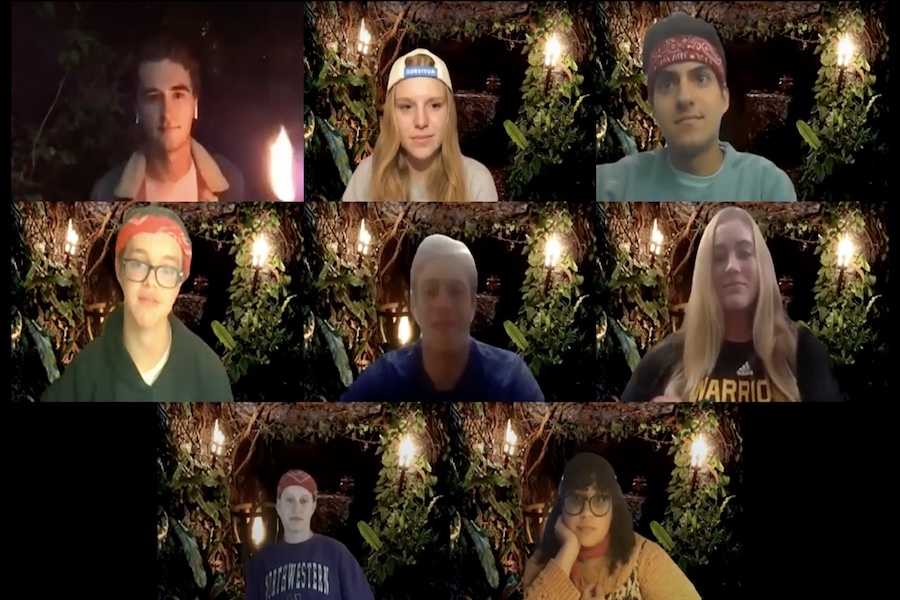 A group of contestants meet over Zoom. NU’s “Survivor” is currently in its fourth week of filming.

CBS’s hit television show “Survivor” tests competitors’ physical, mental and social strength by subjecting them to grueling challenges and pitting them against one another in an exciting, action-packed season. Northwestern’s adaptation of the show is no different.

NU’s “Survivor” wrapped up its first season, the second half of which was filmed on Zoom, last school year, and are now in the fourth week of filming for season two. This time there are 18 competitors and the competition is entirely virtual, with the exception of a few in-person challenges for those in Evanston.

While doing the show on an online platform was not what Weinberg senior and executive producer Carson Knoer had in mind, he said filming season two has been very successful so far, due largely to the dedication of this year’s cast. Since getting cast in the real show is incredibly challenging, giving both NU students who grew up watching “Survivor” and those who have not seen an episode an opportunity to participate in the popular franchise was unique and special.

“We’re giving them an opportunity to live their dreams, to challenge themselves and see if they’re as good at the social manipulation that they expect they will be,” Knoer said. “I know just the ‘clout’ that comes with winning is the true prize, like the winner of season one is highly regarded.”

While season one is being edited and set to release in early 2021, Knoer and the rest of the production team have been busy coming up with engaging challenges that could be performed remotely. So far, these have included everything from puzzles and fitness tasks to making haunted houses out of materials in contestants’ homes and blending hot dogs into smoothies.

One of the members of the cast, who wished to remain anonymous so as to not give away her strategy, said the experience has pushed her more than she expected, and she spends the majority of her free time coming up with tactics to keep her in the fight. Right now her main techniques include growing close with her fellow contestants in order to build strong social bonds.

“You want to connect with people past a surface level interaction and don’t want to come off as a huge threat,” she said. “There’s a few people who have already painted themselves as schemers, so a strategy is to use those people as shields so the target is not on their backs.”

While host and Communication sophomore Kylie Boyd did not reach her dreams of participating on the actual show, she happily “settled” for NU’s version. As a contestant on last year’s season and a host on this one, Boyd has certainly built her “Survivor” repertoire. Her fear? Living up to the “legendary host” Jeff Probst.

While Boyd has mimicked Probst’s catchphrases and “Joutfits,” which Boyd describes as Jeff Probst’s outfits, Boyd aspires to bring something of her own to the role, she said.

“We’re not trying to just copy him, we want to bring our own aspects so that we don’t feel we need to do it the same exact way,” Boyd said. “We’re definitely trying to match his charisma and energy, but it’s a tall order.”

Knoer said the same thing drives participants both at NU and on the real show: the desire to prove themselves. The show gives people an opportunity like no other to explore themselves and their manipulation tactics.

“Survivor gives you the opportunity to be someone you can’t be in your regular life,” Knoer said. “You’re encouraged to be manipulative or to be strategic, and getting the opportunity to see how well you can control narrative and the actions of other people to benefit yourself is really interesting and an insight to your skill set that you can’t get any other way.”