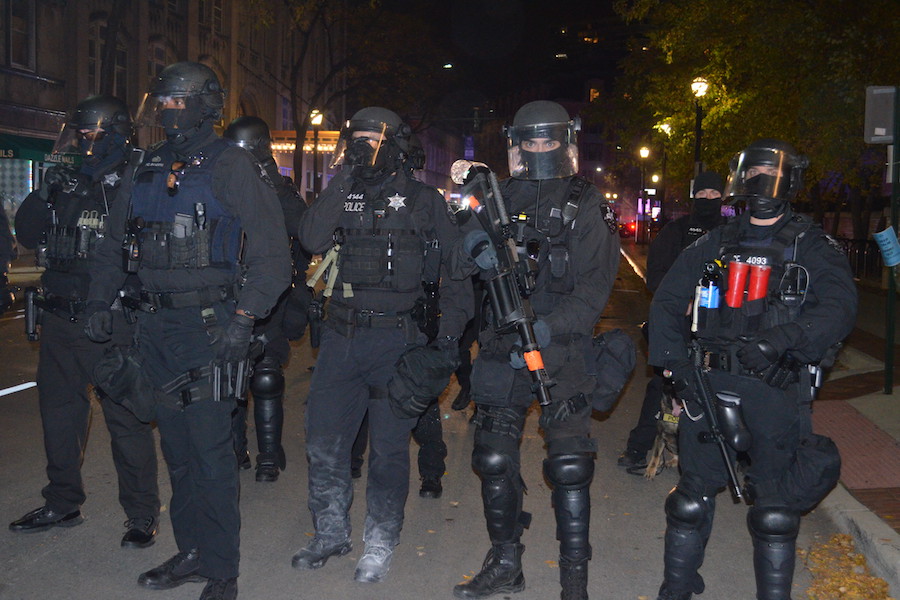 Students pepper-sprayed, one arrested during Halloween action to abolish NUPD

Evanston Police Department and Northern Illinois Police Alarm System’s Mobile Field Force officers, who have been assisting EPD with protest management over the last few weeks, flanked the crowd of about 150 students from their starting location at the John Evans Alumni Center to the street outside the Evanston Public Library where they unleashed pepper spray and fired pepperballs.

“I just remember the intense feeling of fear for my safety,” one student protestor said. “And then I remember thinking, well, that’s fine, that’s what I’m supposed to feel, right? Because they have weapons. And that’s exactly what they’re trying to do.”

Following the escalation, protestors retreated, chanting “We’re gonna disperse, police” and ducking behind a line of umbrellas to protect from ammunition and identification. Over 30 officers followed the crowd closely on the sides and around the back, holding batons, pepperball guns and what one medic identified as less-lethal multi-grenade launchers — typically used for flashbangs, tear gas or other impact munition — at the ready.

Signs of a storm to come

For the first hour and a half of the action, students marched with little incidence.

The group marched northwest from the Alumni Center, pausing outside the Rebecca Crown Center — the office of some central administrators — to spray-paint messages condemning the University and then moved south on Orrington Avenue. At least one group member would sporadically release a firecracker into an open street as the crowd chanted and walked.

The goal, one protestor said, was to disrupt past the point of what the University would deem acceptable.

“We’re really here just to show them what sense of urgency we have,” they added. “And how serious we are about abolition.”

According to several student organizers, tension increased when the group turned off Orrington Avenue and began walking east on Church Street. That is when, one protestor alleged, police officers closed in on the crowd.

“I remember looking behind me and thinking ‘Wow, there’s a lot of bike marshals,’” she said. “And then I look again and I’m like, ‘Wait a minute, those are cops. And they’re closer to us than I’ve ever seen them before.’”

At least two organizers in the back of the crowd and one organizer in the front of the crowd said it appeared that the police were attempting what the front organizer called “kettling” — or surrounding a group and closing them in, so as to perform a mass arrest.

Escalation, as it happened

According to several organizers in the back of the crowd, as police continued to follow the crowd east on Church Street, they eventually tried to go around the side of the group. In order to prevent the group from being surrounded, an organizer said, they started calling for protestors with bikes to block the sidewalk so officers could not pass.

But not enough bikers moved to the sidewalk. One organizer said it was because the group was smaller than anticipated. Another organizer guessed it was because protestors in the back row, who were shielding their faces with umbrellas, could not clearly make out the situation.

Without enough bikes, when one protestor moved to the sidewalk and refused to move, she was immediately surrounded by several police, the organizers said.

Several protestors in the back row of the crowd attempted to intervene to prevent the arrest but were unsuccessful. The police shoved them back forcefully and unleashed pepper spray. One protestor was sprayed in the mouth, they said. Struggling to breathe, the protestor said they lost track of the protestor being detained.

NIPAS threw the protestor to the ground, pinned her to the sidewalk and zip-tied her hands together. Meanwhile, other officers forcibly shoved the crowd backward, weapons drawn. They employed pepper spray and an impact round — what appeared to be pepperballs. At this point, the group began to retreat.

“I think one of the most stressful things about being in the back was just trying to get people to keep moving,” one organizer said. “We could not have any kind of gaps because it’s only through numbers and through communities of care that we’re all going to get through this.”

As they backed up they sang “This Little Light of Mine.” They walked to the intersection of Maple Avenue and Davis Street, where they dispersed in smaller groups.

In a press release, EPD described police aggression as triggered by rocks, stones and fireworks being thrown at officers, lasers being pointed in their eyes and property damage — spray-painted sidewalks and broken windows at Whole Foods Market.

Several protestors described the fireworks and lasers as distraction tactics to prevent arrest and protect identity, not intended to maim. The fixation on property as a justification for police aggression was something many protestors found frustrating.

“They don’t care about anybody’s lives, they’re just protecting property instead,” one protestor said. “And it’s not the same. Property can be fixed. Property can (be replaced). All the people who are traumatized now and all the people whose lives are destroyed by cops and by the military all over the world is nothing compared to what we could do by busting a window.”

“The escalation was entirely initiated by the cops,” one protestor said, adding that they feel some reports from Chicago media Sunday morning inaccurately framed the protestors as violent.

Meanwhile, following dispersal, several protestors who were standing in the back of the crowd when pepper spray was released were suffering severe injury. One team of three medics reported treating a total of nine people and at least five more medics were on the scene treating others. Chloé Archuleta, a Ph.D. candidate, said she and her friend were sprayed directly.

“My friend got hit in the face, so she starts crying and freaking out,” Archuleta said. “So I’m holding on to her, trying to move back, shouting for a medic… And then (the pepper spray) got in my contacts and I had to rip them out.”

One protestor hit by pepper spray experienced respiratory distress and was taken to the hospital, two medics reported.

The apprehended protestor was detained at the EPD precinct for about six hours. After the crowd dispersed, a group of about 20 students returned to the street outside the precinct with blankets, snacks, coffee and hot chocolate waiting for her to be released.

She was released at around 4:30 a.m. Members of NUCNC assisted her with paying bond and she was greeted with a round of cheers as group members wrapped a blanket around her. According to NUCNC members, she was charged with a misdemeanor.

“I’m still really sad about it,” one protestor said. “That we weren’t able to keep her safe. And that she was alone.”

The University’s statement to The Daily cited EPD’s account of the night’s events, including that EPD deployed pepper spray and arrested one NU student in response to protestors allegedly throwing bricks, lit fireworks and smoke bombs at police officers, and shining lasers into their eyes. University spokesperson Jon Yates said University Police was not involved in the incident once it moved beyond the University’s jurisdiction.

Yates added that while Northwestern supports the right to protest, the University does not condone breaking the law and violators “will be held accountable through our processes.”

Saturday’s action coincided with Halloween and as protestors marched through the streets, many costumed and belligerent students passed by. Some took photos, some heckled at the crowd and others remained disengaged. As police activity escalated, residents watched from the windows of their apartments, some in costume.

One protestor said that when they walked back from the action, they saw a Halloween party with a large crowd of people that was clearly ignoring COVID-19 regulations. Simultaneously, they said University Police in a parked car appeared to be guarding the Weber Arch from vandalism.

As an abolitionist, the protestor does not support police intervention as a way to enforce social distancing. But contrast in police action between public health regulations and the protestors on Saturday showcased the University’s priorities.

“You all know Halloween parties are happening right now,” they said, referring to UP, “but you’re putting all this money and all this time into brutalizing Black students.”

Correction: A previous version of this story misstated a University spokesperson’s accounts of damage. The story has been updated to accurately portray the University’s statement. The Daily regrets the error.