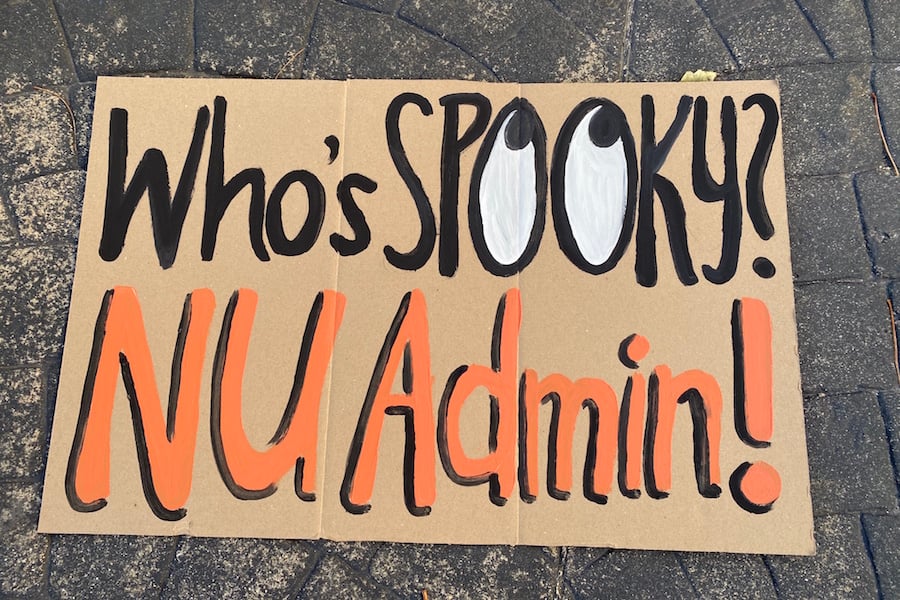 A sign from Friday’s protest. The teach-in included a range of abolitionist speakers and a Halloween-themed learning activity.

After gathering at The Rock, marchers headed to the intersection of Chicago Avenue and Church Street, where they formed a large circle. There, NU Community Not Cops and NU Graduate Workers hosted a teach-in, featuring a broad range of speakers with abolitionist messages.

The 19th day of NUCNC action commenced with a land acknowledgment of the tribal lands on which Chicago and Evanston sit, with NUGW leaders highlighting the importance of Black and Indigenous solidarity. Leadership from NUGW then introduced the goals of the organization, which included union recognition and the right to bargain over their own working conditions.

“At NUGW, we know that for Black graduate workers and for workers experiencing racist oppression on this campus across the city and across the world that police are one of the most egregious and harmful workplace abuses there is,” one NUGW leader said.

NUGW’s support for NUCNC, the speaker said, goes beyond solidarity. Police abolition, they said, means a “reduction in the harm faced by Black graduate workers” at their places of work.

The speaker told the story of former NU graduate student Lawrence Crosby, a Black Ph.D. candidate who was wrongfully arrested and beaten by Evanston Police in 2015. A woman called the police on Crosby, who she believed was engaging in a car theft, when he was attempting to fix something on his own car. The speaker said the attack was “enraging” and “unacceptable,” emphasizing that racialized police violence will continue so long as the police continue to exist.

A STEM graduate worker then read a collective statement from STEM graduate students, discussing unsafe working conditions during the pandemic, which included limited testing and no access to safe transportation.

“We are expected to be equally productive as pre-pandemic times to bring in money for the University, while the work and advice of actual epidemiologists and immunologists at this University are ignored,” the graduate worker said.

The speaker connected the mistreatment of STEM graduate workers to police abolition, saying the administration’s responses to graduate workers complaints about conditions and student demands against UP were similarly inadequate.

In another speech, a NU librarian asked students to imagine a world without police.

“Abolition is all of us,” the librarian said. “Actions like abolition are ever-present, always active approaches rooted in community and care.”

An organizer then spoke directly to the faculty in attendance, asking them to consider the stress their students are under while they are conducting their classes. Not all NU students, the organizer said, are “rich people” who are “sheltered away” from the harsh realities of the world.

The teach-in ended with a Halloween-themed learning game. Organizers asked the crowd if various actions would be categorized as “treats” of abolition or “tricks” of reform. University actions, such as the formation of “advisory boards” and the creation of “sensitivity training,” were called “tricks” by protesters.

“Police reform is candy corn,” protesters chanted. “Stale and gross since we were born.”