Borrok: The storm rages on 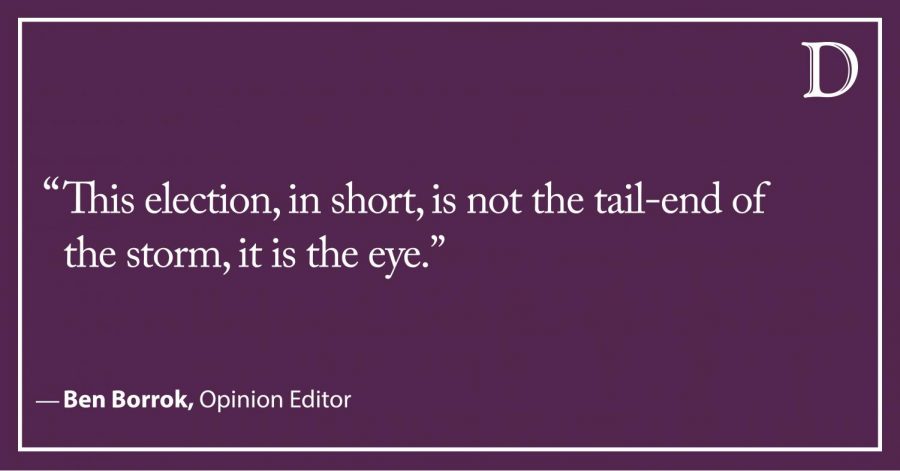 At the end of the summer, I spent some time on the East Coast, where I stayed in a house right on the beach. After days of relaxation, a storm rolled in from the shore, the sky darkened and the wind picked up. As it dropped buckets of rain on us, it also churned the ocean into a frenzy, with wave after wave pounding against the sand. It felt as if the storm would never end.

We are less than a week away from the election and I find myself returning to this memory quite often. I couldn’t understand the relation between the two until I remembered that a friend mentioned that they were “so excited for this storm to pass.” I was taken aback by the idea that this political and social storm we have been experiencing would just suddenly disappear. As if election results would clear the metaphorical skies, and bring to a close the thunderous protests over inequality and discrimination in our country. Far too many people see this election as some sort of final reckoning, that we weathered the storm and could come out the other side unbroken if their preferred candidate is chosen. Well, the reality will be sure to disappoint them.

There is this idea that we owe gratitude to politicians for granting us rights and protecting our freedoms, rather than acknowledging our own power. Today, people are so convinced that politicians can do no wrong that we rarely see pushback from the electorate. Instead, people adjust their moral compass, overlooking any information that may force them to reconcile with what their values have become. Dissenters are silenced, treated by these people as traitors to the cause. Politicians are gods to them, harboring the power to mold America their light.

I fear that, when it is all said and done, the election will create a false sense of calm in many, retreating to an opinion that, once again, politics doesn’t really affect them. The storm that has thrashed against their windows for the past four years may be gone, so why continue to worry? It is in human nature to lose enthusiasm in a movement after an extended period of time, people rarely stay committed long enough to see it through. Those who do are considered inspiring and dedicated, never folding on their aspirations. The current fight for equality and equity, however, cannot afford to lose support.

The recent boost of activism into the mainstream has forced many to call into question the society around them. It has opened the eyes of many to the struggles that minority populations face in America. But at the same time, some have co-opted this movement, trying to ally it with a political organization that has never really had their preferences in mind. This candidate speaks more to the center than he does the young people of his party, banking on the fact that his opponent is so widely despised that they would be forced to support him. His policies do not address these hotly contested issues, so why would the protests fade with his election?

This election, in short, is not the tail-end of the storm — it is the eye. Rather than deferring to our elected officials, especially ones who will not make change without pressure, we must continue to seek what is right. Politics should not be treated like a high school spirit week, those divisions do not suddenly vanish like they do at a pep rally. There will still be racism, sexism and homophobia after November 3. There must remain a majority of people who are dedicated to fighting them.

It is easy to be tempted into assuming that the worst is over, but when has monumental change happened over night? The storm will continue to rage on. We must adapt to live in it.