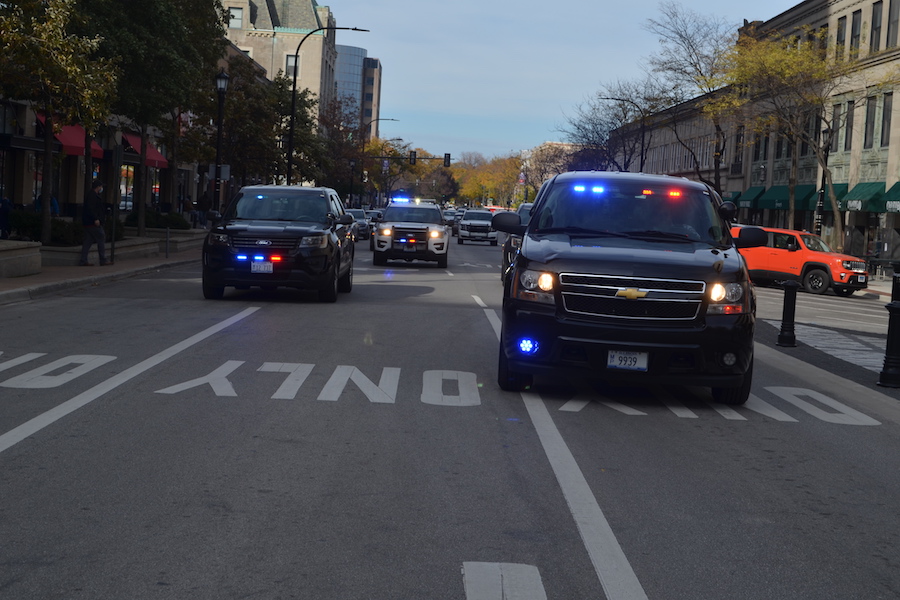 Wednesday marks the 17th consecutive day of action led by NUCNC demanding the abolition of University Police. When the group paused outside the EPD precinct, one car issued a warning over the intercom saying “local law will be enforced by citation or arrest.”

Students led by NU Community Not Cops marched to the Evanston Police Department precinct Wednesday in honor of Walter Wallace Jr. — a 27-year-old Black man who Philadelphia police fatally shot Monday while he was experiencing a mental health crisis — and in solidarity with protests that have erupted in Philadelphia as a response.

After gathering at Arne and Mary Oldberg Park at the corner of Clark Street and Sherman Avenue, the group marched toward the EPD precinct. Students chanted and played the drums as music played on speakers. Because the action landed in the middle of a school day, Wednesday’s march attracted a smaller crowd — about 50 people — than in previous days.

“There’s less of us, so that means we have to be very loud to make up for it,” one organizer said at the start of the march.

The group was accompanied by at least 10 EPD and unmarked cars who followed the march and blocked traffic as marchers passed. When the group paused outside the EPD precinct, one car issued a warning over the intercom saying “local law will be enforced by citation or arrest.”

When the group passed the intersection of Ridge Avenue and Davis Street on their way to the dispersal location, one Evanston resident leaned out his window brandishing a Trump 2020 flag. The group responded by playing “FDT (F–k Donald Trump)” by YG and Nipsey Hussle on the speaker.

Sociology and African American Studies Prof. Mary Pattillo joined students at the beginning of the march and brought snacks before leaving to teach a class. She said she marched in support of the cause as well as the students.

Pattillo added that as multiple departments have released statements in response to University President Morton Schapiro’s recent email condemning protests, it is hard to differentiate between these statements and actual support for the abolitionist cause.

Outside the EPD precinct, group leaders thanked the crowd for showing up and expressed their solidarity with protests in Philadelphia, which have been escalating since Monday night leading to a citywide 9 p.m. curfew. As of Wednesday afternoon, a total of 172 arrests have been made and 53 police officers have been injured, CNN reported.