Northwestern students speak out about recent sexual harassment in Evanston 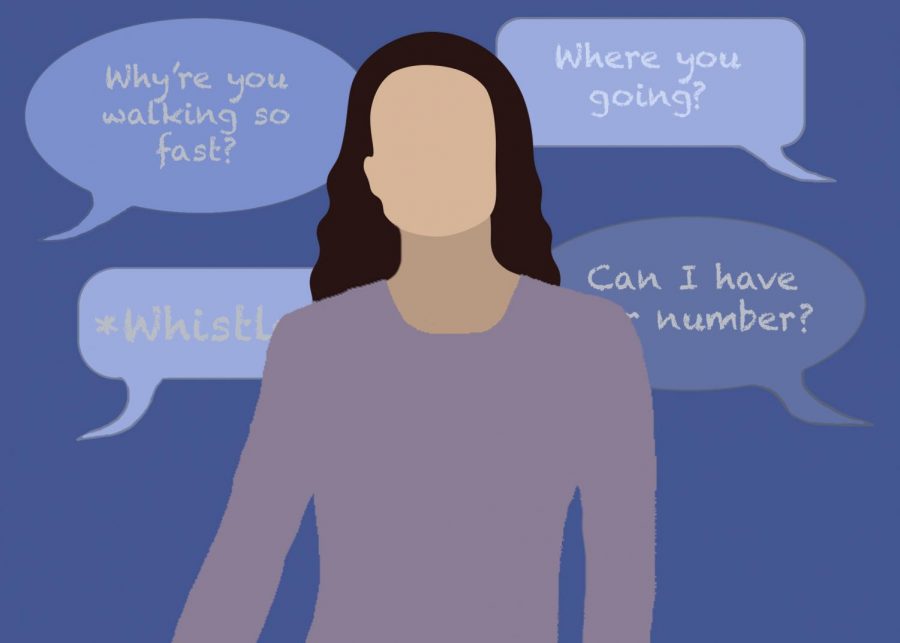 For many women at Northwestern, sexual harassment is an unfortunate reality.

Weinberg sophomore Cat Jacob was sitting on a Chicago Transit Authority train one evening, alone except for a man smoking a cigarette across from her. As the car departed from the Noyes station, she saw her phone was about to run out of battery. When she removed her earphones, which had been playing music, she noticed the man across the car was shouting at her.

“He was asking me over and over if I wanted his number, so I say no,” Jacob said. “Usually, that’s where (it ends), but this guy wanted a justification.”

For many, sexual harassment and catcalling is reality of public life.

A 2019 report by the UC San Diego Center on Gender Equity and Health found that in the U.S., 81 percent of women and 43 percent of men reported experiencing some form of sexual harassment in their lifetime, with the vast majority of these experiences taking place in public spaces.

Recently, women in Evanston have taken to social media to share their experiences being followed or harassed by men in the area — urging others to stay safe and be on alert.

Sexual harassment can be particularly worrisome when there are fewer people around, creating potential for the situation to escalate. That’s what Jacob was concerned about that evening on the train.

Jacob said in her experience, the quickest and easiest way to de-escalate a situation when you don’t know what the other person is going to do is to “confront it with another guy.” So she told the man she had a boyfriend.

This time, however, Jacob said the excuse didn’t work and the man continued to make her uncomfortable until she ultimately decided to switch cars while the train was moving.

Jacob said this is not the first time she has dealt with situations like this. Growing up in the area, she said she has had multiple encounters with harassment and even unwanted sexual contact, particularly on public transportation.

SESP sophomore Caroline Moseley said she too has experienced sexual harassment in Evanston, including a man grabbing and pulling at her skirt as she was walking in town.

A situation several weeks ago made her particularly uncomfortable. Moseley said she was walking to her apartment one night, when a group of men started shouting at her.

“I was just trying to ignore them and they were like, ‘Wait, where are you going, little mama?’ And started walking up to me,” she said. “I got really scared and ran all the way home.”

The UCSD study also found that in the vast majority of sexual harassment cases, women rarely confront their harasser and instead are more likely to change their own habits and routines to avoid a repeated experience.

Moseley said since that night, she has been more conscious of her surroundings, tries not to walk alone at night and carries pepper spray for emergencies. Additionally, she said, the experience impacted what she wears.

“I try to not dress in a way that shows too much skin, which I know I shouldn’t have to, but it’s something I try to be conscious of,” Moseley said.

Harassment is not a solely nocturnal event. Weinberg sophomore Isabel Gippo said she was walking with her roommate one afternoon when two men drove up to them, one getting out of the car to approach them. She said he asked questions about where they lived, what they were doing later and eventually if he could have their phone numbers.

Gippo said living off-campus and spending more time in the Evanston community has made her more aware of these incidents, and living on-campus last year felt more secluded and therefore more safe. However, Gippo said she doesn’t feel particularly unsafe in Evanston and that these encounters can happen anywhere.

“If I’m walking somewhere, I’m looking around and making sure no one’s behind me acting suspicious or following me,” Gippo said. “But I think that’s also just being a woman in general.”

Although some justify catcalling and harassment as compliments, Jacob said she disagrees.

She said the subject is layered and it’s difficult to describe exactly what circumstances would cause somebody to feel threatened. She said it varies with every person, and because of that, recommends to “err on the side of caution.”

“Calling somebody pretty in public is not a compliment,” she said. “It’s an overture to an escalating situation, even if it’s not meant that way.”

— Vargas: Facing my return to a country under Trump after quarter abroad