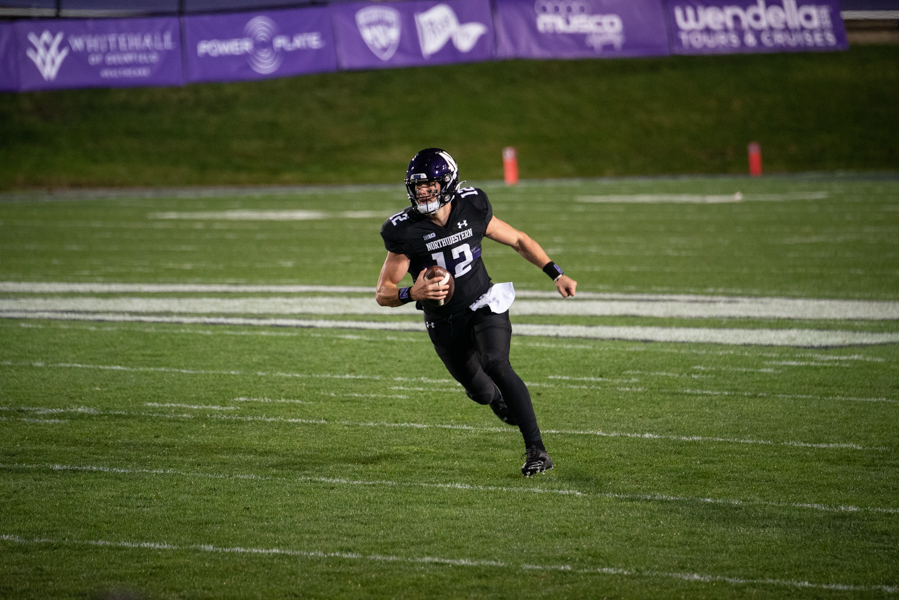 In nine of its 12 games last season, Northwestern’s offense couldn’t manage to cobble together more than 150 passing yards.

Saturday night, Peyton Ramsey did that and more — in one half.

The graduate transfer finished with 212 yards, 23 completions and two touchdowns — nearly all of which came in the night’s first two quarters — in his debut for the Wildcats, powering NU (1-0, 1-0 Big Ten) to a season-opening victory over Maryland (0-1, 0-1 Big Ten) at Ryan Field.

From that start, it was clear that Ramsey was a different quarterback, and the Cats’ offense a different character, than anything seen in 2019. NU was quickly forced onto third down on its opening drive, but Ramsey immediately converted it with an 11-yard pass to senior wideout Ramaud Chiaokhiao-Bowman, on a play that set up the Cats’ first touchdown of the season and hinted at how the rest of the night would go.

“Setting the tone early was something we talked about all week,” Ramsey said. “We wanted to start fast, and then after that you wanted to keep the pedal down, and that’s what we did.”

The Cats’ ensuing first-half drives all maintained that high-tempo pace. All six finished in less than three minutes and five ended with a score. Ramsey had success finding his playmakers, hitting seven different targets in the air and planting the ball in the hands of five different rushers.

“When you have that many different weapons, so many different guys who have the ability to make plays, you make yourself harder to defend,” Ramsey said. “That’s a credit to those guys on the outside. It was a lot of fun.”

Ramsey didn’t necessarily make any mind-blowing, jaw-dropping throws — his longest pass of the night came on a 23-yard dagger to redshirt freshman wideout Malik Washington on NU’s first drive of the game. But the signal-caller was impressive in his consistency. Most of his throws were middle-yardage passes into or over the middle, and he showed a fluidity and collectedness in the offense that was rarely seen in 2019.

While Ramsey commanded the attack under center and in the air, the offense as a whole operated remarkably smoothly. Sophomore running back Drake Anderson led all the game’s rushers with 103 yards on 10 attempts, and fellow sophomore Isaiah Bowser managed 70 yards on 23 attempts. The ground game finished with 325 yards and four touchdowns.

And despite preseason questions after senior Rashawn Slater opted-out, the offensive line had a strong night, giving Ramsey solid chunks of time to throw and the run game enough space to average 6.1 yards per carry. At left tackle, five-star true freshman Peter Skoronski was as good as advertised.

“We had over 300 rushing yards, and you can’t just do that alone,” Bowser said. “We follow the big guys, and they got us a lot of yards, a lot of touchdowns. We’re going to lean on them every game going forward.”

How much of Saturday’s offensive performance — 43 points, the most in a Big Ten game since 2017; 537 total yards, also the most since 2017 — should be attributed strictly to the Cats’ prowess and not a weak Terrapins defense will be determined as the season goes on. Though Iowa, NU’s Week 2 opponent, lost its season opener to Purdue, the Hawkeyes are likely to pose a more formidable challenge next Saturday.

But the night’s dominating win did show one main thing: 2019 and the offensive struggles that plagued that season are squarely in the past. The Mike Bajakian-created, Peyton Ramsey-led phase of Northwestern’s offense has begun.

“You would’ve thought this was [the offensive staff’s] 50th, or 70th, or 100th game together,” Fitzgerald said. “They’ve meshed and molded really well. Great first one, but a lot of work to do and great opponents ahead of us.”