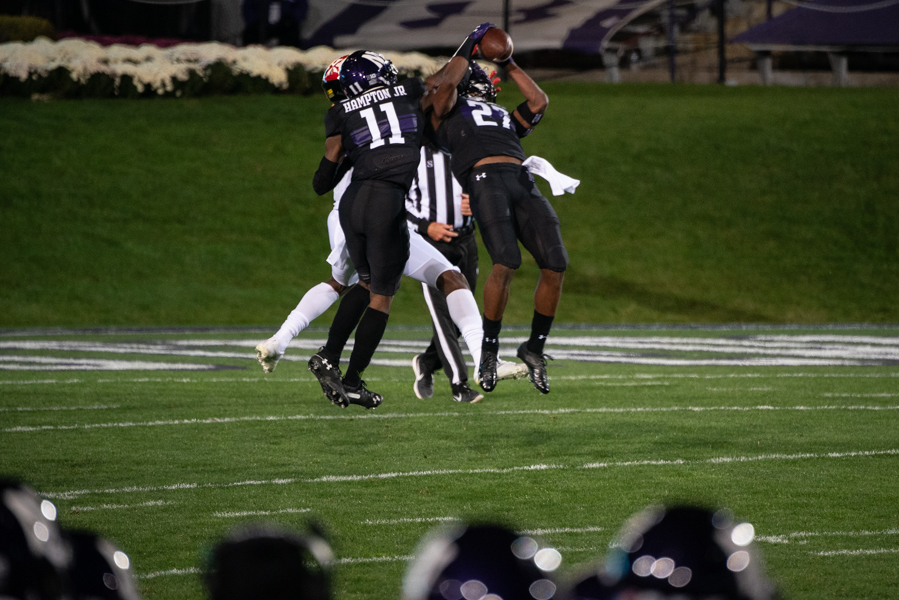 Coco Azema snags his first interception of the season. The freshman safety was one of three Wildcats with an interception.

In 2019, Northwestern’s secondary gave up 200 or more receiving yards eight times. So when one of the leaders of the unit — safety Travis Whillock — opted out of the 2020 season, it was fair to wonder whether the Wildcats’ cornerbacks and safeties would be a weak spot on defense.

“A lot of young guys played tonight,” Fitzgerald said. “I was really proud of the way that the entire secondary stepped up. A lot of plays being made all over the field today. Really, really fun to watch.”

While the Cats gave up 37 yards and six completions to quarterback Taulia Tagovailoa on the Terrapins’ first drive, the defense forced Maryland to settle for a field goal.

When Tagovailoa returned to the field, NU led 7-3 courtesy of junior running back Isaiah Bowser. Hampton made sure the Cats’ lead stayed intact.

Defending former five-star recruit Rakim Jarrett, Hampton read Tagovailoa’s throw perfectly, staying a step ahead of Jarrett as he snagged the ball out of the air before heading out of bounds for a smooth pick.

Hampton’s pick sparked a scoring drive for NU that culminated in an impressive 12-yard touchdown run by graduate quarterback Peyton Ramsey and put the Cats up 14-3.

Then it was Pace’s turn to get in on the action.

Dropping back in coverage, Pace ran beside receiver Dontay Demus Jr. as Tagovailoa heaved a pass while under pressure from senior defensive end Earnest Brown IV and sophomore defensive end Eku Leota. As the ball approached Demus, Pace leaped out and snagged the interception, maintaining possession as he hit the Ryan Field turf.

“That was a bang-and-go corner and they had run a bang earlier,” Pace said. “Pregame, coach Matt (MacPherson) came up to me, alerted me. He was like ‘watch out for this route.’ So that second time I just trusted it.”

After Pace’s pick, the secondary continued messing with Tagovailoa. Maryland’s quarterback fell victim to a well-played cornerback blitz by junior cornerback Cameron Ruiz, who came screaming around left tackle Jaelyn Duncan for a sack. He also threw an incomplete pass to Jarrett thanks to a safety blitz from Pace. By halftime, he only had 62 yards.

In the second half, the secondary continued making plays all over the field.

Freshman safety Brandon Joseph — who stepped into Whillock’s role after he opted out — prevented Maryland’s receivers from gaining yards after the catch with timely tackles, while redshirt freshman cornerback Rod Heard, who started in place of an injured Greg Newsome II, allowed only one catch in the last 30 minutes.

The two underclassmen, who were at the peak of the Cats’ tackling charts from the beginning of the game, finished as NU’s top tacklers in the 40-point win. Joseph made seven tackles with a tackle-for-loss, while Heard nabbed six takedowns and a pass breakup.

“That next man up mentality (is) something we preached all offseason,” Pace said. “It only takes one play. I think people have realized that and studying just in case they had the opportunity to go in.”

Another young safety also turned some heads on Saturday night. Azema — who was last seen rushing for 123 yards and a touchdown as a running back in last year’s season finale against Illinois— returned to his natural position and made a splash when he picked off Tagovailoa in the fourth quarter. On a deep shot from the Terrapin quarterback, Azema jumped to his left and climbed the ladder in front of wide receiver Darryl Jones for his first career interception.

Holding a Big Ten opponent to three points or less for the first time since 2017, the Cats’ defense has a lot to be confident about heading into a Halloween matchup at Iowa. Specifically for Pace, he knows that NU’s secondary — specifically the underclassmen — has the potential to lock down vertical threats across the conference.