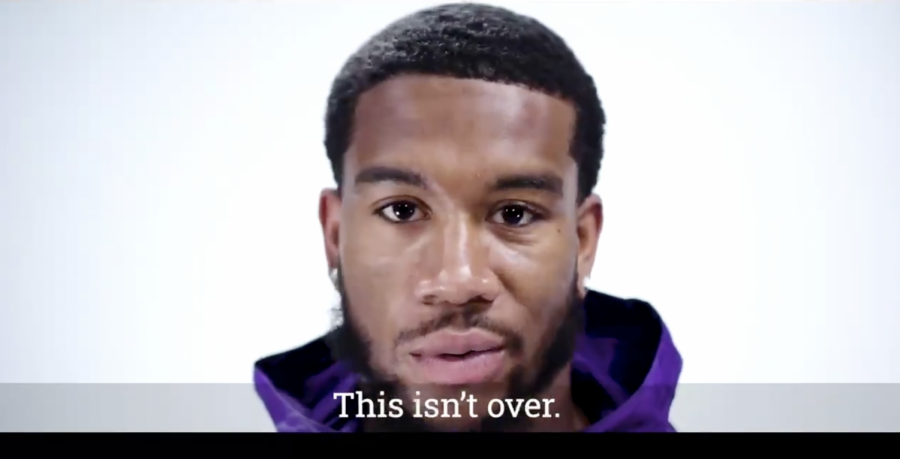 A screen grab from JR Pace’s Twitter video. NU’s senior safety spoke candidly about the experiences he and his teammates face as Black athletes.

In the video, posted three days before Northwestern’s season opener, Pace and other Black players on the football team were pictured as the Georgia native spoke candidly about his experiences as a Black man. Pace referenced his experiences wearing NU team gear so he and his teammates aren’t racially profiled, and feeling fear after watching videos of unarmed Black men dying at the hands of police.

If You Cheer Us, Hear Us pic.twitter.com/pAv7AJ7Q4l

Pace’s video was met with support from current teammates, former teammates and coach Pat Fitzgerald. The video was also shared by the athletic department’s primary Twitter and Instagram accounts.

These are not “just athletes.” These are sons and brothers and scholars and leaders. Are you listening yet? 🔊 https://t.co/7oEARnG31B

More than just jerseys out there! https://t.co/Q72eBIlV9U

In June, after the death of George Floyd, Northwestern athletic director Jim Phillips released a statement saying that he was committed to making sure the athletic department was active in engaging in the fight against racism and systemic injustices toward the Black community.

That same month, the NU Black Student-Athlete Alliance created a GoFundMe page for Rebuild the Hood, a non-profit organization “dedicated to revitalizing distressed communities by investing in small businesses and real estate.” The GoFundMe raised over $23,000 in the span of 25 days.

In a press conference in early August, Fitzgerald said the program had encouraged both group and individual conversations about sparking change, as social justice movements and protests increased across the country this summer.

In late August, Jacob Blake, who grew up in Evanston, was shot by police officers in his car in Kenosha, Wisc. Kenosha is the city where the football program annually stages its summer training camp. The program nor the athletic department did not release any official statement on its accounts, but Fitzgerald issued a reply with his thoughts on Twitter six days after the shooting.

Ella, hopeful the many many conversations I’ve had with current/former players/coaches, and friends in Kenosha, can be more productive than any statement. Some thoughts below if you need for story. Hope to see you back on campus soon. pic.twitter.com/rWYgkeppMK

Two months later, Pace has reignited the conversation inside NU athletics about continued action and support off the field from fans. At Northwestern, that action has been taking place on campus for the past week and a half.

Since Oct. 12, student organizers for Northwestern Community Not Cops have been calling for change, leading daily protests in Evanston demanding the abolition of University Police. Almost 150 days ago, students demanded that the University abolish the police department, and do not plan to stop protesting until NU does so.

President Morton Schapiro said in a statement on Monday that he has no intention of abolishing the police department, adding that the students’ peaceful protests had turned disruptive.

“I condemn, in the strongest possible terms, the overstepping of the protesters,” Schapiro wrote. “They have no right to menace members of our academic and surrounding communities.”

Though the athletic department has attempted to make strides within and create more pathways for athletes to speak out on systemic oppression they face, Black non-athletes on campus have still been met with silence from campus administration.

Several students associated with NU Community Not Cops said the video could have done more to promote the work other Black students were doing to abolish UP. More than a dozen people commented below the original post on Twitter, using the replies section to promote the organization’s mission.