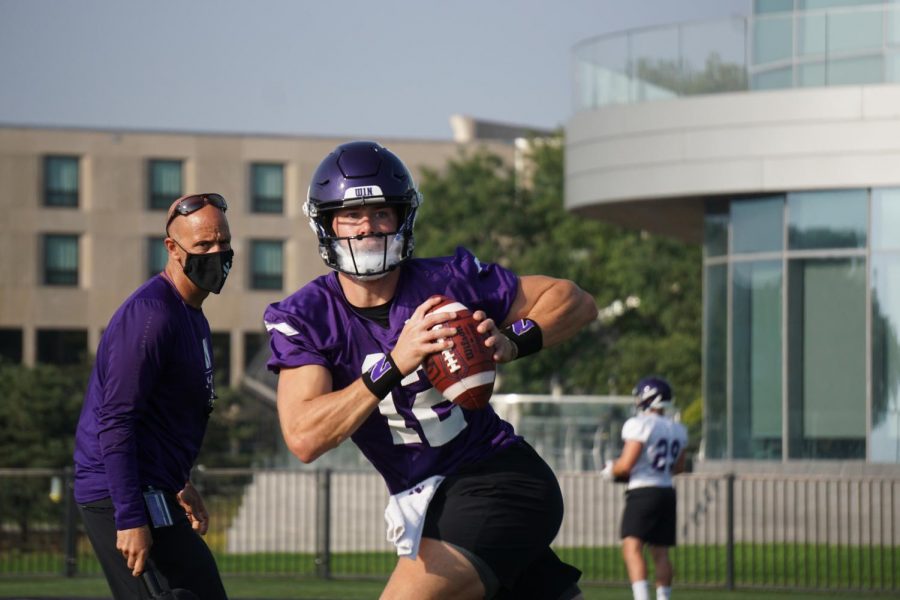 Peyton Ramsey during Northwestern’s preseason camp. The Indiana graduate transfer will line up under center in the Wildcats’ opener Saturday.

The last time Peyton Ramsey took the same field as a team wearing purple and white, he was trying to beat them.

The 6-foot-2, 220-pound quarterback came in near the end of the first half on Nov. 2, 2019, with his Indiana Hoosiers out to an early 24-3 lead against Northwestern. He played the next two quarters under center, finishing with 108 yards on seven completions and one touchdown as Indiana ran away with a 34-3 win.

Now, the next time Peyton Ramsey takes the same field as a team wearing purple and white, he’ll be leading them.

For some Northwestern fans, hearing Ramsey’s name might be a reminder of the past — of that 34-3 scoreline and the measly 112 yards NU’s three quarterbacks combined for that night in Bloomington. Yet now, as the coaching staff made clear with the season’s first depth chart release on Monday, there’s hope Ramsey is a sign of a brighter immediate future.

“From what I remember, he played a half or so against us (in 2019) and he played very well within that half,” senior linebacker Paddy Fisher said this week. “He’s a very good player, and I’m hoping he can do the same for four quarters with us against other teams.”

Ramsey already has three years of Big Ten football on his resume, an asset that might be more valuable than ever in this shortened-preseason, condensed-schedule of a 2020 season.

“I have experience playing against a lot of these different defenses, playing in Big Ten weather, the whole gambit,” Ramsey said on Monday. “I’ve played a lot of football (and am) really experienced, coming into a great experienced team. I’m looking forward to it.”

He brings an arm that threw for 6,581 yards in three years with the Hoosiers, earning him an All-Big Ten Honorable Mention in 2019 and a spot on the Johnny Unitas Award Watch List this year. In 19 conference games since 2017, he’s tallied 200 or more yards in 13 of them.

Transferring between schools in the same conference — especially as a quarterback — is relatively rare. According to a FiveThirtyEight list of quarterbacks who had transferred between 2000 and 2018 after throwing at least 50 passes at their previous school, only five of 52 players moved within their conference.

Of the three quarterbacks to move between Big Ten schools in the last two seasons — Ramsey, Brandon Peters (Michigan to Illinois) and Noah Vedral (Nebraska to Rutgers) — Ramsey has the strongest pedigree, with a bowl appearance and three 10-plus touchdown seasons under his belt.

“We got a dawg,” senior safety JR Pace said this week. “Peyton’s a playmaker. We’ve been excited to watch him during camp, and we’re definitely excited to watch what he’s going to do on Saturday.”

Even with his loaded resume, Ramsey didn’t stroll into Evanston and find his name already on top of the depth chart. With sixth-year T.J. Green, juniors Hunter Johnson and Andrew Marty, and underclassmen Zac Krause and Carl Richardson, the quarterback room was already crowded before Ramsey even announced his arrival in March.

But the Cincinnati native impressed from the get-go. He built relationships with his fellow offensive players on his initial visits to campus pre-pandemic, on a 300-mile drive to throw with his new wide receivers in May and throughout this shortened training camp this fall.

“He’s a guy who obviously loves the game and has clearly spent years of his life perfecting his craft as a quarterback,” senior right tackle Gunnar Vogel said. “The way he controls the offense, everybody’s really able to rally around him, and everybody has high expectations for him because he’s shown he can do it in practice.”

So despite the predictions of the last few months, there won’t be any 2019-esque, minutes-before-kickoff dramatic Twitter reveal for who will show up under center when the Cats walk out for their first possession against the Terrapins.

“We feel like we’ve got pretty good depth (in the quarterback room), but Peyton is QB1,” coach Pat Fitzgerald said this week. “I’m excited to watch him lead our team out Saturday night.”