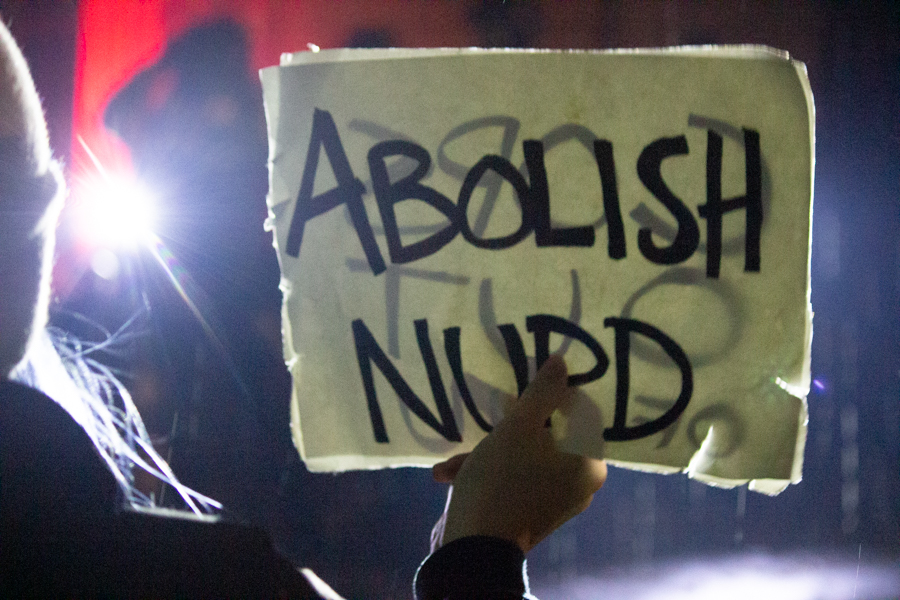 A protester holds a sign at a Wednesday night event. The event ended at Mayor Steve Hagerty’s house.

As Northwestern students and University President Morton Schapiro clash over demands around University Policy, Michael Nabors, president of Evanston’s chapter of the National Association for the Advancement of Colored People, has called for mediation between the two groups.

Around 300 students participated in a Saturday night protest that resulted in tagged buildings across campus and the city, including the University’s police department, a broken window at the Evanston Whole Foods and a burned NU banner, which was left at Schapiro’s house. The group called on Schapiro to respond to a June 3 petition with over 8,000 signatures, which asked the University to disarm, defund and disband UP and redistribute funds to institutions supporting NU’s Black students.

On Monday afternoon, Schapiro responded in a campus-wide email, condemning the protestors’ tactics and motives and saying he has “absolutely no intention” to abolish UP. Schapiro said the demonstrations have turned disruptive, and are “menac(ing) members of our academic and surrounding communities.” Additionally, Schapiro said he took personal offense to some of the chants from the Saturday event, including one where protestors chanted “piggy Morty” — a chant he said comes close to an anti-Semitic trope.

In a Thursday news release, Nabors said he was disheartened by the language displayed by both the protestors and Schapiro, and offered to mediate a peaceful discussion between the two parties so both could work toward a resolution.

“No one engaging in a just protest against racism can be anti-Semitic or have biases against any other group. That is hypocrisy,” Nabors said in the release. “At the same time, I am concerned language (sic) coming forth from the Office of the President… Such language makes it difficult to provide the opportunity for conversation, mediation and finding common ground.”

NUCNC also got the city involved on Wednesday night, when protestors went to Mayor Steve Hagerty’s house in response to statements Hagerty made to multiple media outlets in opposition of property damage the group has caused. In a Monday news release, the group said Schapiro “assign(ed) higher value to property than to the needs of the Black community” — which they also criticized Hagerty for because of his statements.